Joseph Burnett, the school’s founder, was the father of six boys, the eldest of whom was a student at St. Paul’s School of Concord, N.H. The headmaster of that private institution, founded a decade prior to St. Mark’s, suggested Burnett create a similar school in Massachusetts, one that Burnett’s other five boys could call home. Like so many St. Markers to follow, Burnett met the challenge that faced him. His goal was to offer a high-quality education, and to this day, St. Mark’s remains focused on excellent academics, provides a rigorous liberal arts program that stems from a classical tradition and prepares its students for the best colleges and universities.

In appearance, St. Mark’s has changed much since its founding. Then, the school was composed solely of one structure—a square, two-story house painted yellow with green blinds. That building and others from those early days, including a large schoolroom and dormitory wing built in 1866–1867, were gradually demolished in the 1890s, to make way for the brick and Tudor-styled structures that now grace the school’s 250-acre campus. To this day, St. Mark’s continues to add new facilities for its students—a new athletic center, dormitory, and performing arts center all within the last two decades—but strives to couple the feel of its pre-existing buildings with the amenities recent design and architectural advances allow.

Though the means by which faculty can educate students has changed with advances in technology and such, St. Mark’s still looks to its longtime Latin motto as an inspiration for that mission. Age Quod Agis roughly translates as follows for today’s batch of students: Do and be your best. It is a goal that certainly involves achievement in the classroom but extends to other aspects of life at an independent school. St. Markers are challenged on multiple fronts—in the academic arena, on the athletic field, and as they find their place in the small on-campus community. They are challenged, yet also supported.

The scale on which this mission is carried out is much grander today than it was in the school’s first academic year. Upon its opening, one faculty member and a dozen boys called St. Mark’s home. Now the school employs more than 60 faculty members and welcomes more than 330 students each fall—and, of course, these days, St. Mark’s is no longer solely a boys school. In the 1970s, St. Mark’s reached an agreement for coordinated education with the nearby Southborough School, a newly founded institution for girls; four years later, Southborough School would merge with St. Mark’s, establishing the latter as a coeducational facility and thus enriching its community.

Another change in regard to student make-up since those early days regards the inclusion of day students. Although the vast majority of St. Markers still live on campus, many commute to school six days a week from Southborough and nearby communities. These day students—about 20 percent of the student population—are welcome at all school events and only help to create a greater diversity on campus.

Accredited by the New England Association of Schools and Colleges, St. Mark’s School—now more than 150 years old—continues to serve young learners from throughout the world. Yet it maintains a solid link to the school Burnett founded—St. Mark’s is still very much a family-based environment. 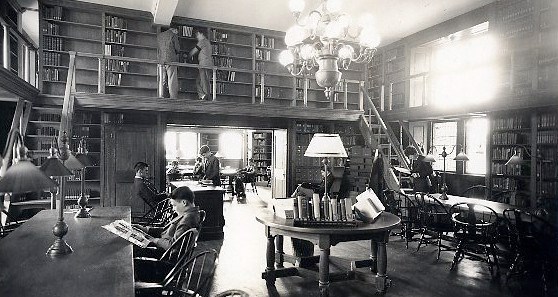