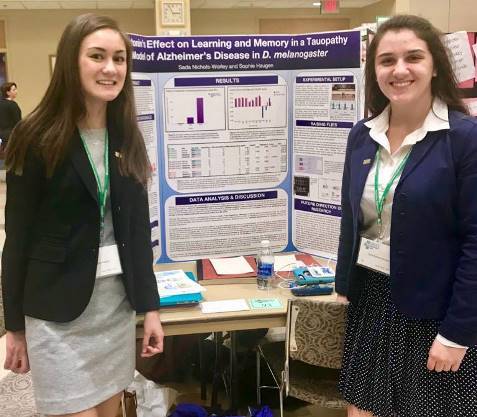 Five St. Mark's students earned honors at the 2018 Massachusetts State Science and Engineering Fair over the weekend of May 4 and 5 on the campus of the Massachusetts Institute of Technology. Two of them—VI Formers Sophie Haugen and Sada Nichols-Worley, advanced to the International Science Fair for their outstanding achievement.

A 3rd Level Award of $125 and the Pearson Book Award went to Mo Liu '18. A boarding student from Beijing, China, Mo's project was entitled "Crops on Mars: Germination of Vigna radiata and Zea mays at Low Pressure."

A 2nd Level Award and the Cabot Corporation Science & Technology Award of $125 went to Will Allen '18. A boarder from Southborough, MA, Will presented on "Dietary Effects on Immunosuppressant Cytokines in Drosophila melanogaster."

A prestigious 1st Level Award along with the Lincoln Lab @ MIT Award (a $500 prize) was presented to V Former Jiwon Choi, a boarding student from Seoul, South Korea, for her project titled "Bio-ink: Investigating the Mechanical Potential of Protein for 3D Bioprinting."

A special 1st Level Award of $500 from the Mass Medical Society along with a UMass Medical Center award of $500 went to Sada Nichols-Worley and Sophie Haugen, both VI Form day students from Southborough, for their project entitled "Melatonin's Effect on Learning and Memory in a Tauopathy Model of Alzheimer's Disease in Drosophila melanogaster." These two St. Markers are advancing on to the 2018 Intel International Science and Engineering Fair in Pittsburgh, PA, in mid-May.

Congratulations to all of these talented St. Mark's scientists!