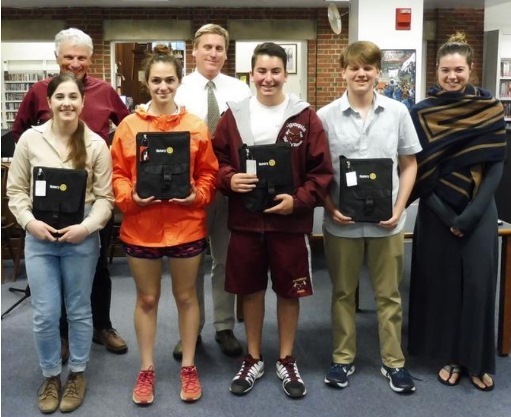 This spring, Paige LaMalva '20, a rising V Former from Southborough, was recipient of a Rotary Youth Leadership Award (RYLA), sponsored by the Southborough Rotary Club. With this award, LaMalva was able to participate in a three-day leadership retreat at Fitchburg State University in June, along with as many as 200 other young people from across the region.

LaMalva is pictured here, standing at left, receiving her award. In the back row, center, stands SM Dean of Students David Vachris and at far right is SM alumna and new faculty member Emily Michelson '13. Both are members of the Southborough Rotary Club.

Below, in her own words, Paige shares her account of her RYLA experience this summer.

As I was watching a St. Mark's baseball game this past season, Mr. Vachris took me aside. At first, I thought I was in trouble, but he assured me that I was not. All of a sudden, he started talking about an opportunity called RYLA (Rotary Youth Leadership Awards). I did not have much familiarity with it, but as he started talking about it, I knew that it was an opportunity that I wanted to take part in.

RYLA is a vigorous leadership opportunity over a course of time, ranging from a day to a week. Students that are entering their junior year have the chance to participate in leadership activities that will help develop skills to being a strong leader. At the same time, students are also building new relationships with other kids around them. Many community leaders, speakers, and guides join in the conference to discuss topics during our activities, such as problem-solving skills, public speaking workshops, and other ways to become a bold leader. Each Rotary Club sponsors a few students from that specific club, and I was the only St. Mark's representative from Southborough.

Once I got accepted to the three-day retreat, I was overjoyed. The next two months, I was patiently waiting for the opportunity to partake in all of the activities I had read about on their website. I was fortunate enough to have one of my closest friends from Southborough, Meredith, along with two boys named Joe, who would be members from the Southborough Rotary Club.

I patiently waited for the day of June 22 to roll around. Each time I would receive an email or information in the mail from RYLA, I felt even more eager to attend. As June 22 arose, and Meredith and I had entered through the welcoming doors, we were immediately greeted by people called group facilitators. They were all greeting us with a smile and pointing us to the required check-in areas.

After a little time had passed, and we found ourselves on one of Fitchburg State's quads with about 200 other Rylans. This is where I met the other Northborough Rylans and saw other familiar faces of people I recognized from neighboring towns. Before I knew it, I was separated from all of the kids I knew and put into Group V. The kids I met were from all different towns in Massachusetts, and their names were Paige (yes, we had the same AND same middle name), Apple (who was actually from the neighboring town of Northborough), Liam, Thomas, Gabe, and our group facilitator (or GF) was named Karissa. Our group immediately got along; we were all different kids, but we seemed to make it work. Karissa continuously told us that we collaborated so well together, and we were Group V, the Very Best Group. This was evident during our first task; each group was given a ton of newspaper, string, and tape and challenged to build a structure with those items that would support a paint bucket. Our group executed this task on our first try and at least five minutes faster than all of the other groups.

One of the most eye-opening activities we took part in was the Culture Walk.Similar to how St. Mark's does it, students could voluntarily walk to the front of the room based upon if they identify themselves belonging to a particular group. Unlike St. Mark's, each group is then asked a variety of questions, revolving around how it feels to be a member of that group and if there are any stigmas associated with being a person of that particular group. Many questions were personal; they were not a lot about culture, but they were based upon emotions, feelings, and social class. From this exercise, I learned, as a leader, how vital it is to not judge a person by its cover because some people don't know what others are suffering through.

My other favorite exercise we participated in was the Reality Fair. Each student was given a random job, and there were tables set up around the room where sat the advisors who helped pay for our insurance, food, and housing. The goal was to not go bankrupt by the end. It was very difficult to stay under budget, and a lot of kids didn't. In this scenario, I was assigned as a flight attendant, but I forced to live with three other people, quit school, and I had $2.00 left because I didn't make enough money for a lavish lifestyle. This activity made me a better leader because I learned that I needed to be aware of everyone's strengths and weakness, especially if they come from different economic backgrounds.

Overall, my experience at RYLA was unforgettable, and I learned many life lessons from it, both as a leader and a human being. I plan to keep the friendships I made with the amazing people I met. My biggest takeaways from RYLA are effective ways to be a leader for the Southborough and St. Mark's community. 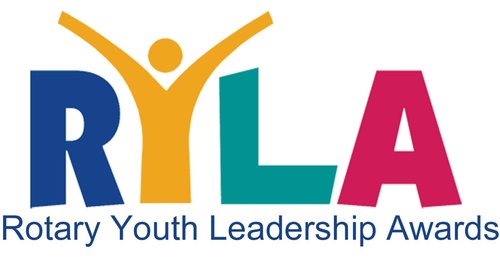