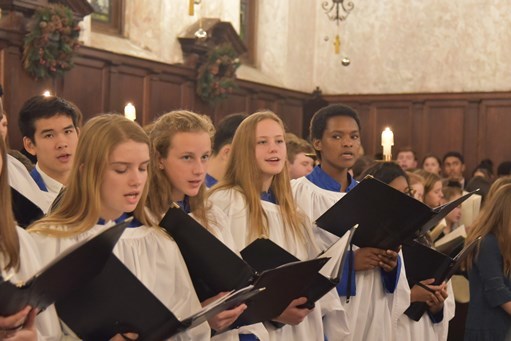 This past week, St. Mark's held its annual Service of Lessons and Carols on Thursday evening, December 6, and again on Sunday afternoon, December 9. The service is considered a traditional Christmas event at many (if not all) Episcopal boarding schools, as well as numerous colleges and churches around the world.

The service was introduced at St. Mark's during the tenure of music teacher J. Stanley Sheppard (at SM from 1942-1976), but came into its own under Tom Berryman, director of music from 1983-2013.

The format of the "Festival of Nine Lessons and Carols" (as it is formally known) is fairly standardized. The Nine Lessons, which are the same every year, are read by representatives of various constituencies at the School. The singing is divided into "carols" which are sung by the Choir and "hymns" sung by the Choir and congregation. The carols vary from year to year, although some music is repeated.

Traditionally St. Mark's has presented the Service of Lessons & Carols in its own Belmont Chapel, usually twice, in order to accommodate audience demand. In 2015 there was a single service, at Trinity Church, Copley Square, Boston, to celebrate the School's 150th year. Since then, the service has returned to Belmont Chapel, again on two different dates each year. The first for the School community (students and faculty) and the second open to the public.

Once again this year, the St. Mark's School Choir, under the leadership of Mr. James Wallace, Director of Music and Art Department Chair at the School, presented a beautiful series of festive carols. These included "Night" (with text by Jaroslav J. Vajda and music by Carl Schalk), "Ding! Dong! Merrily on High" (a 16th century French tune set to words by G.R. Woodward), "Carol of the Bells" (a traditional Ukranian Carol), "The Angel Gabriel" (a traditional Basque Carol), "Song of Mary" (a 20 th- century anthem by Leonard Young and Harold Friedell) and the 16th century traditional Spanish Carol "Riu Chiu."

Hymns sung together by both Choir and congregation were "O Come, All Ye Faithful," "O Come, O Come Emmanuel," "Personet Hodie," "O Little Town of Bethlehem," and "Hark! The Herald Angels Sing." Interestingly, the words to "O Little Town of Bethlehem" were written by Phillips Brooks (1835-1893), longtime rector of Trinity Church in Boston and later Bishop of Massachusetts. Brooks also served as president of the St. Mark's Board of Trustees until his death, and he consecrated and dedicated Belmont Chapel at St. Mark's when it first opened in 1890.

For a video of the Thursday evening service, click here.

The entire School community filled the Chapel for the Thursday evening service, while more than 150 guests—alumni, faculty, families, and friends— attended on Sunday. That service was followed by a reception in the Hinkle Room. What a wonderful tradition celebrating the spirit of the season at St. Mark's!