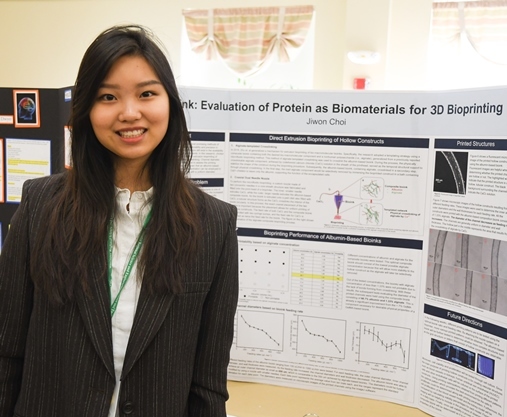 Jiwon Choi, a VI Former from Seoul, South Korea, won the 2019 Worcester Regional Engineering & Science Fair (WRESF) at Worcester Polytechnic Institute (WPI) this month. In addition, five other St. Markers—all part of the Taft STEM Fellowship program at St. Mark's— earned honors at the WRESF, including two more finishing in the top ten out of 130 entrants.

Choi's project— Bio-Ink: Evaluation of Protein as Biomaterials for 3D Printing—edged out an entry from Worcester's Mass Academy of Math & Science for the top spot in the First Level. Haley Dion, a VUI Former from Medway, Mass., Kerrie Verbeek, a VI Former from Southborough, and Megan Christy, a VI Former from Southborough each earned Second Level awards, coming in sixth, tenth, and thirteenth respectively. Dion's project was entitled The Regulatory Impact of ApoE on IGF1 Signalling Alzheimer's Disease. Verbeek studied the Effects of Exercise on Aggression in a SigA Model of Schizophrenia, while Christy focused on Electrospun Polymer Materials for Endothelialization on Stent Graph.

Faith Jennings, a VI Former from Ghent, NY, took home a Third Level prize with her analysis of The Effects of Heat Stress on Telomere Length in C.elegans. Grant Gattuso, a VI Former from Southborough, received Fourth Level recognition for his exploration of Ketogenic Diet in a Drosophila Model of Parkinson's Disease.

Congratulations to all these talented St. Mark's scholars for their outstanding achievements. "All in all, it was a wonderful day for all of the Fellows, including those who did not place," said SM Science Department chair Lindsey Lohwater. "We have a lot to be proud of in these students!"

As the first place winner, Jiwon Choi '19 will take her project to the Intel International Science & Engineering Fair in Phoenix, Arizona this coming May.

"This is fantastic news!" declared SM Dean of Academics Nat Waters. "I'm so proud of all the St. Markers who went to share their research, and know that judges and attendees must have recognized what we do already -- that there is a lot of great STEM thinking going on at St. Mark's. This is news to shout from the rooftops indeed! Congratulations to all, and looking forward to hearing more from Jiwon as she "moves forward to Phoenix!"