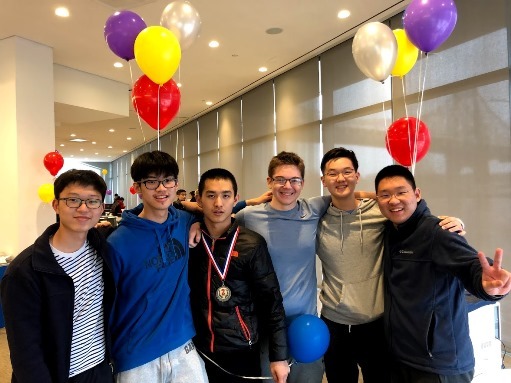 On Friday, April 5, six St. Mark's students (two three-person teams) accompanied science teacher Christopher Roche to New York City, where they participated in the Cornell University High School Computer Programming Competition. In a field of 66 teams from all over the Northeast, one St. Mark's team came in second place, while the other finished sixth.

The competition took place at two separate sites: one on the
Cornell campus in Ithaca, New York, and the other at Cornell Tech, a graduate research center located on New York City's Roosevelt Island. The St. Mark's contingent was at the latter venue.

One team opted to program in C++ and the other in Java. The contest lasted two-and-a-half hours and followed ACM (Association for Computer Machinery) rules (answering up to nine questions, in the fastest time).

St. Mark's Team CCPlus—consisting of Jason Chen '20, Ryan Paik '20, and Ryan Song '21—"really took the day," according to Mr. Roche. "Only one other team—from both the New York City and Ithaca sites—had a better score." So the Lions took home the silver medal.

"The students did an amazing job," declared Mr. Roche.