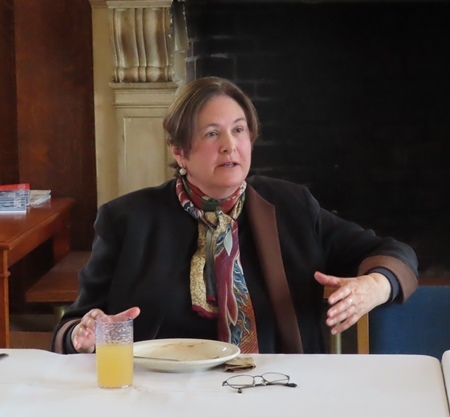 Biologist and environmental nonprofit leader Dr. Nigella Hilgarth was the April speaker for St. Mark's Gray Colloquium series. On Thursday, April 11, she addressed the entire School community from the stage of the Putnam Family Arts Center's Class of 1945 Hall.

Born in Ireland, Dr. Hilgarth received her bachelor's degree in Zoology from Oxford University in the U.K. as well as her Ph.D. in evolutionary biology. She has conducted research on behavioral ecology and evolution in birds in many parts of the world including the United States, Britain, India, Thailand, the Arctic, and South America.

Recently, as president and chief executive officer of the New England Aquarium, Dr. Hilgarth raised the profile of the aquarium's global conservation and research work by founding the Anderson Cabot Center for Ocean Life, as well as developing a vision for the future of the aquarium and surrounding Boston waterfront.

Previously, Dr. Hilgarth was executived of the Birch Aquarium at UC San Diego: the outreach arm of Scripps Institution of Oceanography. Prior to her work at the Birch Aquarium, she served as executive director of the Tracy Aviary in Salt Lake City, the largest bird park in the country, where she collaborated on research programs on penguins in South America as well as conservation efforts for marine birds in the Galapagos, Peru, and Argentina.

A skilled nature photographer as well, Dr. Hilgarth's work has been on exhibit in Taft Hall.

Before her presentation, Dr. Hilgarth had lunch with interested students and faculty. She asked each of the 16 people at the table to share their interest in environmental issues. It was a lively and informative discussion.

St. Marker Paige LaMalva '20 introduced Dr. Hilgarth and her presentation, entitled "Creating Environmental Change Without Too Much Armor." Dr. Hilgarth shared her experiences in a variety of environmental roles. She particularly emphasized the increasing dangers of climate change and urged her listeners to get involved and make a difference.

The C. Boyden Gray Colloquium Series is designed to engage St. Mark's students in an exploration of one complex global issue annually. Students hear from outside speakers with varying viewpoints, participate in small group discussions, write about and debate the issue, and take part in all-community events. C. Boyden Gray '60, former board president and current Trustee Emeritus, has committed $1.5 million to fund this annual yearlong learning exercise. St. Markers, Gray believes, "should think in big terms and be inquisitive about the outside world." Gray, a former U.S. Ambassador to the European Union, White House counsel to the first President Bush, and recipient of the Presidential Citizens Medal, hopes that tackling these topics in an intensive fashion will inspire students to serve their country and the world. This year's Gray Colloquium theme is "Creating Change."