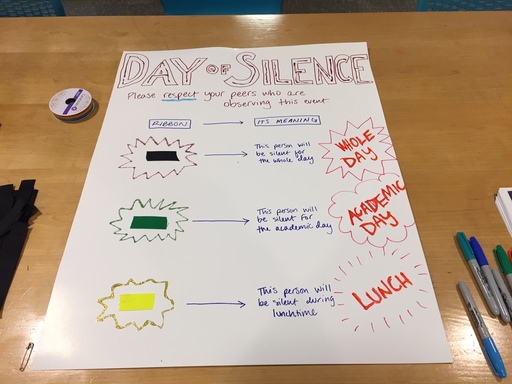 Now in its 24th year, GLSEN's Day of Silence, is a student-led national event where folks take a vow of silence to highlight the silencing and erasure of LGBTQ+ people at school. Participating members of the St. Mark's community could choose to be silent for the entire day, for just the academic day, or only during lunch. Others could choose to support the Day of Silence by wearing a rainbow ribbon. 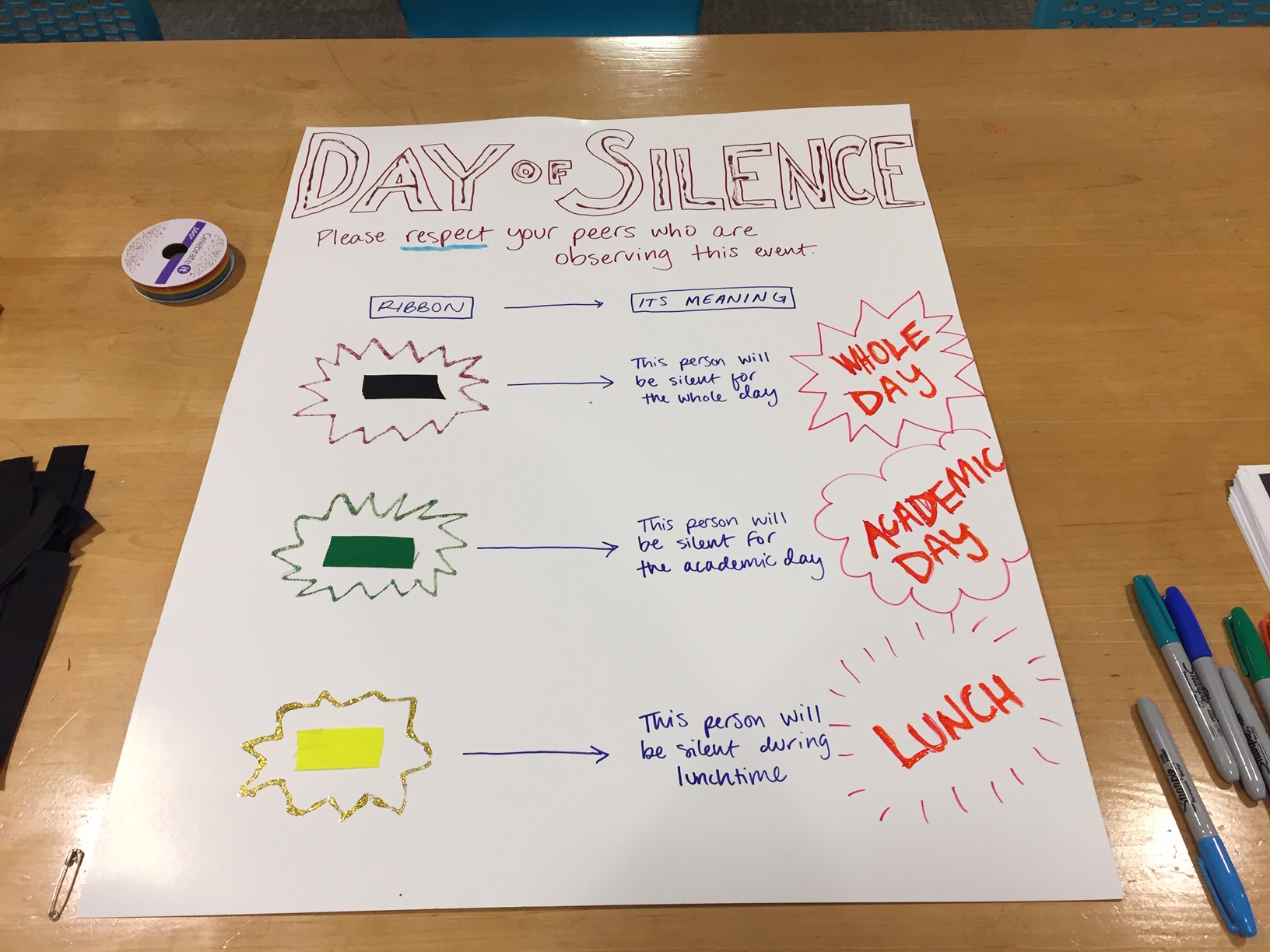 Many St. Markers took part in the 2019 Day of Silence.

"The Day of Silence is a great way for the SM community to support other members and participate in a challenge," said III Former Jocelyn Cote., a border from Bolton, Massachusetts.

"I never took part in this day until I came to the U.S.," said Ilia Rebechar, a V Former from the Ukraine. "After learning about the challenges of the LGBTQ+ culture, this day provides a way for me to tell the world about our experience. It means a lot to me, and I hope people are open-minded enough to be willing to show care, love, and support."

"I was not that involved with the LGBTQ+ community until I came to St. Mark's," relates Sierra Petties, a V Former from Fayetteville, Georgia. "I didn't feel I needed to be involved in it. But once I came here, I noticed how truly involved my life is. Almost half of my family and friends are part of the LGBTQ+ community. . . I am not completely silent for this year's Day of Silence just because of a prior commitment, but I have been the past two years. I try to stick up for all bullied people as much as I can, so no one has to go through the pain of not being accepted for who they truly are." 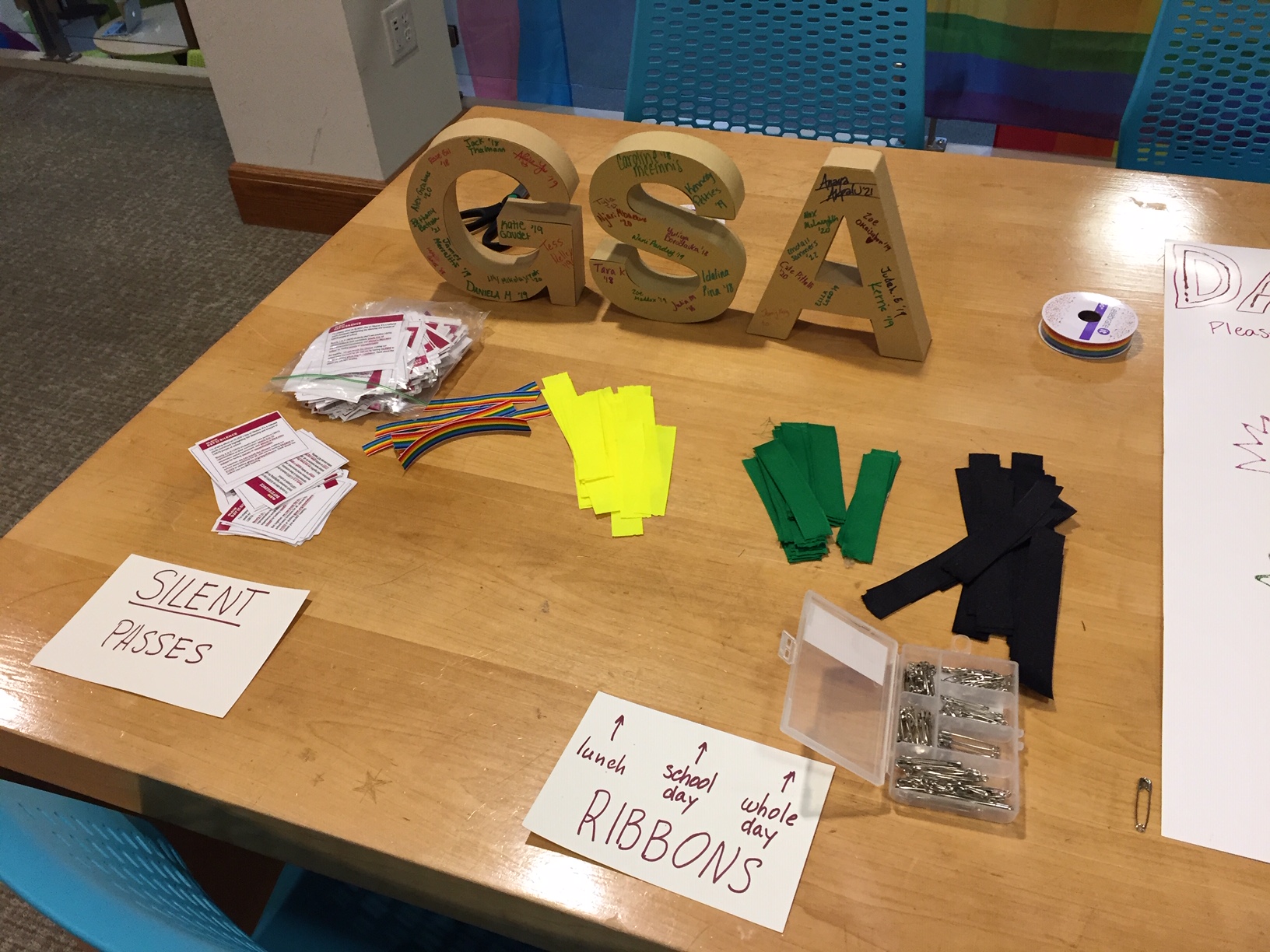 Co-Head Monitor Tom Paugh '19 is in a similar situation, and he agrees. "This Day of Silence I am unable to be silent due to logistics. However, as an ally to the LGBTQ+ community, I have a duty to support others who are observing this important day, by acknowledging the bullying and discrimination towards LGBTQ+ people that occurs in school environments. We must work to think about this and remain aware of it every day."

"Solidarity is a valid form of support that is both educative and effective," declares Truman Chamberlin, a V Former from Chapel Hill, North Carolina. "To see from another's perspective is the only way to come close to understanding their struggle. Having the Day of Silence symbolizes the hiding of identity that members of the LGBTQ+ community are often forced to do. The day is a form of solidarity that cannot and does not equate with the true LGBTQ+ struggle, but it allows the participants to begin the first steps toward resolution."

Tommy Flathers, a IV Form day student from Southborough, concurs. "I'm doing this because I'm trying to spread awareness of how people feel when they feel that they cannot express themselves," he says. "This is nothing compared to their struggles."

Some found it hard to maintain their pledged silence, but others took strength from it. One VI Form girl said that she "didn't find it hard to keep quiet, since I often have to hold my tongue. The Day of Silence is a great way to spread awareness, and I'm glad I participated."