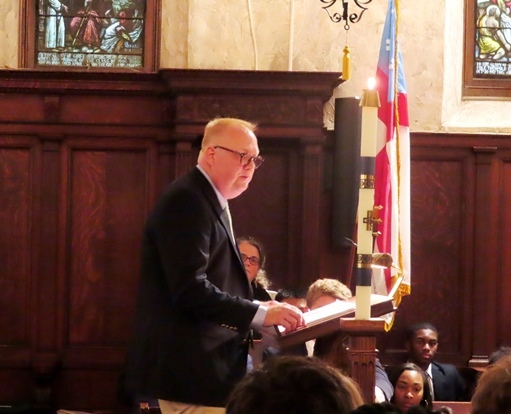 On Friday, June 7, on the eve of St. Mark's 154th Prize Day ceremony, the traditional Baccalaureate Service was held in Belmont Chapel. Jason Eslick—a longtime member of the St. Mark's English department—was this year's speaker, elected by vote of the VI Form.

The service opened with the choir performing "Age Quod Agis," and with the singing of the hymn "Praise My Soul the King of Heaven." The Rev. Barbara Talcott, Head Chaplain at St. Mark's, then welcomed the members of the Class of 2019 and their families, before turning the service over to a series of VI Formers, who read passages from scripture in a variety of languages, including Hebrew, Greek, and Latin. There were readings from the works of Ralph Waldo Emerson and Hunter S. Thompson, followed by Mr. Eslick's Baccalaureate address.

The hymn "For the Splendor of Creation" was also sung, followed by prayers in Swahili, French, German, and Spanish. The Choir, under the direction of Mr. James Wallace, Director of Music and Arts Department Chair, then sang "Baba Yetu" (the Lord's Prayer in Swahili), an anthem by choral music composer Christopher Tin. During the anthem, V Form ushers passed baskets for an offertory collection benefitting Brantwood Camp. Established in 1904, Brantwood serves each summer as a camp for inner-city and low-income youth. Since 1920, St. Mark's has been directly associated with Brantwood. A number of St. Markers volunteer as counselors every year, with some going on to work full-time as members of the Camp's Permanent Staff.

The Rev. Katie Solter St. Mark's associate chaplain led the Collect for Graduation, found in the St. Mark's Prayer Book, and Head of School John C. Warren '74 led the recitation of the School Prayer. Following the School Hymn—"Sun of My Soul"—Rev. Talcott delivered the blessing to end the service.

The Baccalaureate service is the oldest end-of-year tradition at St. Mark's.