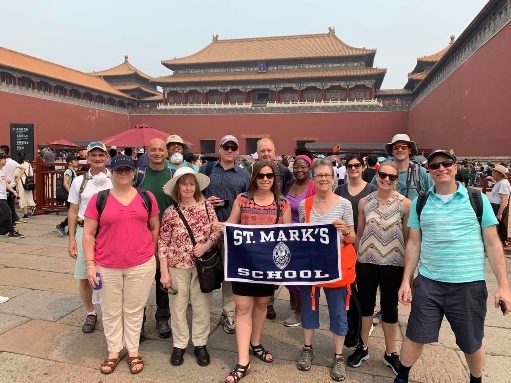 They explored history and culture of both countries. In China they practiced Tai Chi, visited the Forbidden City and the Temple of Heaven, learned how tofu is made, climbed the Great Wall, went on a treasure hunt, and enjoyed local cuisine. In Korea they participated in an arts and crafts workshop at Hanok Village, visited the Korean Demilitarized Zone (DMZ), , attended a baseball game, delighted in a "raccoon café," listened to k-pop, spent time at the Imperial Palace of the old Joseon Kingdom and at the Korean Buddhist Temple in Golgusa (home to South Korea's No. 851 National Treasure—the temple's stone carved Buddha), tested their martial arts skills in sunmudo and archery, practiced meditation, learned about the history of Hyundai, and toured a massive shipyard in Ulsan. They also discovered even more delectable food, including a number of vegan options, dakgalbi, Korean fusion cooking, and more.

They also had professional opportunities, like their visit and exchange with Dandelion School. From the blog of the St. Mark's trip: "The teachers from both sides reached across an entire world of teaching philosophies into uncharted territories in between. It was inspiring to see two groups of people of such different backgrounds united by their shared dedication to education and to their students.

There were a number of memorable moments. At the Temple of Heaven in Beijing, a crowd gathered when veteran art teacher Barb Putnam began drawing a picture of the temple. And some were powerful, as when they visited the DMZ, the uncannily pristine area above and below the 38th parallel, "where weary admirals and generals traced an arbitrary line to take a break from the bloody conflict that split the Korean Peninsula in half after three years and one month of fighting a war that began exactly 69 years ago," according to their blog. They visited several spots along the DMZ and got to peek into North Korea.

A real highlight of the teachers' visits to both China and Korea was the opportunity to spend time with St. Mark's students and St. Mark's families in their home countries.

"I have worked in admission for the last 19 years and during this time I have interviewed countless prospective students from Asia," said Elise Morgan, St. Mark's senior associate director of admission. "However, I have never had the opportunity to travel to China. Traveling in Beijing completely opened up my eyes and gave me much needed perspective on the culture, community and way of life in Beijing. It also helped me to understand just how different Beijing is from other major cities in China such as Shanghai, Tianjin and Shenzhen. I feel much better prepared to make connections with both our current St. Marker's from Asia, as well as, our prospective applicants from Asia. This was an amazing opportunity and I so grateful."

"It was such a valuable opportunity to reach out to our Korean and Chinese families and students," added St. Mark's Head Chaplain Barbra Talcott. "Being in Beijing and Seoul was fascinating, and I learned (and unlearned!) so much that I know will be useful. But perhaps my favorite experience was seeing how my colleagues absolutely 'lit up' when they walked into the receptions and saw students, alumni and families. It was so clear to me in that moment who we are and what we love: our students and their lives, hopes and dreams. And that is the main reason that we all chose to take two weeks out of our summer break to travel halfway around the world! To know them better so we can do our jobs better and make our relationships even more effective."