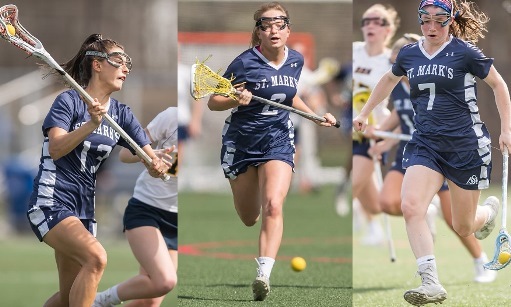 Horne and Student were both named regional All-Americans.

Bailey Horne was MVP of this year's 17-1 Independent School League (ISL) championship team, scoring 43 goals, leading the team in assists, and earning All-ISL status. At St. Mark's, she also received the Peter M. Coy Prize for "surpassing intensity and determination, exceptional conditioning and physical courage, a desire to excel regardless of injury or adversity and tenacious devotion to the success her team, exemplifying the spirit and joy of competition." Horne will play lacrosse at the University of North Carolina next year.

Sophie Student, who led the championship Lions in scoring with 61 goals and 82 points, and who set St. Mark's single season and career records in draw controls (102 in 2019, 240 on her career with a year to go), was also an All-ISL selection and was named the league's Most Valuable Player. She will be back in action for St. Mark's next year.

Shelby Howard was named an Academic All-American by US Lacrosse. A Monitor in 2018-2019, Howard also received the William T. White Prize at St. Mark's, for "having made a particular contribution to the success of the season because of her enthusiasm, determination and unselfishness." Howard plans to play soccer and lacrosse at Bates next year.