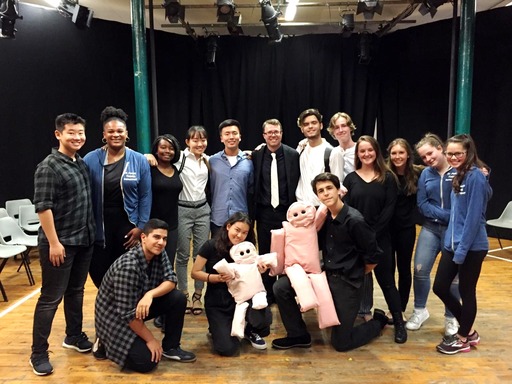 "Incredible!" declares Anu Akibu '20. "Amazing!" is how Libby Flathers '21 describes the experience. Both students are simply echoing the consensus opinion of all those involved in this summer's Theater Arts trip to the United Kingdom, where 14 St. Markers and two faculty members took part in the 72nd annual Edinburgh Fringe Festival.

The largest arts festival in the world, Edinburgh's Fringe spans more than three weeks and features some 55,000 performances of close to 4000 shows across 300-plus venues in Scotland's capital city. The St. Mark's contingent presented their production of playwright Martin McDonagh's The Pillowman as an entry in the Fringe's American High School Theater Festival-within-the-festival.

Winner of the 2004 Olivier Award and 2005 Tony Award for Best Play, The Pillowman is an unapologetic dark comedy centered on an imprisoned writer in an unnamed totalitarian state who is interrogated after the gruesome content of his short stories have begun to be acted out in real life. As disturbing as it is poignant, the play illuminates the power of storytelling and the importance of art in an ever-darkening world.

The St, Mark's group was accompanied by Mr. Kent and St. Mark's head chaplain Rev. Barbara Talcott. In addition to experiencing The Fringe Festival and exploring, Edinburgh, the St. Markers also spent time in London—where they visited the Globe Theatre—and saw more of Scotland as well.

"The trip went incredibly well," said rising V Former Felicity Keyzer-Pollard. "Not only did we have the opportunity to be a part of one of the world's most prestigious theatre festivals, we also had the opportunity to see countless amazing performances and experience Scottish culture. I have to say my favorite part was the night they corralled about 200 people across all of the different programs staying at the University of Edinburgh and held a traditional Scottish Ceilidh. It was a crazy experience dancing around for hours to the sounds of bagpipes and fiddles. I don't think I could every properly explain how tiring and fun that experience was."

"To me, the trip was incredible," said rising VI Former Anu Akibu. "Edinburgh is a beautiful city I would love to visit again (especially during the Fringe Festival). Considering the astounding actors, actresses, and tech savvy individuals chosen to be a part of the Fringe and a talented director who believed in us enough to bring the play to Scotland, I had no doubts that our school would put on an amazing performance. In the end, we received positive reviews and even got recognized on the streets, so I am incredibly grateful and honored to have been a part of the festival."

It was a serendipitous experience for Kian Sahani '20. "I had originally not planned on joining this trip until one of the cast members decided to back out," he said. "I was called upon to take on a role in the cast and join the trip, to which I accepted in a heartbeat. In the end, it was one of the best decisions I have ever made. Being my first trip with St. Mark's, I was not sure what to expect, but this trip became the highlight of my very busy summer. It was a success, and that is thanks to the faculty that made it happen (especially Mr. Kent and Rev. Talcott). We put on four amazing performances of The Pillowman. On top of that, we watched other Fringe shows until we were just sick of theatre. Probably one of the most enjoyable parts of the trip was interacting with "Baby Wants Candy": an improvised musical group that we did a workshop with. Along with that, we got the chance to interact with many other schools from all over the USA, from Maine and Texas to Alaska and Hawaii. I had never thought of myself as an actor until this trip (because now I can technically call myself world-famous), but I had also never seen the acting community as such a close one. I had always assumed that each actor would do his own thing but in reality, everyone is looking out for one another as any community should be. I feel blessed to be able to go on a trip like this and I would give anything to do it again."

Libby Flathers '21 agrees. "Our trip was so amazing. I am so thankful that I got this opportunity to perform in the biggest theater festival in the world. My favorite part was when we got to perform on the Royal Mile. It was really fun, and we got to share our play with everyone on the Mile for free."

"Theatre has always been an interest of mine since I was in the second grade," added Anu Akibu. "This festival just supplemented that appeal. My favorite part of it all were the shows we watched (which all happened to be wonderful performances). We chose to see a mixture of other American High School shows, each with their own passionate and peculiar performances. With styles ranging from physical theatre to musicals to puppetry, I was always excited for the next show we were booked to see. In addition to that, I am also glad we were able to see more of Scotland than just the festival. For example, attending the Royal Military Tattoo which was a spectacular musical performance by the military of various countries, and having a chance to learn some traditional Scottish dances."

The trip provided an important perspective on specific aspects of theatrical production for Stage Manager Keyzer-Pollard. "I got to experience a new sound and light system, learn from professionals who are incredibly talented in what they do, and be a part of telling a story as amazing as The Pillowman," she said. "This experience really has pushed the boundaries of how I view theatre. It is so much more than just the plays we perform at St Mark's. It is anything and everything you could possibly imagine. At the festival we got to see shows that included musical improv, stand-up philosophy, sensory deprivation, interpretive dancing, and even a show inside a storage container. I am so incredibly thankful for the opportunity we were offered and the amazing group of people I got to share it with."