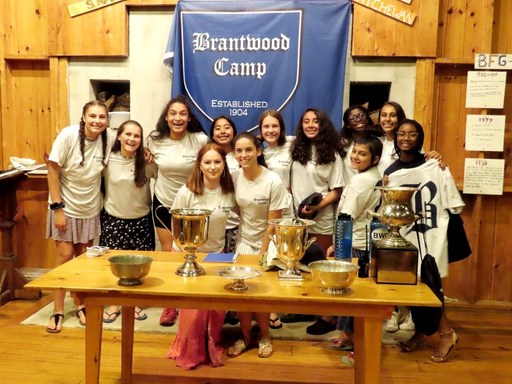 For 99 summers, students from St. Mark's School have volunteered at Brantwood Camp in Peterborough, New Hampshire, working primarily with low-income youth. St. Mark's alumni and faculty are also involved with the camp in a variety of ways: as staff, trustees, supporters, and advocates to the greater community.

Brantwood is a summer program for boys and girls, enrolling campers between the ages of 11 and 15, mostly from Massachusetts, New York, New Jersey, Connecticut, and New Hampshire, who might not otherwise have an opportunity to attend summer camp. 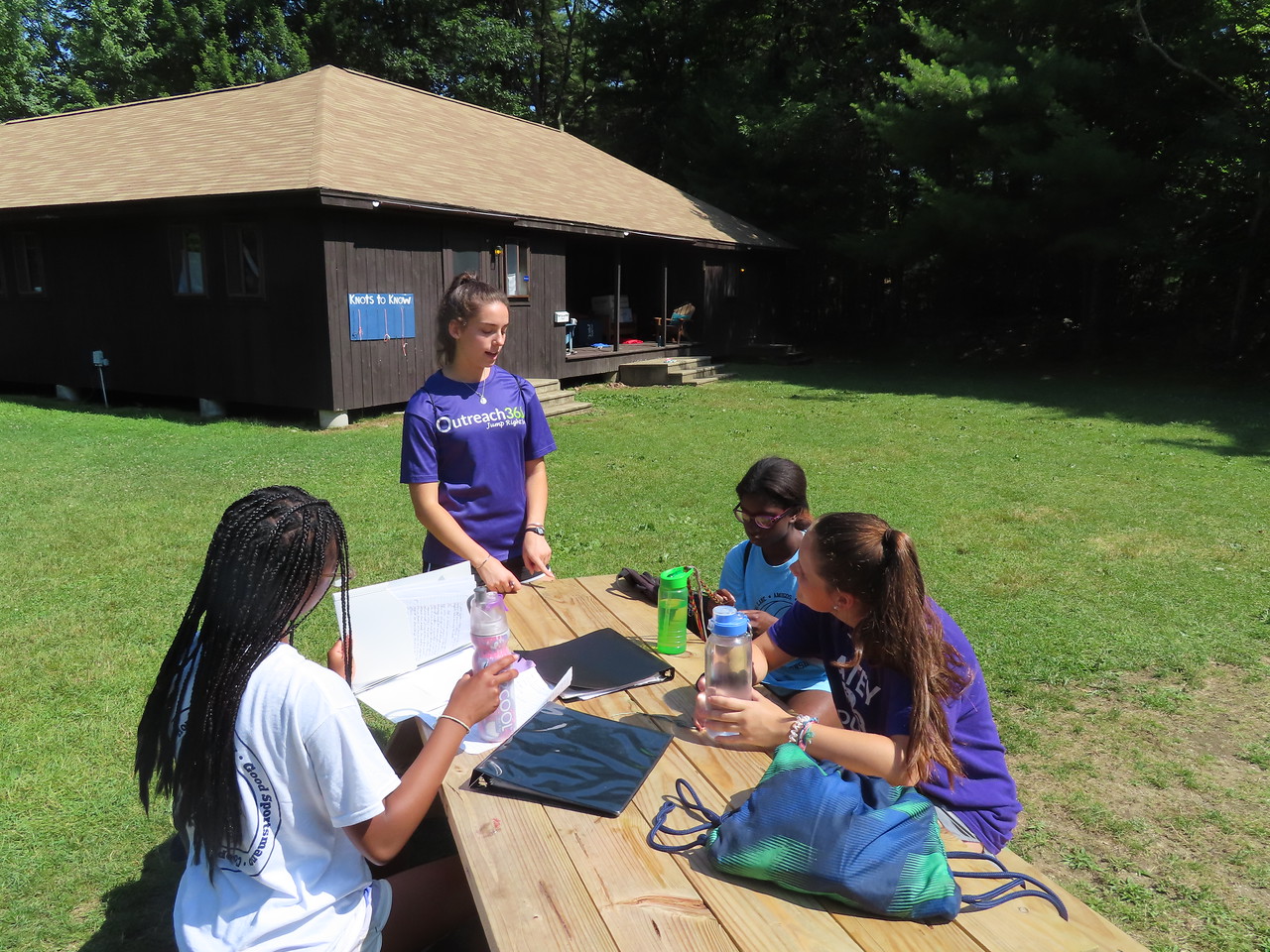 "The best part of my Brantwood experience was watching the campers grow and mature during their time at camp," said Catherine Pellini '20. A day student from Shrewsbury, Mass.,, Pellini volunteered at Brantwood for the second consecutive summer in 2019.

"I watched many campers make friends, take on responsibilities, and become exponentially more confident during the two weeks that I was there," she said. "It was remarkable how different many of them were the second year that I volunteered." At Prize Day last June, Pellini was awarded the Brantwood Prize, as that St. Marker who had "done the most for Brantwood." Other St. Markers volunteering at Brantwood this summer were Sarah Winters '21, Nathaniel King '20 (also for his second consecutive year), Reily Scott '21, Jeremiah Ojeah '21, Preston Dotson '21, and Mateo Macri '21.

"I really enjoyed the people that I worked with at Brantwood," said Scott, a V Form boarder from Concord, Mass. "They came from a wide spectrum of backgrounds. I also appreciated the general mood of Brantwood. Everybody was a distinct individual—their own person—and they weren't hesitant to positively critique my approaches to certain situations, which I appreciated." 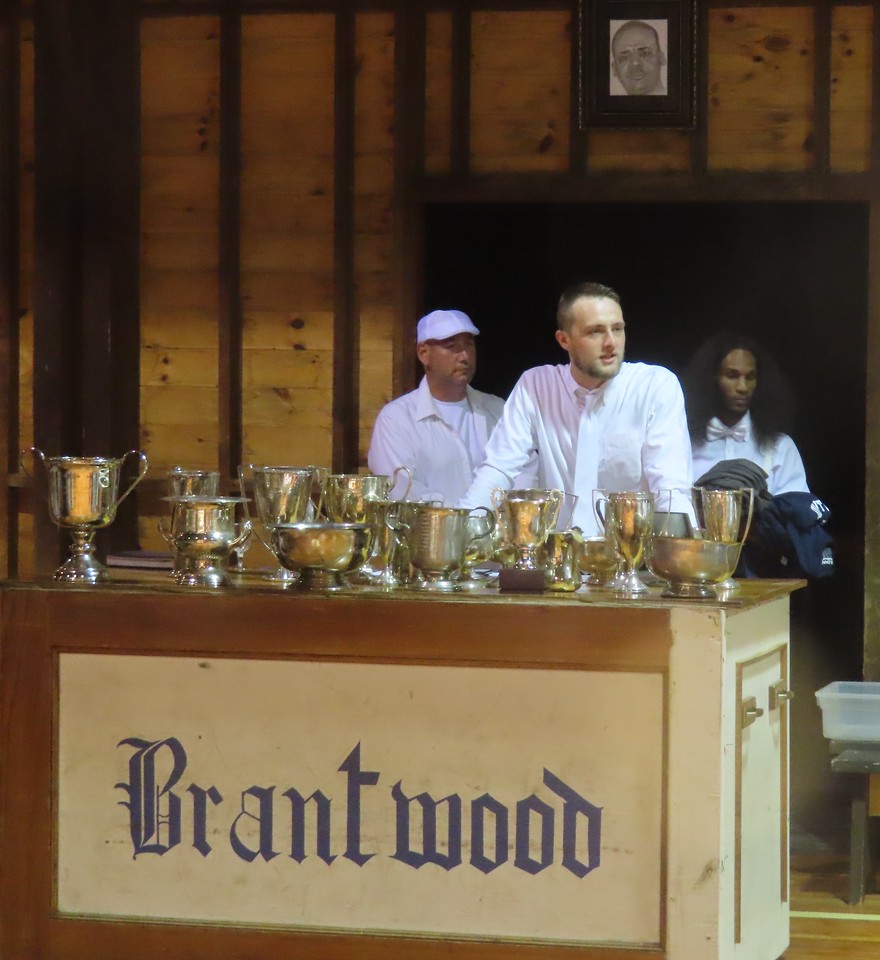 In 2019, Max Hinkley '15 returned to Brantwood for a seventh consecutive year, working this summer as a permanent counselor at the boys' camp. He is the first St. Marker in almost 40 years to work at Brantwood for at least six summers. In 2019, Mr. Hinkley was a member of the senior staff at the boys' camp, serving as director of the Leadership in Training program.

Providing leadership education and opportunities for both older campers and counselors is a principal focus of the Brantwood Camp. "Before volunteering at Brantwood, I never thought of myself as a leader," said Pellini. "I was often a person who led by example, but I was never very outgoing or vocal. However, after having the opportunity to be a leader that the campers looked up to and who was tasked with a lot of responsibility, I was able to gain the confidence to become a more vocal and assertive leader."

"I found that the most challenging part was getting the kids to focus and cooperate," said Scott. "I learned that when someone is acting out for no apparent reason, there is always a reason. That helped me become a better leader."

These observations are echoed by three other current St. Markers who served as Brantwood volunteers in previous summers. "The best part of my Brantwood experience was learning how to take care of the kids," recalled Samantha Leslie '20, a day student from Sudbury, Mass. "I had never had that level of responsibility before, so it was a new and exciting experience when the kids called me by my last name. I also learned to be patient when dealing with kids. It was a great experience."

Will Osborne '20, a boarder from New York City, recalls the challenge of getting campers to work together. "Like most cabins, my cabin was made up of boys from vastly different backgrounds, varying from other small towns nearby to large cities such as New York City and Boston," he said. "Because I was working with younger campers, most of them took time to adjust to the rules and customs of camp, especially living with so many other boys. At first the boys had difficulty working as a team, both in sports and other cabin activities. I tried different ways to encourage them." Eventually, he was able to tap into their desire to succeed in the competitive aspects of the program. "That outweighed their desire for individual glory, leading to them growing together and working as a team."

"I learned the importance of putting others first and contributing to something larger than myself," said Alie Hyland '20, a day student from Shrewsbury, Mass. "Making this a memorable experience for the campers was my top priority, and being able to achieve this was the most rewarding feeling of my Brantwood experience. Brantwood taught me that there is more to gain by serving others instead of focusing on myself." 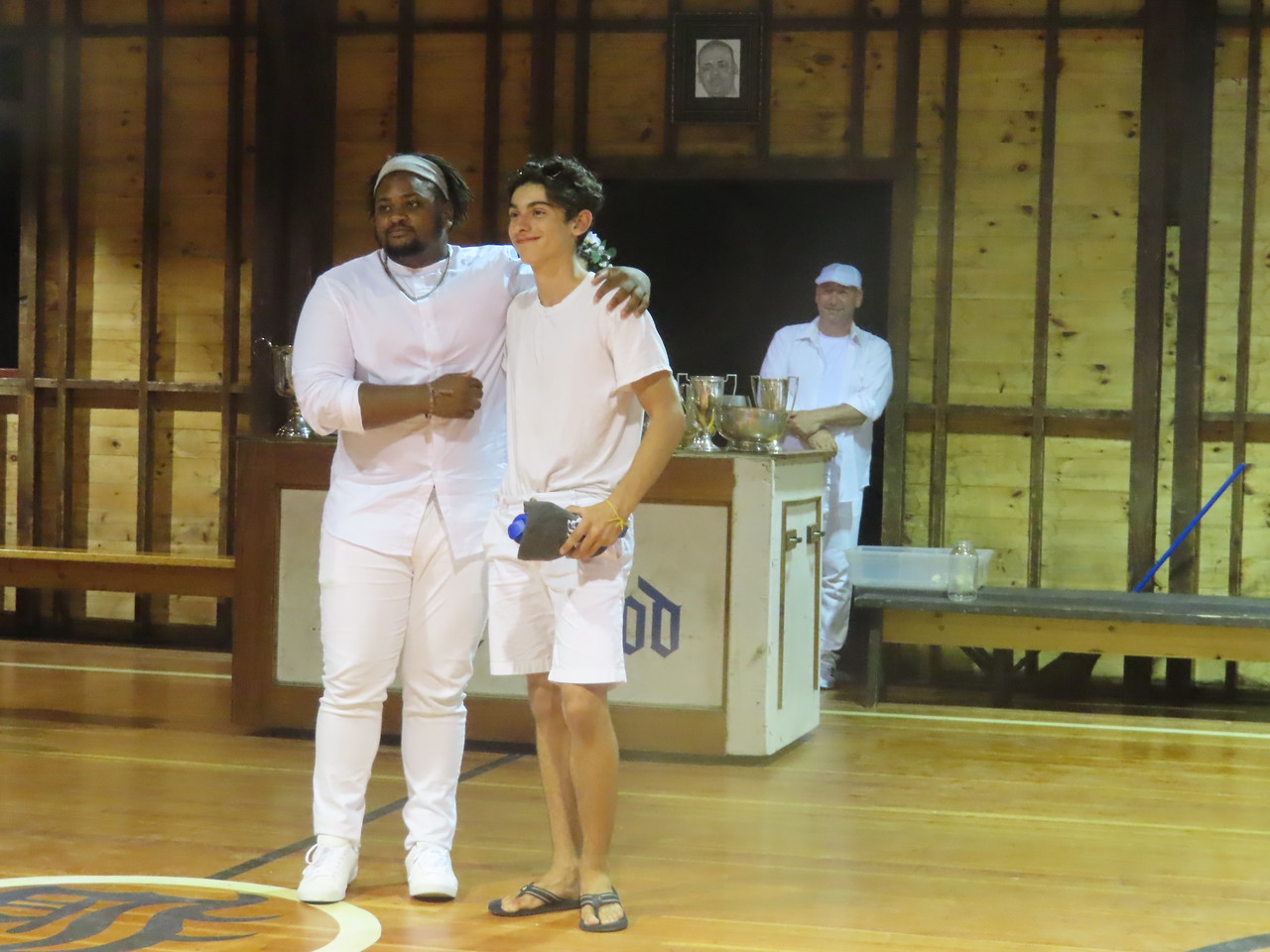 Brantwood campers engage in athletic competition; work on achievement challenges involving first aid, swimming, and other aspects of camp life; and prepare their cabins—called "shacks" in the Brantwood tradition—for daily inspection. Spirit and collaborative teamwork are important parts of the overall experience, and campers are active on ropes course elements, hikes, visits to Silver Lake in Nelson, N.H., and enthusiastic singing at campfire gatherings each evening. The five Brantwood Ideals—Honesty, Loyalty, Cooperation, Good Sportsmanship, and Unselfishness—are emphasized throughout.

Currently, St. Mark's Head of School John C. Warren '74, Chaplain Barbara Talcott, and Communications Manager Nick Noble '76 serve on the Brantwood Board, while former Senior Master Henry Large is an associate trustee of the camp. Mr. Noble is also a former Brantwood counselor and director, as well as the camp historian, having written two books about Brantwood.

Brantwood was founded in 1904 as a summer retreat for boys sponsored by various Episcopal parishes in Massachusetts. Lacking manpower to staff its programs during the First World War, Brantwood was closed. In 1920, Brantwood reopened under the auspices of St. Mark's School, as a memorial to William H. Cheney, St. Mark's Class of 1916, who was killed in the war. Cheney's mother, Mrs. Mary Lyon Cheney Schofield, had been chair of the original Brantwood Board at the time of its closing. 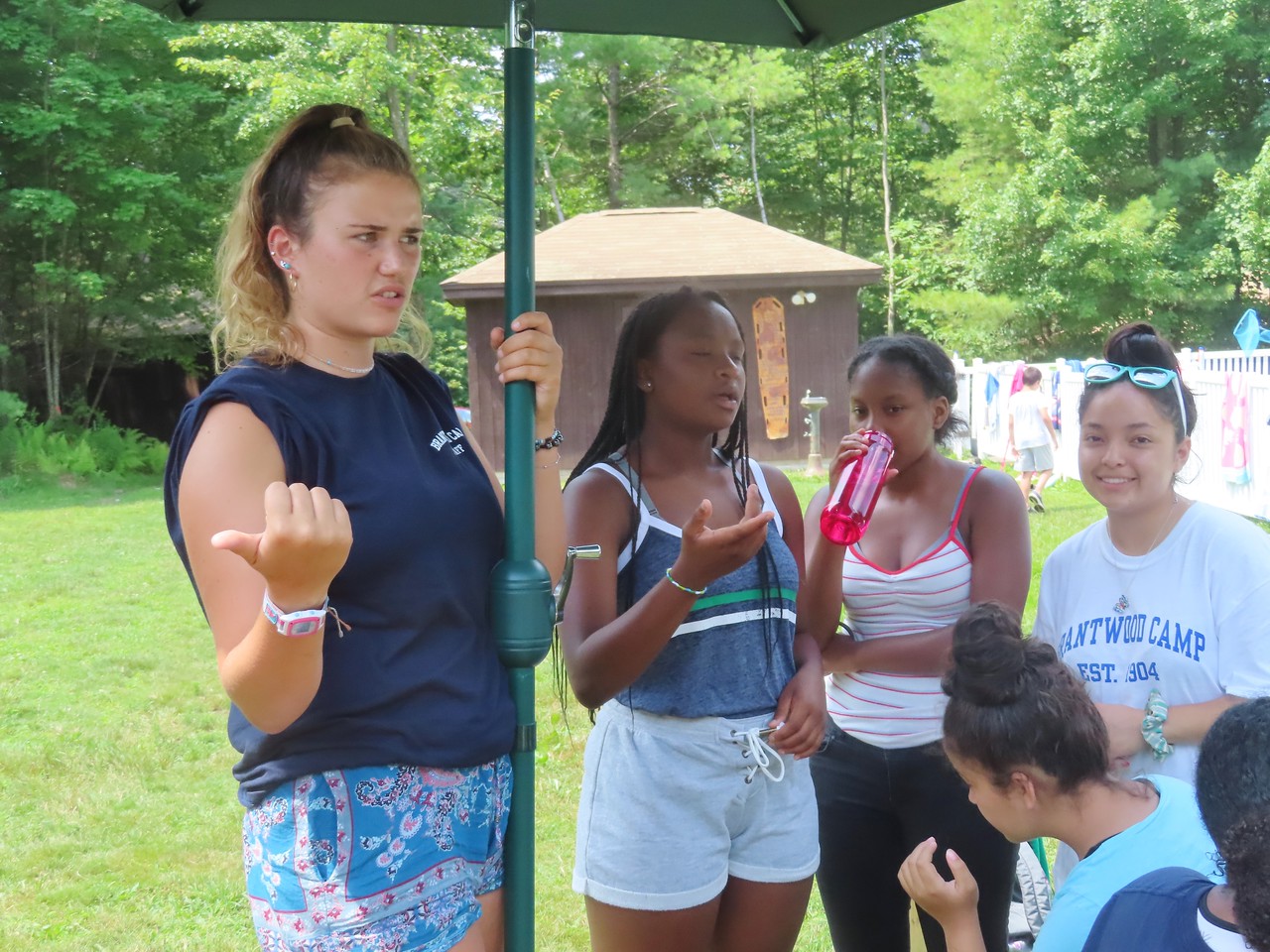 Since 1920, more than 1,000 St. Markers have spent time at Brantwood as volunteer counselors. Many St. Markers went on to become members of the permanent staff, while more than two dozen have served as director, associate director, or assistant director over the years.

In 1982, Brantwood started a program for girls, and today both Brantwood for Boys and Brantwood for Girls are thriving successfully, exemplifying the spirit of service to others that has been the hallmark of St. Mark's School over 150 years.

Each spring, Brantwood is the site for the weeklong III Form Lion Term experience. Students hike, keep journals, learn campcraft, work at various projects and tasks, and get to know each other even better as classmates.

Samantha Leslie describes Brantwood as "a unique place where various worlds collide for a two week period. Everyone gets super close mostly because of the crazy shared experiences that happen there, but I am so glad I had the opportunity to go, and it is something I will never forget."