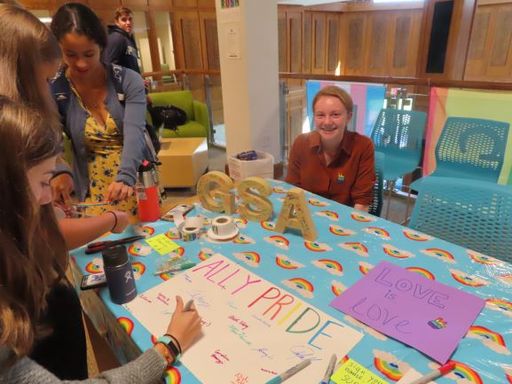 From September 23 through 27, St. Mark's is taking part in Ally Week, hosted by the School's Gender & Sexuality Alliance (GSA). The GSA is one of the student-directed Pathways affinity groups at St. Mark's, part of the SM Community and Equity program.

Ally Week is a national youth-led effort encouraging students to be allies with the LGBTQ+ members of their community in standing against bullying, harassment, and name-calling. During Ally Week, LGBTQ+ students and educators lead conversations on what they might need from their allies in school.

On Wednesday, members of the St. Mark's GSA presented a history of Ally Week at the all-school meeting. On Thursday, students, faculty, and staff signed posters and worestickers declaring themselves as allies in support of Ally Week. On Friday, the GSA held an open workshop on LGBTQ+ terminology. And on Friday, the GSA hosted a movie night.

Kendall Sommers '22, Anni Zhang '21, and Illia Rebechar '20 are the student leaders of SM GSA. "Ally week is an opportunity for the LGBTQ+ community and allies to come together to promote awareness regarding LGBTQ+ rights," says Zhang. "The week is dedicated to celebrate the courage and understanding that each ally offers for the community."

Sommers agrees. "Ally Week is so beneficial to be celebrated because it sheds light on the difficulties of being an ally and the dedication of so many people," she says. "At St. Marks I think this especially important because so many students participating in the ally-ship aspect of GSA and are extremely supportive, understanding, and accepting of this community and it is so important to show gratitude towards these people. Also, Ally Week gives an amazing opportunity to teach the importance of ally-ship and give examples on how to become a better ally to all people, not just those in the LGBTQIA+ community."

Ally Week was first created in 2005 by youth members of the Gay Lesbian & Straight Education Network (GLSEN) National JumpStart Student Leadership Team. The goal of Ally Week is to diminish stereotypes and exclusion while highlighting that peer support for LGBTQ+ students is stronger than the students themselves may have thought existed. Allies are identified as supporters but not necessarily members of a marginalized group.

Coming up, October will be LGBT History Month.