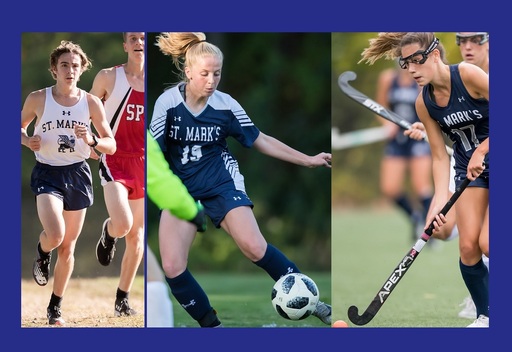 St. Mark's cross country, field hockey, and girls' soccer programs all are looking strong at the halfway point of the 2019 fall season. 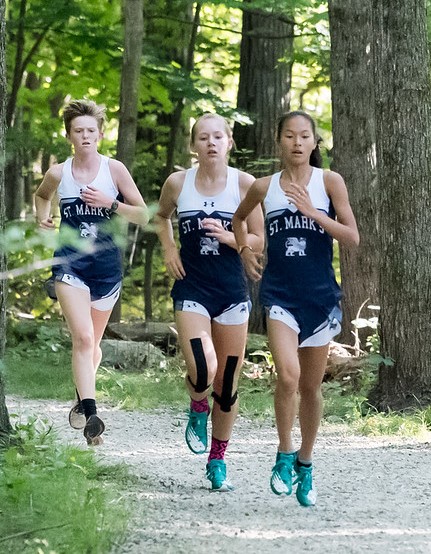 Overall, the four St. Mark's cross country teams are 28-10 overall. The boys' varsity is 8-2, 7-1 in Independent School League competition. Their one league loss was to Middlesex. Led by the running of Josh Bergers '22, Blake Gattuso '20, and Aditya Mynampaty '20, coach David Lyons' harriers still have to face strong competition from Roxbury Latin and Groton among the six regular season opponents remaining. Those two are also vying for the ISL title, along with St. Mark's and Middlesex. Girls' varsity cross country is closing in on a .500 record near mid-season. Judy Xie '23, Natalie Zaterka '22, and Nashua Poreda '22 give coach Karen Bryant's Lions a strong top three, ably abetted by the talents of Lindsay Davis '21, Kendall Sommers '22, Eve Elkins '21, and Marianne Lyons '22.

The record for this year's St. Mark's varsity field hockey team, coached by Colleen Finnerty '11, now stands at 8-1. The Lions are unbeaten in the Independent School League at 6-0. Led by captains Phoebe MacLeod '20 (All-ISL Honorable Mention in 2018) and Charlotte Galusza '20, the team features a talented blend of returning veterans, including Lauren Tolve '22 (all-ISL last year), Lydia Rascher '20 (all-NEPSCAC HM in goal for 2018), Erin Murray '21 (most improved last fall), and Helen Huang '20—with exciting young talent (five IV Formers and two III Formers). With eight games to go on their regular season schedule, they still must face ISL powerhouses Milton, Governors, Tabor, and Rivers: all vying with St. Mark's for the league championship. St. Mark's advantage is its defense, which has three shutouts to date and has allowed just 1.22 goals per game. JV field hockey also has three shutouts and has an even better goals-against-average of 1.17 per game. And with JV field hockey currently posting a winning mark of 3-2-1, the St. Mark's field hockey program overall is now 11-3-1 with half of its season complete.

The girls' soccer program currently stands at 11-5-3 overall. Coach Lauren Ames' varsity is looking strong at 6-2-2 with nine games left to play. They too have a powerful defense, giving up just 1.1 goals per game. The team features a large contingent of VI Formers, including captain Izzy O'Toole and assistant captains Grace Gibbons, Sophie Student, and Payton Kober. Sam Leslie (last year's Most Improved Player), Emma Viens, Alie Hyland, and Riley Schumacher are the other seniors on the team. Schumacher shares goaltending duties with Alicia Souliotis '21, one of eight V Formers on the roster. Three IV Formers and a single III Former round out this veteran-heavy squad, off to an impressive start this autumn. Girls' JV soccer is off to a winning start at 4-1-1 (averaging 4 goals per game and allowing just 1.5 per contest) while the girls' 3rds team is close to .500. 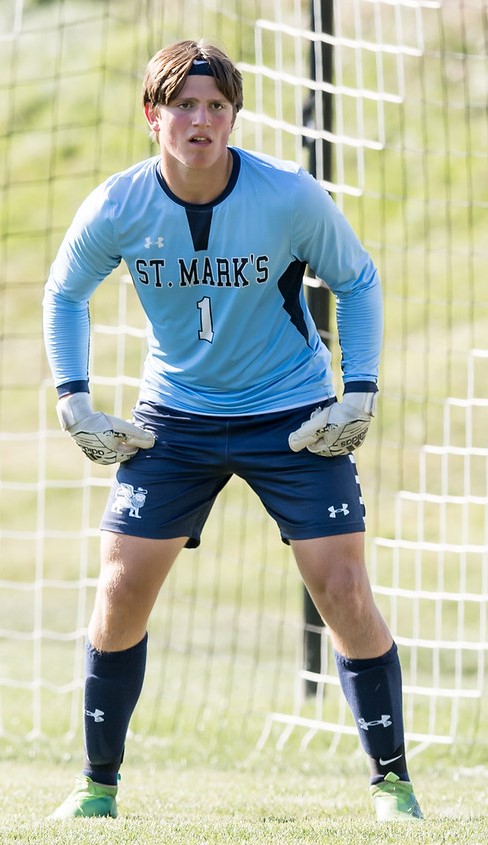 Boys' varsity soccer has a new coach in Eric Anderson and they too are flirting with a .500 mark in what was initially predicted to be a building year. Last fall's MVP, goalkeeper Brendan Gibbons has been outstanding. He made 20 saves including a stopped penalty kick, to secure a 2-1 win over Brooks, and he earned a shutout victory against Lawrence Academy. Other highlights have included two goals and three assists from captain Connor Flaherty '20 in a win over Millbrook, and the play of V Former Tom Haugen, who scored against Millbrook and also scored the game-winner against Brooks.

Varsity football also has a new coach in Anthony Figueiredo. While the team has struggled in what is clearly a building campaign, improvement has been steady. It is a young squad, with only four VI Formers on a roster of 33 players. Last year's Smith Football Prize recipient Joe Felix '20 and All-ISL Honorable Mention selection Jordan Uzochukwu '20 are leaders in the backfield and on the line respectively, while another ISL HM honoree—Jacob Silvester '22—gives hope for the future.