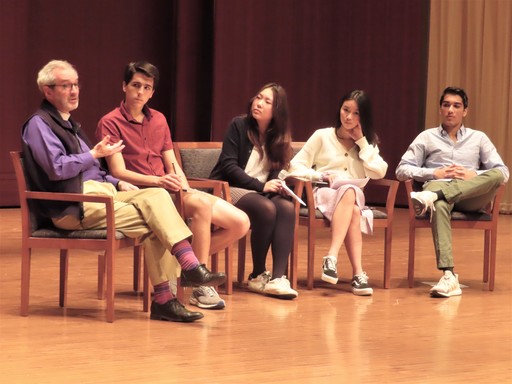 On Thursday, October 17, the Right Reverend Alan Gates, bishop of the Episcopal Diocese of Massachusetts, visited St. Mark's. The School, and especially its historic Belmont Chapel, are part of the Diocese as Episcopal institutions, and the bishop formally visits every four years along with celebrating at services of confirmation for members of the St. Mark's community from time to time. 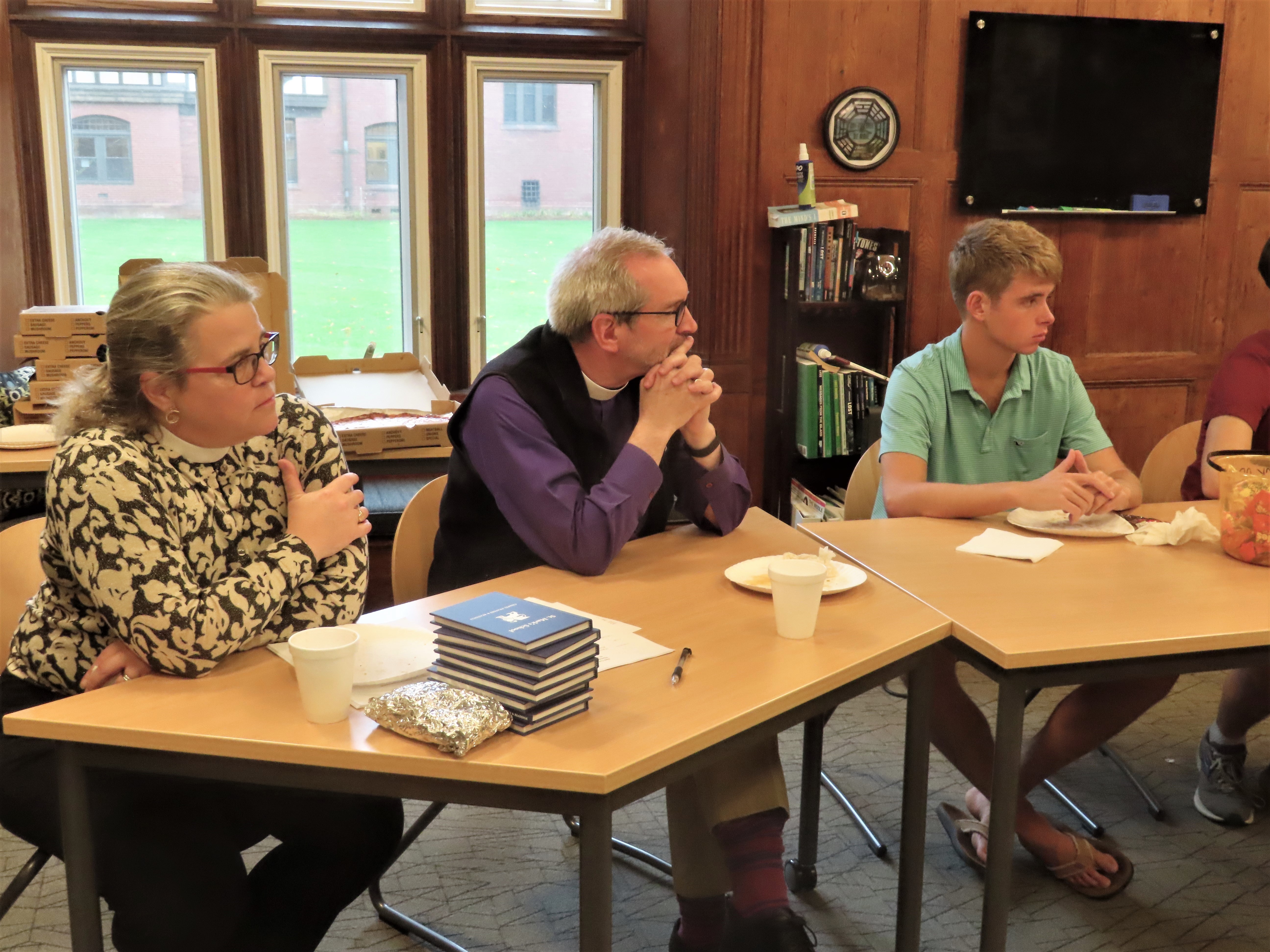 Bishop Gates began his day at St. Mark's by having a casual lunch with student representatives from a variety of affinity groups. He listened to their perspectives on St. Mark's, religion, and the regular Chapel services held twice each week.

Lunch was followed by the second presentation in this year's Gray Colloquium speaker series, with Bishop Gates as the featured guest. Instead of a prepared lecture, four students from the Gray Colloquium committee—Jack Griffin '20, Suha Choi '22, Sunny Li '22, and Rohan Kapur '20 interviewed the bishop on the stage of the Putnam Family Arts Center's Class of 1945 Hall. The theme of this year's Gray Colloquium is "Civil Discourse," and several of their questions reflected this emphasis.

Among the questions asked were these:

Bishop Gates' responses to these and other, more personal questions ("Do you feel non-religious people treat you and your words differently because of your career?" "What does God mean to you?") were well-received by the audience—all students and faculty. He spoke about having conversations with laypeople opposed to his involvement in "political" issues, about the Episcopal Church's inclusive and welcoming embrace of the LGBTQ community, about God as love, and much more. 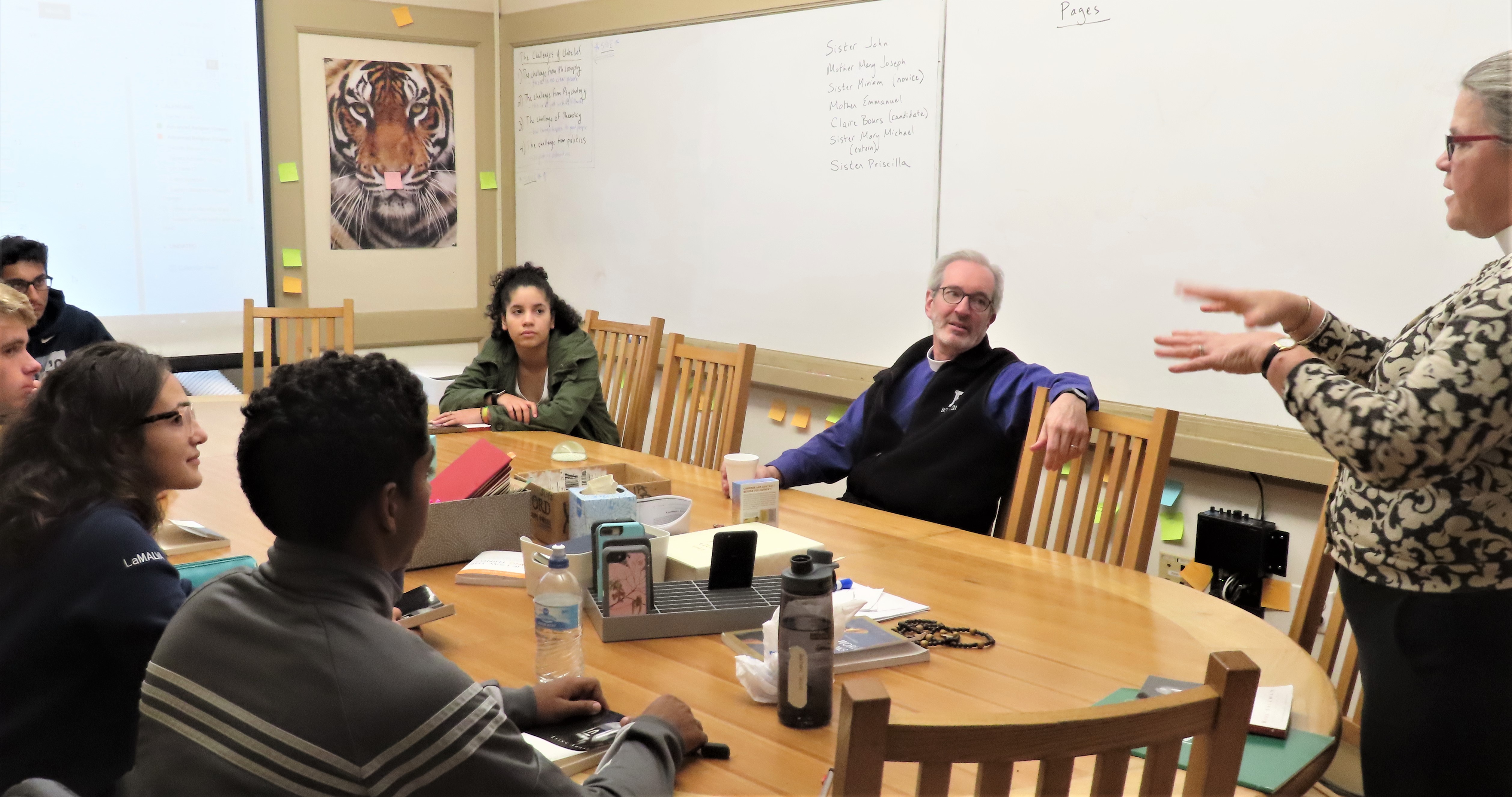 After the presentation, Bishop Gates attended religion classes taught by Rev. Talcott and Rev. Solter. Like his luncheon gathering with the affinity groups, these gave him insight into how St. Mark's students saw and responded to religion in the curriculum. The breadth and depth of material covered—philosophical, historical, and theological—in an atmosphere of open discussion and analysis was impressive. 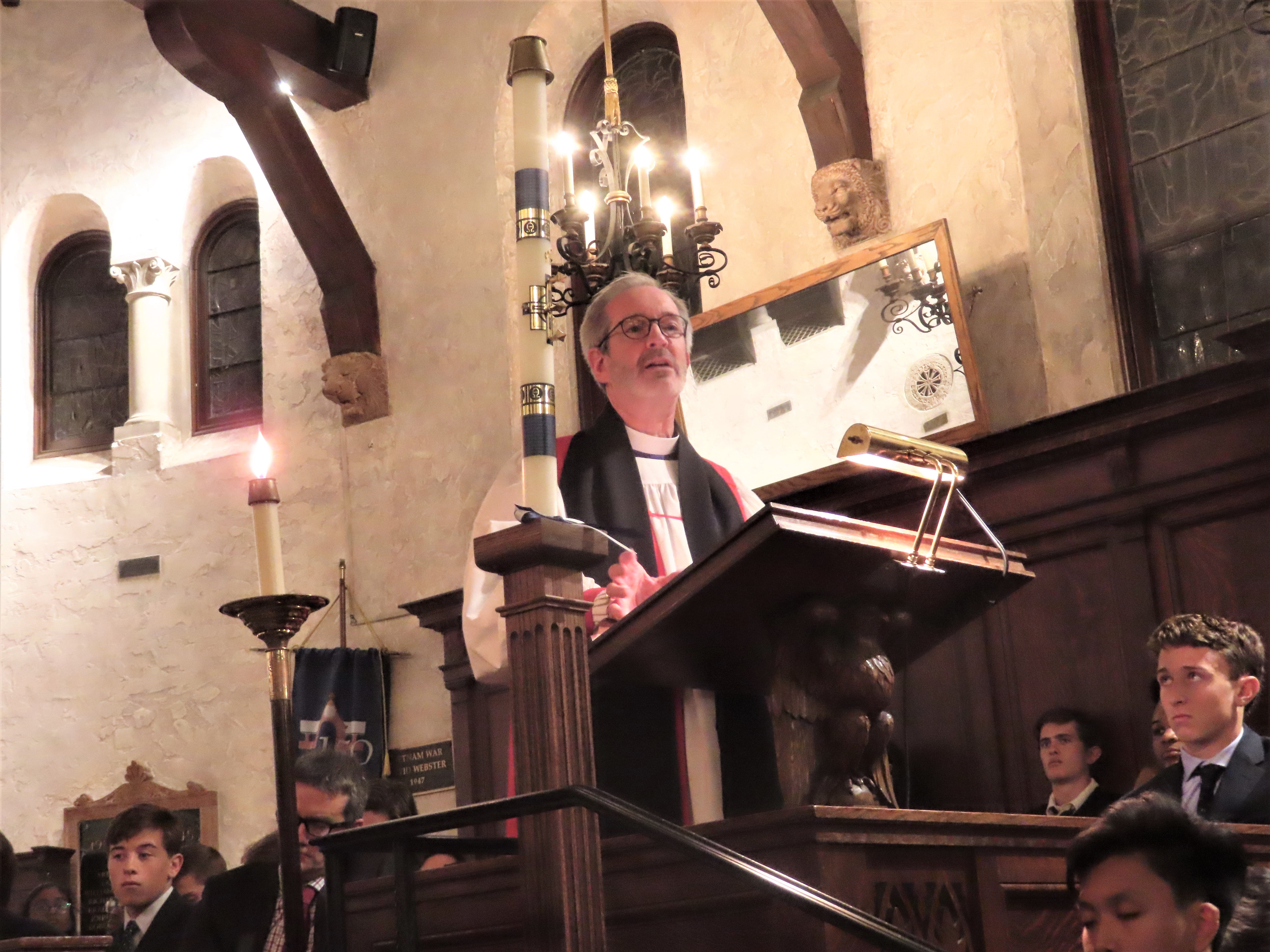 Following formal seated meal in the dining hall, Bishop Gates delivered the homily at the evening service in Belmont Chapel. He spoke about the power of "fantasy" in a spiritual life, citing passages not only from scripture but from the writings of Ursula K. Le Guin and a passage from J.R.R. Tolkein's Lord of the Rings. The choir also sang Beethoven's "Welten Singen" from Christus am Ölberge (Christ on the Mount of Olives). The service ended with the traditional School Prayer and School Hymn, and with a blessing from Bishop Gates.

A graduate of Middlebury College, Gates worked as a Russian language translator, researcher, and intelligence analyst for the U.S. Department of Defense, including a tour of duty at the State Department, before entering the ministry. Since ordination, he has served in parishes in Lynn, Hingham, and Ware, Massachusetts, as well as in the Dioceses of Chicago and Ohio. He has been bishop of Massachusetts for five years, and is a member of the Standing Commission on World Mission, and of Bishops United Against Gun Violence.