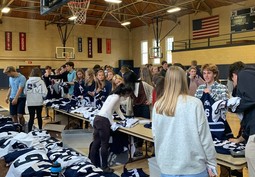 On Monday, October 28, the St. Mark's Student Athletic Council held an "antique jersey" sale to benefit the nearby Marlboro Boys & Girls Club. Old and retired St. Mark's athletic uniforms went up for sale to help an organization that has been supported by community service at St. Mark's since 1899.

"We had an awesome time participating in the St. Mark's jersey drive for the Boys and Girls Club today!" said Hartmann. "There were a lot of older jerseys taking up space in the athletic storage rooms, and it was brilliant thinking by the Athletic Department to sell them for a good cause to a student body that wants to show off their school pride!"

"It was a very successful event," said St. Mark's Athletic Director John Levandowski. The Athletic Council hopes to continue its fundraising efforts by opening up sales of the jerseys to alumni.