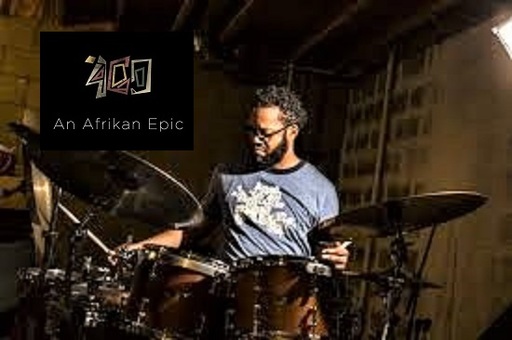 "I think it's the job of the artist to create work that inspires and uplifts so we can, together, move forward to a future that we create," says Dr. Mark Lomax II. On Thursday, November 7, Dr. Lomax will come to St. Mark's to present portions of 400: An Afrikan Epic, his acclaimed 12-album cycle that tells the story of Black America over the past 400 years.

Co-sponsored by St. Mark's Gray Colloquium series, the School's Community and Equity and Global Citizenship programs, and the Arts Department, the performance will take place in the Putnam Family Arts Center's Class of 1945 Hall, beginning at 1:00 p.m. This is the only New England stop on Lomax's current tour.

Released this past January, 400: An Afrikan Epic explores thousands of years of pre-colonial Afrikan history, the Ma'afa (the 400 years between 1619 and 2019), and Afro-futurism expressing a vision of what blacks in America will heal toward in the next 400 years.

Lomax, a critically acclaimed composer, recording artist, drummer, activist, and educator, is a Wexner Center for the Arts at the Ohio State University Artist Residency 2018 Award recipient. A highly sought-after lecturer, Lomax specializes in the socio-political and spiritual aspects of African-American art, music, race, and the usage of the arts to build community.

"There has never been a time in my life that music was not a part of me," Lomax says. Influenced by his father, a pastor, and mother, a composer of gospel music, Lomax was introduced to gospel and jazz at an early age. He continued his study of gospel music with Dr. Raymond Wise, founder of the Center for the Gospel Arts. In addition to performing with gospel choirs around the country, Lomax also boasts impressive jazz credentials. He has toured with the Delfeayo Marsalis Sextet and worked with notable artists such as Clark Terry, Marlon Jordan, Azar Lawrence, Bennie Maupin, Billy Harper, Nicholas Payton, Ellis Marsalis, and Wessel Anderson, among others. Jazz Times says Lomax's "forceful drumming would have made Elvin Jones proud."

Dr. Lomax, who was also a 2017 Denison University Mellon Artist-In-Residence, holds a doctor of music arts degree in composition from The Ohio State University. His varied experiences have allowed him to create a unique blend of styles in his music.

"As a school that cares deeply about diversity and global citizenship, we are very excited to collaborate as different departments to bring Mark Lomax's musical epic to campus," said Dr. Laura Appell-Warren, director of global citizenship at St. Mark's. "We have woven lesson plans into many of our classes that connect with the music the students will hear on November 7, and look forward to seeing how the music brings the story of the transatlantic slave trade to life for our students."