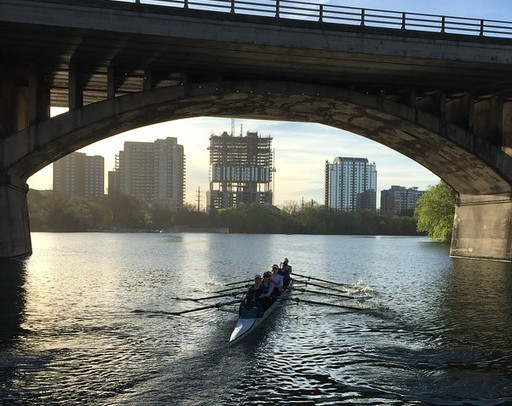 There are more than 60 St. Mark's graduates currently participating in athletics in colleges and universities. Most of them take part in what are generally seasonal sports, and their endeavors are detailed on this site after each season is finished. But rowing transcends the seasons. It is a year-round commitment, competitive in the fall and the spring, and the St. Mark's rowing legacy has been carried on by several alumni this fall.

Several members of the extended St. Mark's community raced in the 2019 Head of the Charles Regatta on October 19-20 in Cambridge, Massachusetts. Recent St. Mark's graduates and current NCAA rowers raced particularly well this weekend: Sophie Haugen '18 coxed the Harvard-Radcliffe Club 4+ to a 4th place finish out of 56 crews, taking her crew all the way from the #55 ranked crew to #4 over the course of the race. Ben Hunnewell '18 also finished 4th out of 58 crews in the Boston University men's club 4+. Steven Burke '18 also finished 4th out of 40 crews for Virginia in the men's Collegiate 4+ race on Sunday. Racing together for the first time since the 2016 St. Mark's Girls' Varsity Four that went 16-1 in NEIRA racing, Desmond Goodwin '16 and Samantha Sarafin '17 helped propel the Harvard-Radcliffe Varsity 8+ to an 8th place finish in the Championship 8+ event, passing NCAA powerhouse Michigan, to finish as the 6th fastest Division I crew in the regatta.

But St. Markers row not just in collegiate races in the fall, spring, and summer, but they also take part in rowing competitions beyond even their college years. Also at the Head of the Charles, Liza McBride '11 rejoined her old Princeton teammates and helped a very speedy Princeton Alumni 8+ to a HOCR bronze medal, finishing ahead of 41 other crews and only 1 second behind silver medalist Dartmouth Alumni. St. Mark's Associate Director of Donor Relations Megan Hyland, competed for the first time in a double and took home an impressive 9th place finish out of 40 crews in the Directors Challenge Mixed Doubles event on Sunday, racing for Quinsigamond Rowing Club, proudly representing St. Mark's own Donahue Rowing Center! Additionally, the entire regatta once again saw superb leadership and organization by Bracknell Baker '01, a member of the Head of the Charles regatta race committee.

Other St. Markers rowing at the college and university level include Madison Falzon '16 (at Syracuse), Keely Dion '17 (the George Washington University), and Haley Dion '19 (Duke).

At St. Mark's itself, this rowing legacy has been carried on by Liz Cavanaugh '04, head coach of the School's girls' crew team, while the boys' crew team has been coached by Chris Becker '11. 2020 will be the 150th anniversary of St. Mark's first-ever outside athletic contest: a rowing race in 1870. As the School's oldest competitive sport, crew started it all.