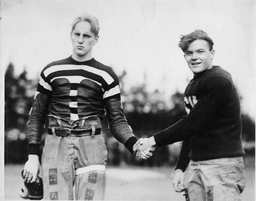 This Saturday, November 9, St. Mark's teams will square off against opponents from Groton, continuing a rivalry that goes back 133 years. The two schools are once again vying for the coveted raccoon coat, while kicking off the yearlong competition for the Burnett-Peabody Bowl. In 1886, the game was simply for bragging rights between the only two Episcopal boarding schools in Massachusetts.

The very first contest between St. Mark's and Groton was a football game, played at a neutral site in Lancaster, Massachusetts, on October 30, 1886. St. Mark's was the senior member of the pair, having been founded some 17 years before Groton. St. Mark's was also the favorite that afternoon, as its football team was undefeated so far that season. It was, however, a touchdown scored by a young Groton master—William Greenough Thayer—that gave the win to the upstart Grotties. There was no SM-Groton game in 1887, as the two schools were arguing over the participation of faculty members on varsity teams. A year later, the gridiron rivalry resumed, as both sides agreed that teachers (with restrictions as to playing weight and numbers) were allowed. Faculty would play on student teams for both schools right up into the first few years of the twentieth century. 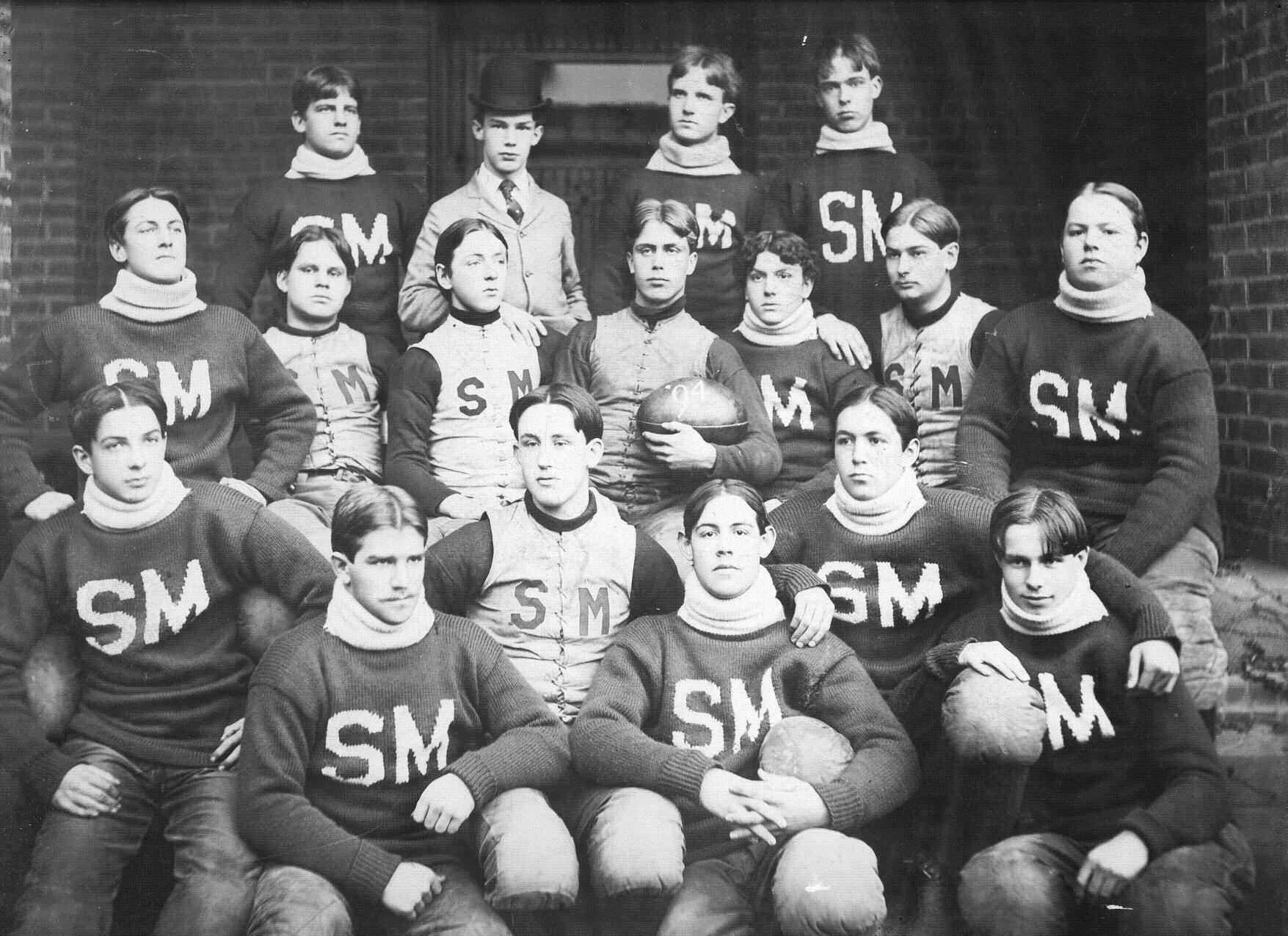 The first SM-Groton baseball game was played in 1887. St. Mark's lost that one too. But over the years, St. Mark's would post an overall winning record on the diamond against its longtime rivals. Success on the gridiron, however, was later in coming. The first St. Mark's victory over Groton finally happened in the fall of 1894. In an exquisite irony, St. Mark's had a new headmaster that year: William Greenough Thayer. (Pictured at left, the 1894 team: first SM team to beat Groton)

St. Mark's is responsible for coining "the Zebras" as a nickname for Groton. In the early 1900s, Groton began wearing black-white-and-red striped football uniforms. St. Markers began referring to their opponents as "bloody Zebras," avowing that Lions loved to feast on zebra meat. The name stuck, but even today the Zebra is only Groton's "unofficial" mascot, as opposed to the winged lion, which has always been connected with St. Mark (for almost 2,000 years now) and thus officially to St. Mark's School. (Photo above right shows SM and Groton captains shaking hands before the 1923 contest)

Over the years, competition with Groton grew beyond football and baseball. In the United States, the game of Fives was, for many decades, only played at Groton and St. Mark's. The winner of the annual Fives contest between the two schools could thus rightfully claim the title of national champion. The first crew race between the rivals took place in the 1930s. The earliest soccer games, also in the 1930s, were invariably against Groton. More and more sports were added, including hockey but never wrestling. An outstanding Southborough School field hockey team first met Groton in the fall of 1975, battling it out to a 0-0 tie. The first St. Mark's girls' team to take on Groton was the varsity field hockey team in the fall of 1977. The first SM girls' team to beat Groton was the varsity soccer team in the autumn of 1981. (1981 SM girls' varsity soccer pictured here). 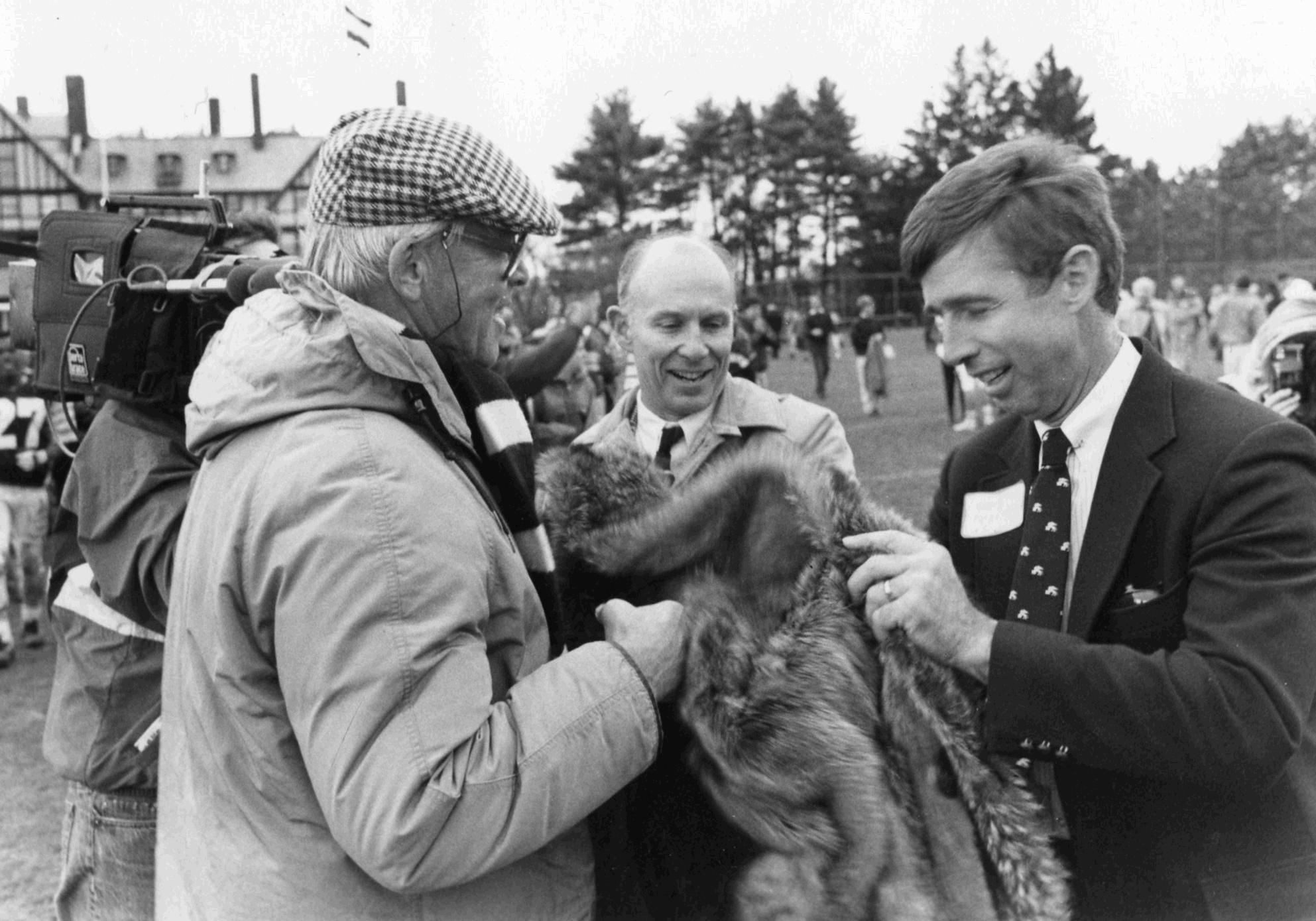 In 1989, the 100th football meeting between the two schools (no Groton-SM games were played in 1887, 1891, 1918, or 1945) was held on Belmont Field. At the end of the game, Groton graduate and former Massachusetts governor Endicott "Chub" Peabody presented his raccoon coat to the winner for the very first time: naturally, the home team (see photo at left). For a number of years after that, the coat went to the school that won the football game. More recently, it has gone to that school which has won the most head-to-head contests at any level during the fall season. In 2011, St. Mark's and Groton established the Burnett-Peabody Bowl, named for the respective founders of each institution, to be presented to that school winning the most games played between them over the course of a school year. 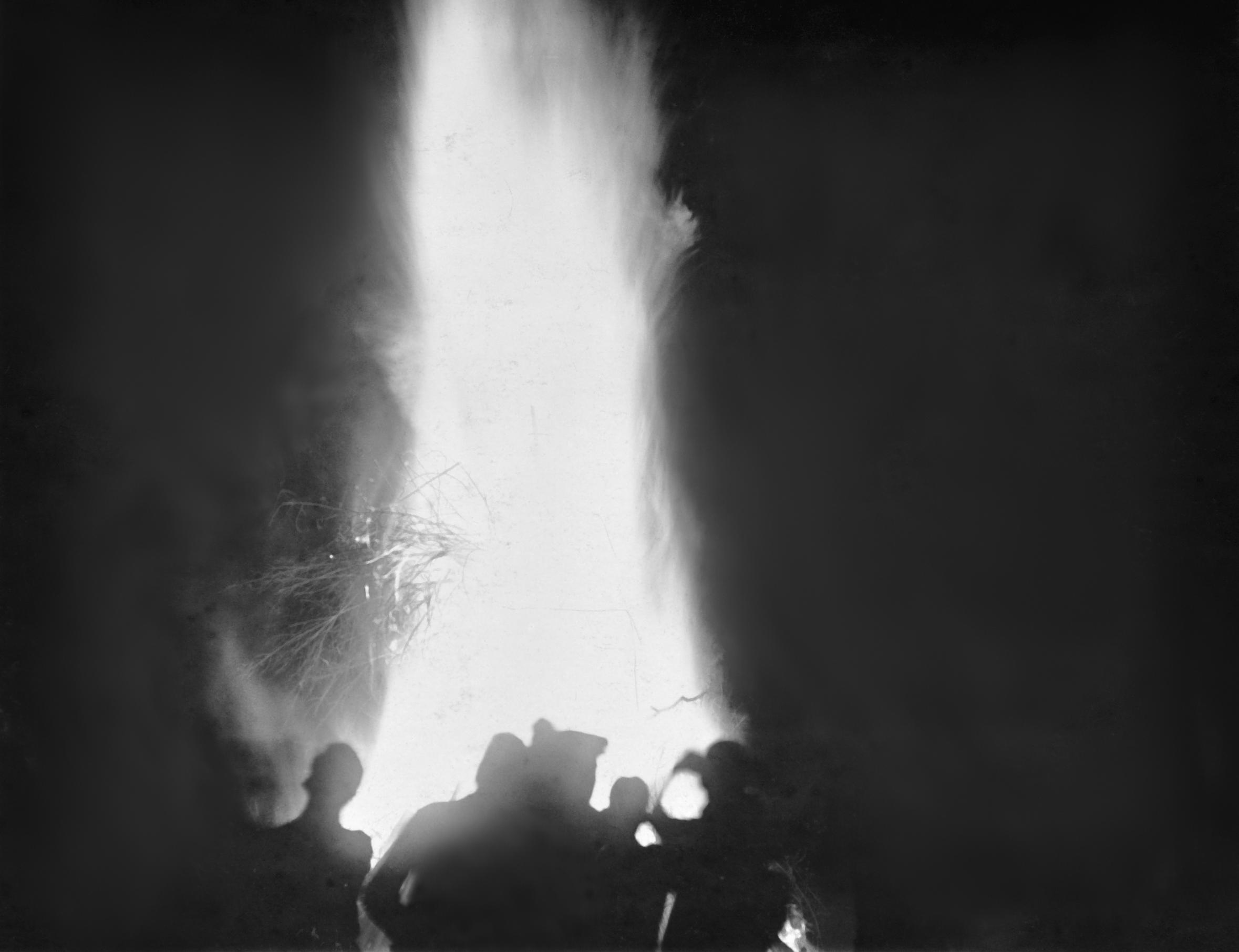 Pre-Groton game traditions at St. Mark's each fall include five days of "Spirit Week" with a Friday night rally culminating in a bonfire, and the Snake Dance on Belmont Field on Saturday morning. In the old days, it was the headmaster's wife who led the Snake Dance. Since the late 1990s, heads of school have led the line, and Mr. Warren will do so this Saturday. There are Groton Day shirts, alumni returning to see the games, and action aplenty for all. (pictured at right: an SM Groton weekend bonfire in the 1920s)

Groton has held the Burnett-Peabody bowl for several years now, but it was only last fall that the Zebras were able to (narrowly) wrest the coveted raccoon coat from the Lions.

As both schools ready for Saturday's games, St. Mark's already goes into the weekend with a 3-2 edge over Groton this season (with victories in boys' varsity and JV cross country and in girls' JV cross country), but there will be eight games on Saturday (SM needs to go at least 4-4 on the day to take home the coat) and anything can happen.

In the rivalry's long-standing tradition of sportsmanship and healthy competition: good luck to all!