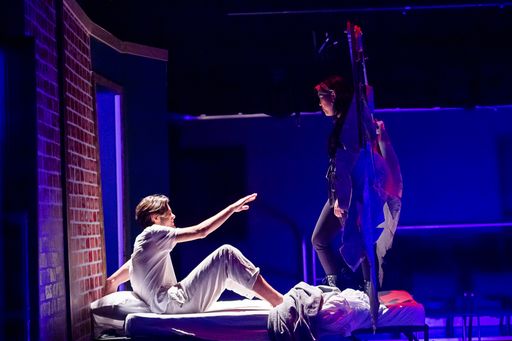 The first part of Kushner's two-part play Angels in America: A Gay Fantasia on National Themes, which won the Pulitzer Prize for Drama and the Tony Award for Best Play, Millennium Approaches takes place in New York in the mid-1980s, in the midst of the AIDS crisis and the Reagan administration.

We asked Theater Arts teacher Chris Kent, director of the production, to answer a few questions about the St. Mark's production of Millennium Approaches.

Q: Angels in America is, in a way, very much of its time. How does the play resonate today? Are there themes that seem especially relevant to you in today's political or cultural landscape?

A: Angels in America will always feel timeless to me. Even though it is set in the late 1980s and details the Regan administration and the AIDS epidemic, it is ultimately for me a story about love and death and the human connections we make and break. It often feels topical and relatable for our students because the political climate described in the script is polarizing, just like today. Also, the themes of sexuality and identity will always be relevant, as will the idea of confronting ones' own mortality. That isn't to say that we haven't had to take time to unpack who Ethel Rosenberg is or what it meant to have AIDS in 1985 versus today, but at the core, our play is about relationships and identity.

Q: What is your personal experience with the play as both a director and an audience member?

A: I was first introduced to Angels in America as a student at Beloit College. I was taking a script analysis class taught by my theater director and he had us table-read the script early on in the semester. He asked me to read for Mr. Lies, and I remember being fascinated by the language. After class ended, I stayed in our green room and finished the script. I had to know what happened. I was hooked. A few months later the HBO miniseries came out and all of my friends and I got together to watch the premiere. I was blown away by how seamlessly Emma Thompson and Meryl Streep could play such an array of different characters. When I first started teaching high school theater in California, I used to use scenes from Angels in America in all of my acting workshops. Two years ago, my Theater 2 class studied the play and performed a variety of scenes from Millennium Approaches in class. Many of those students are in this production and it has been fascinating to see the progress they have made as actors over their time at St. Mark's.

Q: What sorts of challenges have you faced in regard to staging the play in the Black Box? Has it proved more difficult from that perspective than other recent selections?

A: I always tell the perspective families that I tour at St. Mark's that the Black Box is the reason I came to St. Mark's, and it is true. I love the space. It is intimate yet offers immense flexibility. We have been able to stage shows like The Curious Incident of the Dog in the Night-Time in the round, orient the space in a thrust for The Pillowman, and even built a two-story set for Noises Off two years ago.

Still, with Angels in America, I knew that we would have to be creative in our use of space and ultimately work to divide the stage into multiple acting zones. There are 26 scenes in the play and over 10 different locations that need to be suggested. Although we have done plays with multiple scenes before, never have we taken on this scale. We have almost 100 light cues and over 35 sound cues, including live sound that needs to be monitored. Not only that, three weeks ago I changed my mind about how I wanted half of the set to look.

The students on our crew are exceptional and have created a visually compelling space. Still, the show is full of technical challenges, including multiple dream sequences and the arrival of an angel. At the end of the day it is a challenging show that is not taken on by many high school directors. And honestly, if we hadn't just come from performing at the Edinburgh Fringe Festival in Scotland this summer, I'm not sure I would have had the courage to stage this show. However, I was extremely impressed by our students at the festival and their willingness to dive into any role, into any play, and not back down from challenging scripts. They have proved, over the past two months, to be more than up for the challenge of this play, and we are excited to share it with the St. Mark's community.

A powerful theatrical experience, this St. Mark's production features outstanding performances by a talented cast, backed by a hard-working crew.