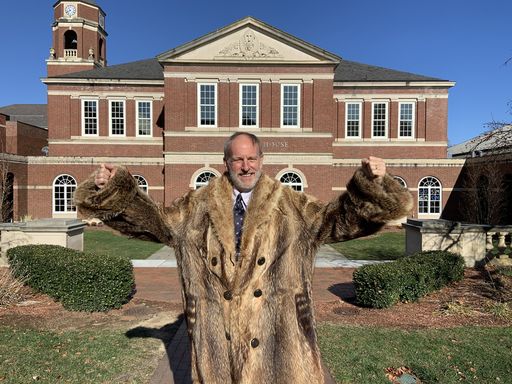 On Saturday, November 9, in a triumphant end to the 2019 fall sports season, varsity field hockey edged Groton 2-1 in overtime for St. Mark's fourth win of the day over their historic rival, winning back the coveted raccoon coat and sending Coach Colleen Finnerty's team to the New England playoffs.

The raccoon coat, symbol of autumn athletic supremacy between St. Mark's and Groton (competitive rivals since 1886) was first presented at the close of the 100th football game between the two schools, back in 1989. It had belonged to Endicott Peabody, Groton's founder, and it was worn that day by his grandson, Endicott "Chub" Peabody—Groton alumnus, former Zebra football captain, and one-time governor of Massachusetts (1963-1965). Governor Peabody declared that he would give the coat to the winner of that historic game. When the Lions proved victorious, he presented it to then-St. Mark's headmaster Chris Mabley, and a tradition was born. While at first the coat went to the winner of the football game, the custom would be changed, and for the better part of the last two decades it has gone to whichever school had the best record overall against the other during the fall season. In 2011, the Burnett-Peabody Bowl was created, named for the founders of each school, to be awarded to the best overall record in the rivalry during a given year.

Heading into Saturday's eight scheduled contests, St. Mark's already held 3-2 edge over Groton, with victories in boys' varsity and JV cross country and in girls' JV cross country. On Saturday, St. Mark's wins in girls' JV soccer, boys' thirds soccer, and JV and varsity field hockey gave the Lions a 7-6 record over the Zebras this autumn and the raccoon coat.

Two St. Mark's teams have earned postseason berths in New England Preparatory School Athletic Conference competition. Varsity field hockey, coached by St. Mark's alumna Colleen Finnerty '11, having posted a 12-5 record and featuring an impressive defense (allowing less than a goal-and-a-half per game with four shutouts) will play Governors Academy on Wednesday in the Class B field hockey New Englands. In the N.E. Class B soccer bracket, girls' varsity soccer, 8-7-4 on the season and coached by Associate Director of Athletics Lauren Ames, will face Lawrence Academy on Wednesday. Both games are home at St. Mark's, starting at 2:00 p.m. These should be exciting games. Girls' varsity soccer beat Lawrence earlier in the season, while field hockey lost a thriller in overtime against Governors during their regular season campaign.