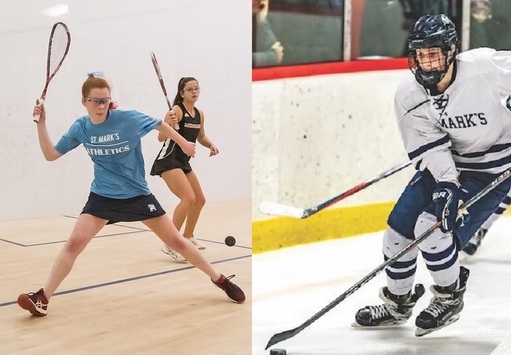 Practices are already well underway for the upcoming winter sports season at St. Mark's. The first games took place during the week after Thanksgiving break (see below) and the prospects are good across the board.

Boys' varsity hockey hopes to build on its excellent 19-win season last winter, as virtually all its key starters are returning. Last year's Most Valuable Player, Ian Moore '21, is back. Recently, the New England Hockey Journal featured the V Form defenseman from Concord, Mass. as the top junior prep player in the region. An All-ISL and All-N.E. pick for 2019, Moore will once again be joined by St. Mark's 2018-2019 top scorer and Maker Prize recipient Danny Ciccarello '20 (also All-ISL and All-N.E. last season), fellow All-ISL defenseman Tucker Hartmann '20, and All-ISL Honorable Mention forwards Brendan Gibbons '21 and Jackson Coutu '21. Veteran Will Bundy '20 will see action in goal, along with Adam Costley '22. Coach Carl Corazzini (91-46-11 to date as SM head coach) also has some new younger talent. His team, led by captains Ciccarello and Hartmann along with assistant captains Moore and Von Mabbs '20, are hoping to top the Eberhard Division in ISL competition and the small school New Englands. First, however, they are aiming for their sixth Barber Tournament title in nine years during this upcoming winter break.

Under coach Michele Killeen, girls' varsity squash set a program record with 12 victories last winter, finishing in 2nd place at both the New Englands and the Nationals. Among returning veterans is All-ISL HM Samantha Leslie '20, and she is joined by fellow VI Formers Paula Hornbostel, Charlotte Galusza, and Paige LaMalva. A host of younger talent is also on hand, not only from last year's varsity, but also from winning JV and 3rds teams in 2018-2019. Things are looking good for their 2019-2020 campaign.

Boys' varsity squash was also 2nd at Nationals (as well as 4th in New England) last year, behind the strong play of Most Valuable Player Ryder Henry '20, who will be a mainstay of this winter's squad. Henry will be joined by classmates Connor Flaherty (Most Improved in 18-19) and Dom Mongillo, along with V Former Preston Dotson. Coach Dan Shartin, now in his 32nd year leading the Lions, can also expect contributions from a host of younger players coming up from last season's winning JV and 3rds teams. Hopes are high that the varsity boys can equal or surpass last year's 12-win mark.

Varsity wrestling also had a dozen victories in 2018-2019. Coach Dave Nelson has a number of returning veterans, including All-ISL HM wrestlers Tom Banse '20, Louis Lyons '20, Luis Perez '20, and Christian Dwirantwi '21. Will Appell '20, last years Most Improved wrestler is also back, and hopes are high for another strong campaign, perhaps even bettering its sixth-place finish at last year's Graves-Kelsey Tournament.

Girls' varsity basketball has a new coach. Joe Dicrutallo comes to St. Mark's from the Dublin School in Dublin, N.H., where he led both the boys' and girls' teams to league championships, as well as taking the Dublin girls to the NEPSAC Class E Championship Game. At St. Mark's, he will be able to take advantage of the skills and the leadership of three-time SM MVP and three-time ISL ALL-Star Ava Limonciello '20. The lineup also features several returning players, including Niki Noel '20 and Brooke Farrell '21, co-captains with Limonciello.