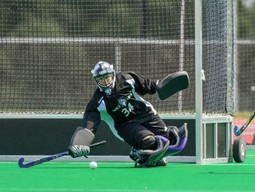 As many as 75 St. Mark's graduates are currently active in college and university athletics, and more than 30 of them participated in sports this fall.

Eight St. Mark's alumnae played college field hockey this autumn. From the Class of 2016, three seniors have made a significant impact on the sport.

For four seasons, Marcia LaPlante '16 (pictured at right) has been one of the best collegiate field hockey goalies in the country. She appeared in 70 games for Holy Cross over the course of her career. Her 636 total saves, 9.1 saves per game, and 29 saves in a single game versus Harvard are among the best in Holy Cross history. As a freshman in 2016, she topped NCAA Div. I in save percentage, and as a junior in 2018 she led the nation in saves per game. This fall, the senior was again among the top 10 nationally in saves, save percentage, and saves per game, leading the Patriot League in the latter category. She has been honored as Patriot League Rookie of the Year and Goalie of the Year, and has been a multiple All-Patriot League selection (including 2019). At St. Mark's, LaPlante was an All-ISL goalie in ice hockey and played defense on the field hockey team, but she had never played goalie in field hockey at the varsity level until she arrived on the Holy Cross campus. She has earned a spot on the Canadian National Indoor Field Hockey roster. 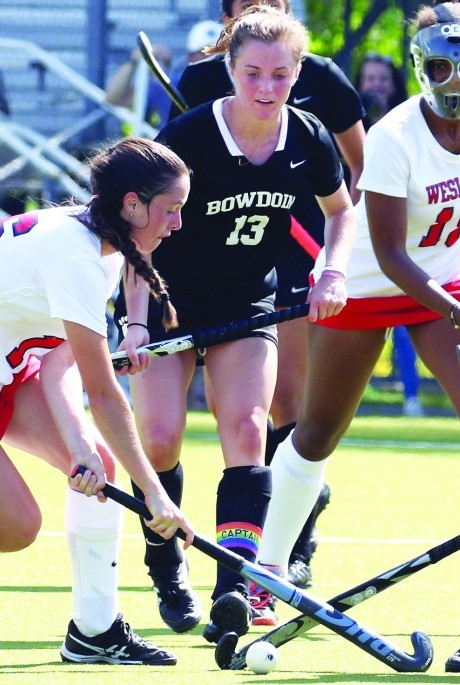 Equally impressive has been the Div. III field hockey career of LaPlante's St. Mark's classmate, Kara Finnerty '16 (pictured at left). Finnerty started all 65 varsity games for Bowdoin over four seasons, helping lead the Polar Bears to an overall record of 46-19 during that time, including a 14-2 mark this past autumn. She scored 36 goals and tallied 24 assists on her career. The latter mark is seventh-best ever at Bowdoin, while her 94 points also puts her in the top 10 in the Bowdoin record book. Three times she has been a New England Small College Athletic Conference (NESCAC) All-Star selection, and she has twice earned Div. III All-America honors from the National Field Hockey Coaches Association (NFHCA). Finnerty has earned NESCAC All-Academic recognition as well. A multiple All-ISL selection in both field hockey and lacrosse during her time at St. Mark's, she still will complete her storied Bowdoin lacrosse career this coming spring.

Marissa Feller '16 has appeared in 59 games and made 47 starts for Williams College field hockey. The versatile defensive player made a significant contribution to this year's powerful Williams defense, which allowed just 0.81 goals per game in fashioning a 13-4 record. An All-ISL Honorable Mention selection at St. Mark's, Feller has been a force to be reckoned with for the Ephs.

Twice All-ISL and St. Mark's MVP, Tatum Schultz '17 has appeared in 51 games over three seasons for Dartmouth. This fall, as in each of the previous two campaigns, she tallied three goals and had two assists for the Big Green. Grace Sambrook '18, another multiple All-ISL selection and SM MVP, has appeared in 42 games over two seasons for Wake Forest. This year she had a single goal for the 9-11 Demon Deacons—a key score in a shutout victory over Richmond—and she has four goals on her college career. Sambrook's St. Mark's classmate, Lizzy Provost '18, played a solid defense for Trinity College this fall, as the 8-8 Bantams allowed fewer than two goals per game. She has 28 games under her belt atop the Summit Hill in Hartford, Connecticut. A psychology major, the former All-ISL selection has been named to the NFHCA Div. III National All-Academic Team.

A couple of first-year college players from St. Mark's have also seen field hockey action this autumn. Lindsay Strong '19 appeared in 13 games on defense for Wellesley College, including one start for the 10-9 Blue. Faith Jennings '19 was a teammate of Kara Finnerty's at Bowdoin. This year, she had one goal as a freshman: the Polar Bears' only score versus Hamilton in the NESCAC tournament. 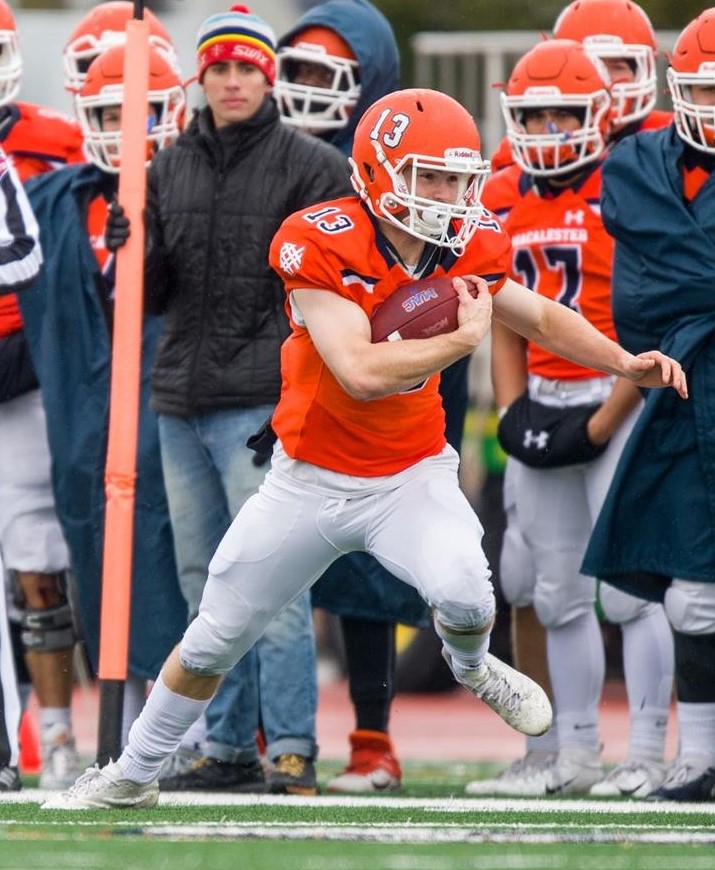 Nine St. Markers played college football this fall. A junior at Macalester College in St. Paul, Minnesota, former Fearing Athletic Prize recipient and All-ISL honorable mention quarterback Brody Fuller '17 (left) is a now wide receiver. In 10 games this fall he had 11 catches for 145 yards and a touchdown. The score came in a 42-3 victory over Grinnell for the 4-6 Scots. On his college career to date, Fuller has 13 receptions for 159 yards and one touchdown. He was also a Midwest Conference All-Academic selection and serves on the Student Athlete Sustainability Committee at Macalester. 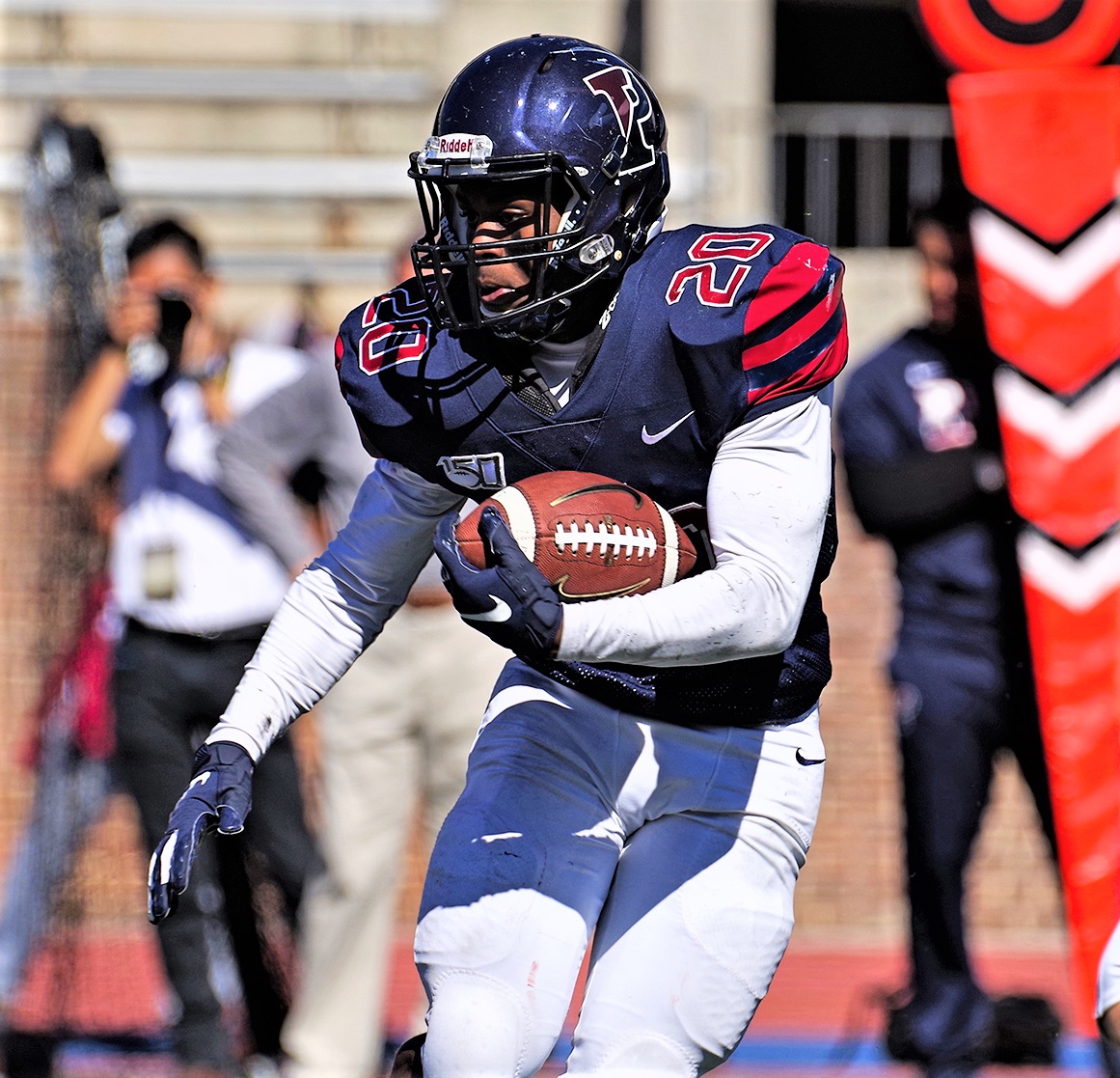 Laquan McKever '18 (at right), the St. Mark's record-holder for most rushing yards in both a season and a career, has continued his running ways as a key member of the varsity sprint football team at the University of Pennsylvania. This year, he led the 5-2 Quakers in rushing, with 130 carries for 796 yards (113.7 per game; 5.9 per carry) and seven touchdowns. He also had 13 receptions for 85 yards and a score. His 894 all-purpose yards led the team, and he was named to the All-CSFL (College Sprint Football League) first team on offense.

Tyreese James '18, a sophomore offensive lineman for the WPI football team, was effective on special teams this season. The Engineers went 10-1 this fall, and James, only a sophomore, saw substantial time on kicks (eight games), as WPI averaged 43 points per game, making 60 of 62 extra points with nine additional field goals. While at St. Mark's, James was a four-year letter winner in football. Anthony D'Angelo '18, a two-time All-ISL honorable mention honoree while at St. Mark's, was red-shirted as a walk-on at Wake Forest during his freshman fall. He is currently on the roster as a defensive back for the Demon Deacons.

Five college freshmen from St. Mark's also played football this fall. Patrick Dei '19 is a second-string offensive lineman for Colby. Dei's St. Mark's classmate, Tyler Gonsalves '19, also plays for the Mules. He had a single tackle as a backup linebacker. Like Gonsalves, the rest are also defensive players. At Franklin & Marshall, linebacker Ben Winters '19 appeared in two games for the 7-4 Diplomats. C.J. Schumaker '19 appeared in nine games on the D-line for the 6-5 Engineers of RPI. He registered 16 total tackles (10 solos, six assists) and had two sacks.

Most impressive has been Alex Batista '19, a freshman defensive back for the still unbeaten Mules of Muhlenberg College in Allentown, Pennsylvania. The 2019 Centennial Conference champions are currently 13-0, having advanced to the semifinals of the NCAA Div. III tournament. Batista has had 23 solo tackles, four assists, and one pass broken up so far this season: an integral component of the third-best scoring defense in the nation. Indeed, thanks to its outstanding defense, Muhlenberg this year became the first team in the history of the NCAA to win their first two NCAA tournament games by shutouts. On December 14, Batista and the Mules will take on North Central Illinois, and the winner of that contest will advance to the national final game on December 20. 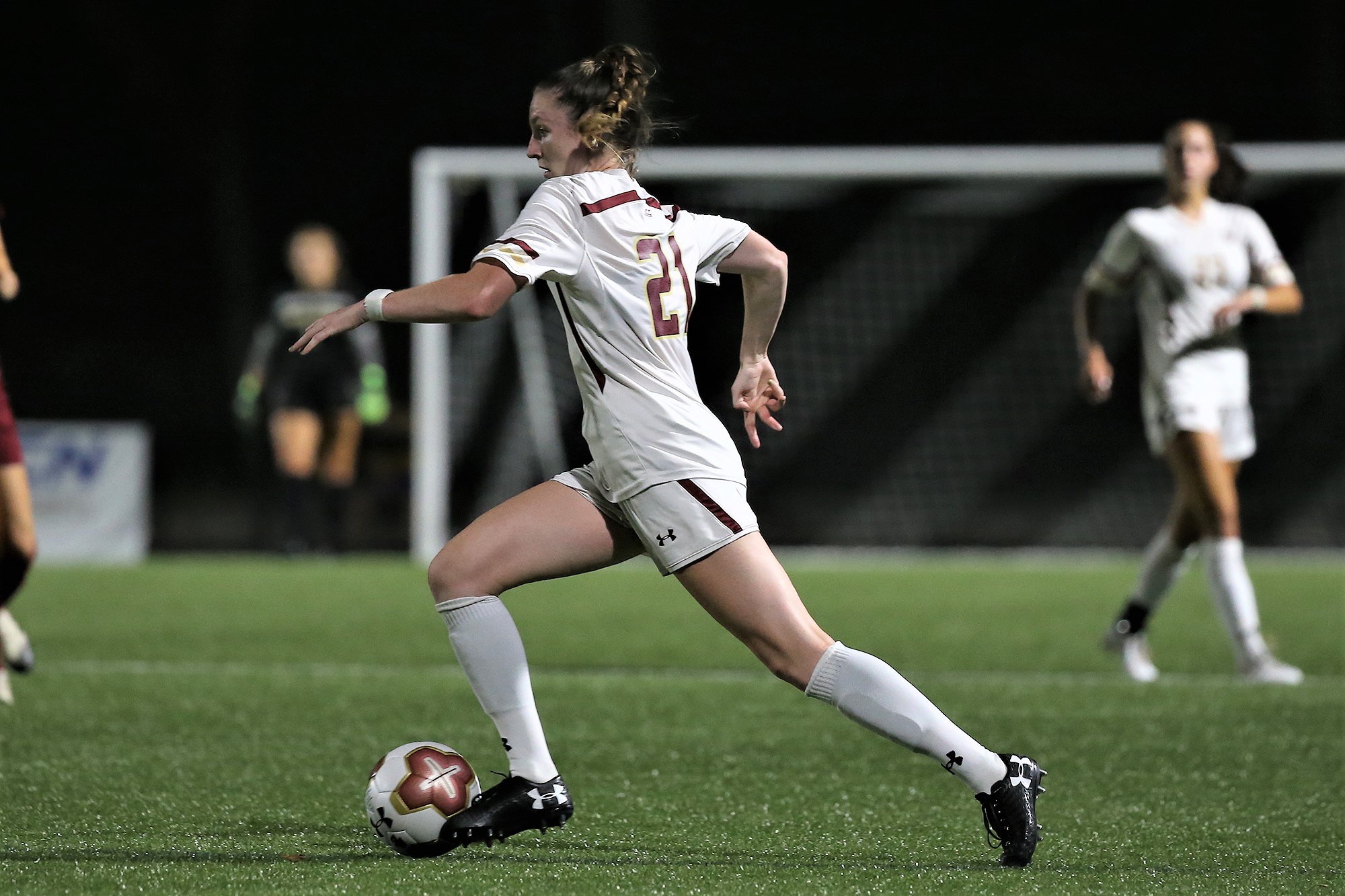 Eight St. Markers are playing women's varsity soccer in college. Riley Lochhead '17, a two-time All-ISL selection and St. Mark's MVP, is a defender for Boston College. Among the leaders in assists each year for the Eagles (8-8 this past season), Lochhead has received the BC Athletic Director's Award for Academic Achievement and has been named to the Atlantic Coast Conference Honor Roll.

Keelie Verbeek '18 has transferred from Emerson to Maryland's Washington College, where she appeared in 13 games for the 6-8-3 Shorewomen, starting in six of them. Verbeek was named to the Centennial Conference Academic Honor Roll. Her St. Mark's classmate, Hailey DuBose '18, plays for UMass-Lowell. This year, for the 4-11-2 River Hawks, DuBose—twice named to the All-ISL team and a past St. Mark's MVP— scored a key goal in a 2-1 victory over Maine. 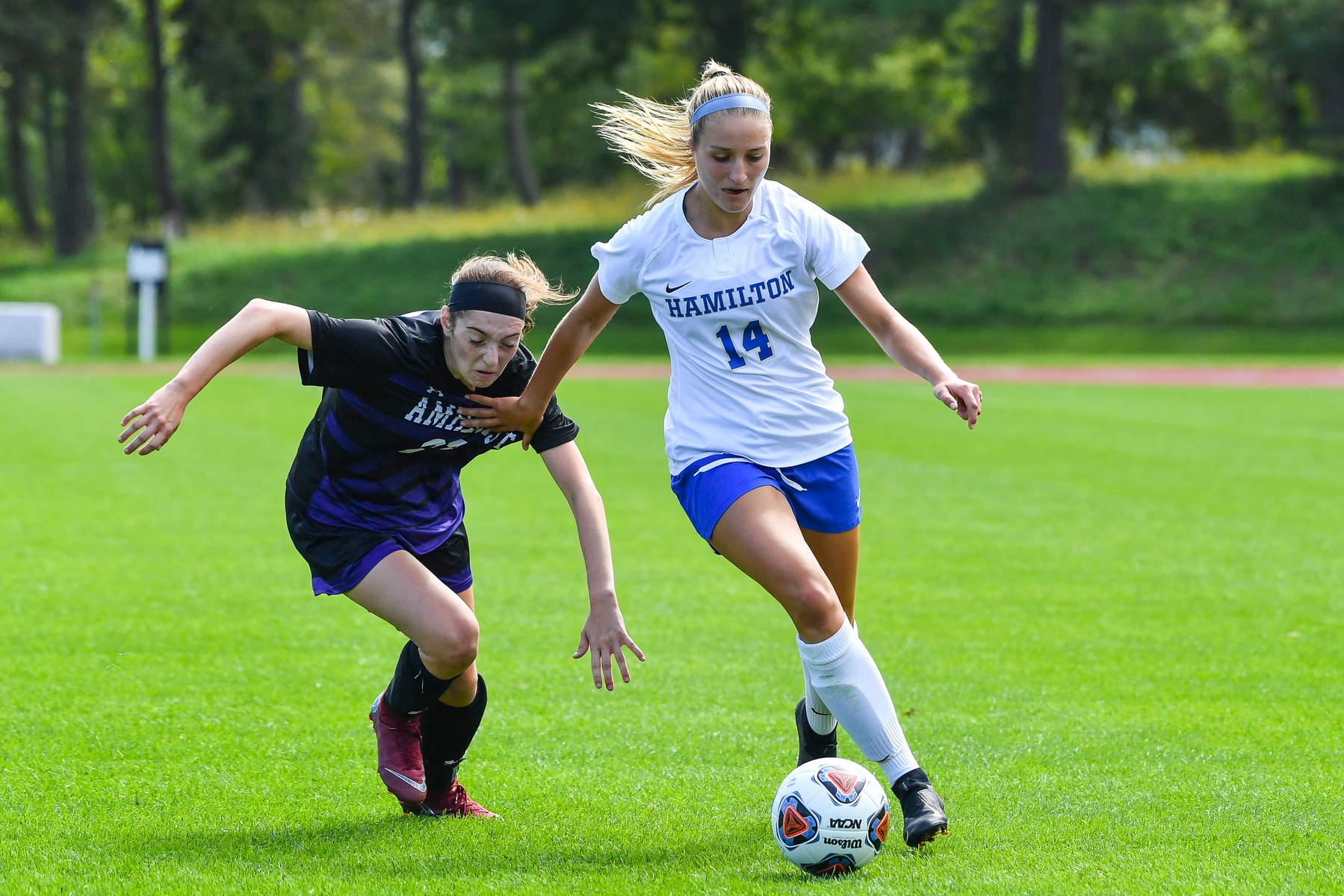 Caroline Dawson '19 (at left) is one of five St. Markers playing women's soccer as college freshmen. Dawson was the third-leading scorer for Hamilton, with five goals and six assists. Her best day was against rival Connecticut College, when her goal and assist accounted for both scores in a 2-0 victory for the 10-5-1 Continentals. A two-time All-ISL selection and St. Mark's MVP, Dawson twice faced St. Mark's classmates on the college soccer pitch this fall. Shelby Howard '19 appeared in 10 games for the 2-11-2 Bates Bobcats. Both she and Dawson will also be playing college lacrosse this spring. Kerrie Verbeek '19 played in 12 games (with four starts) for 5-6-3 Colby. Verbeek, an All-ISL pick last year, scored three goals on the 2019 season, two of them game-winners. She put the Mules ahead for good against Husson, and her overtime goal against Maine gave Colby a 3-2 win.

Teresa Meyer '19 appeared in 16 games (with seven starts) for the 10-6-1 Diplomats of Franklin & Marshall. She had the key assist on the lone goal in a thrilling 1-0 win over Muhlenberg. Zoe Maddox '19, twice an All-ISL goalie while at St. Mark's, was a backup goalkeeper on the roster of the 5-4-8 Holy Cross Crusaders. 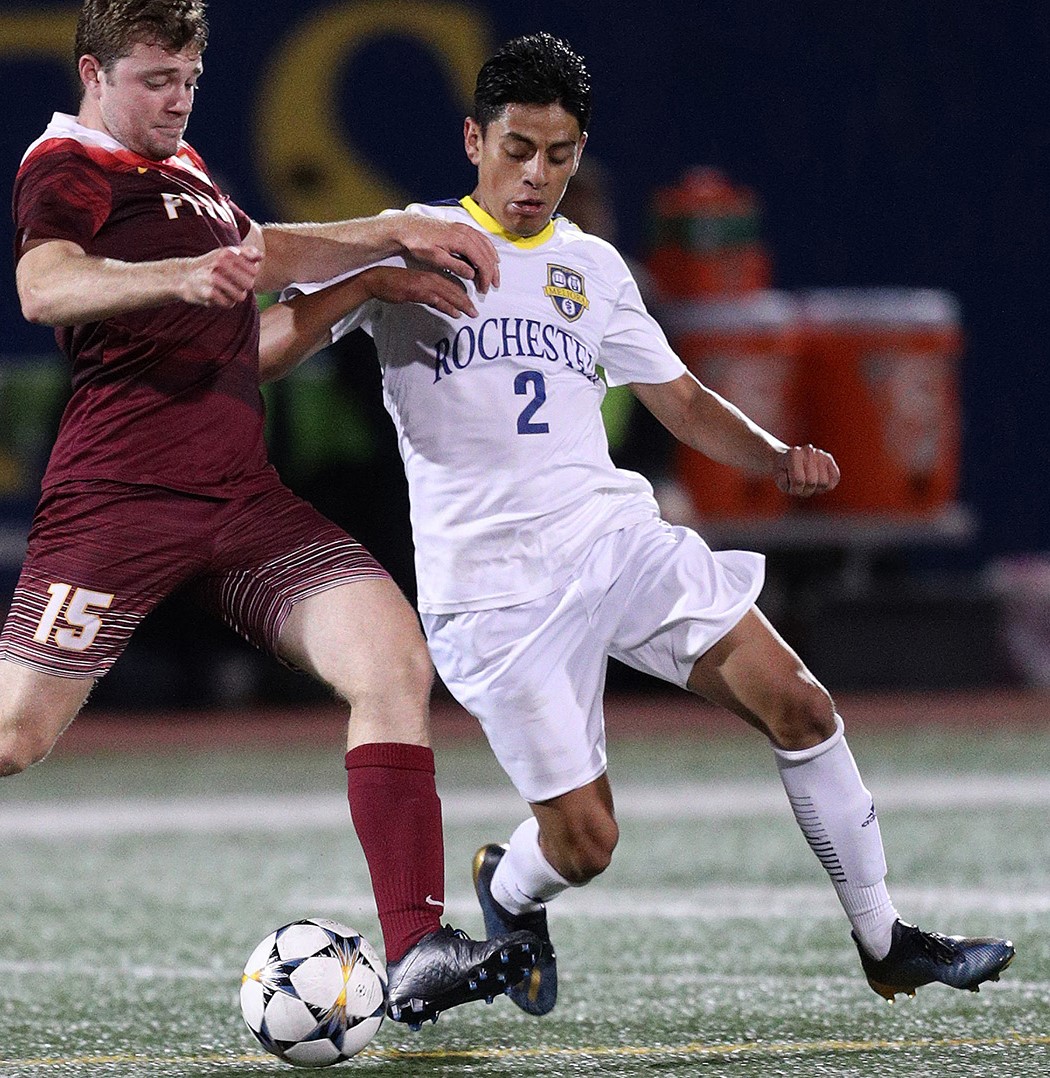 In four years playing men's soccer at the University of Rochester, Cristian Baltier '16 (right) appeared in 67 games. Playing both midfield and defense, he had nine assists during that time, among the top 10 for defenders in University Athletic Association (UAA). A former All-ISL selection and St. Mark's MVP, Baltier was once again a mainstay for the 12-6-1 Yellowjackets this fall.

Cole Schmitz '17 plays for Washington University in St. Louis. Although beset by injuries from time to time, the 2017 ISL All-Star has been a valuable member of the Bears' soccer program. This year, Washington went 8-7-1, and Schmitz was named to the UAA All-Academic team.

Matt Leigh '18 plays men's soccer for the University of Pennsylvania in the Ivy League. A two time All-ISL pick, St. Mark's MVP, and a N.E. Senior All-Star in 2018, Leigh is also the most prolific scorer in St. Mark's soccer history. In his second season at Penn, he earned significantly more minutes than he did last year. The sophomore was one of three forwards in 2019 who saw consistent playing time for the Quakers.

As a freshman at Denison, Luca Vicinelli '19—an All-ISL pick and N.E. junior and senior All-Star while at St. Mark's—appeared in six games for the 7-9-1 Big Red. His two goals came in the same game this fall: a big win over Penn State-Altoona.

St. Mark's two college cross country runners are both freshmen at Williams College. Grant Gattuso '19—a multiple All-ISL pick, twice St. Mark's MVR, and New England All-Star during his time in Southborough—looked strong in the freshman/sophomore race at the Monmouth Invitational. He came in seventh in the 5K event at the Purple Valley classic and continued his winning ways at the Keene State Invitational. In a field of some 200 runners from all levels of college, university, and amateur competition, Gattuso came in 77th in the USA Track & Field N.E. Cross Country championship race (ninth among collegiate entrants). Williams won both the Little 3 and the NESCAC team championships this past fall, in large part because of their depth and the potential displayed by their youngest runners. "We have a neat freshman class," said Ephs coach Pete Farwell. Among those freshmen was also Rwick Sarkar '19. Rwick finished in 135th place (25th among collegiate entrants) in the very competitive USATF N.E. field.

Payton Nugent '16 competed in her final season as a member of the University of Rochester's Women's Rugby club. After a fifth place finish in the National Small College Rugby Association Women's 7 National championship tournament, Nugent and the Sledgehammers had a challenging campaign this past fall, going 1-4 in regional competition.

At the college level, there are a couple of spring sports that see action every fall. 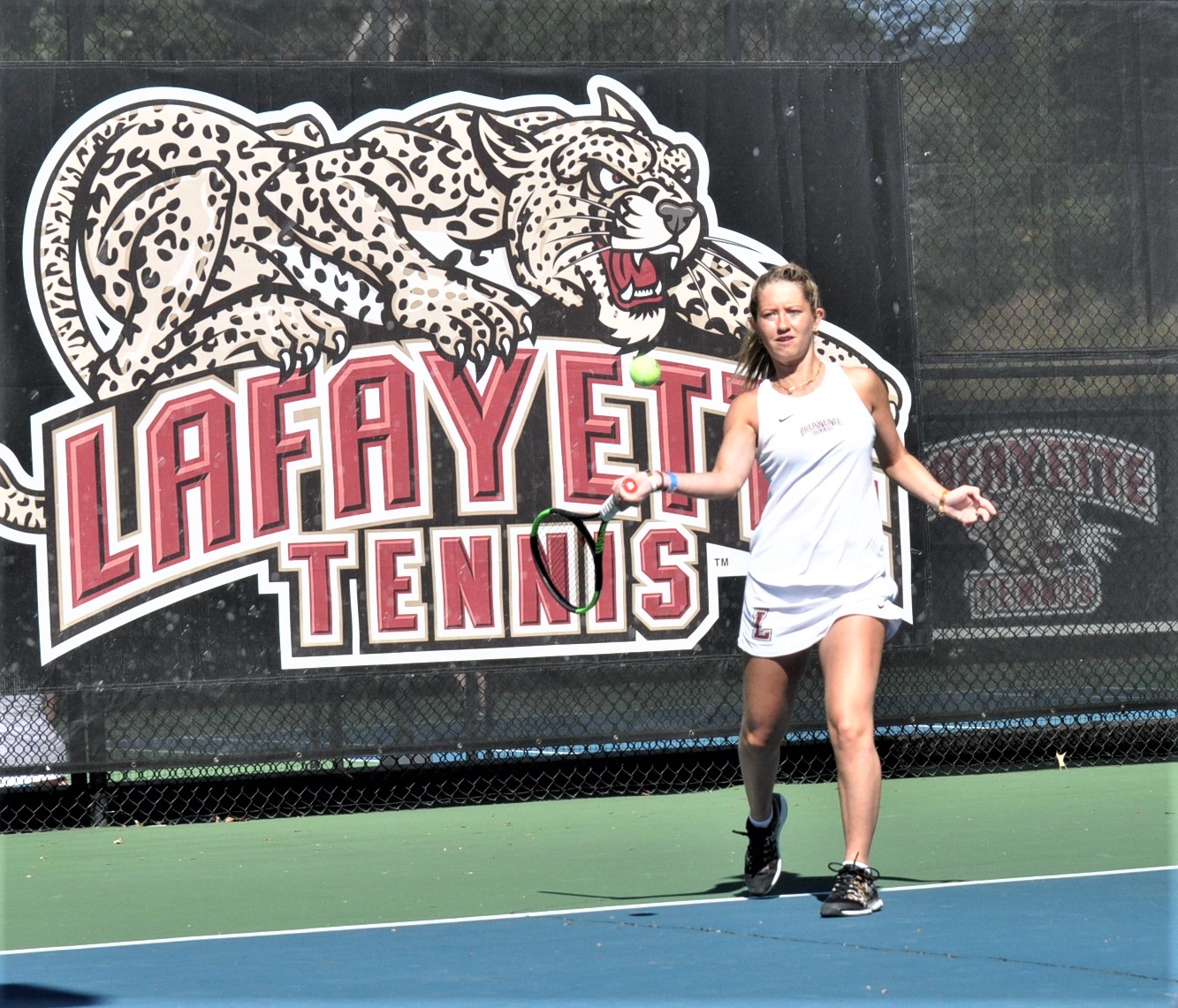 Women's tennis is one such sport. Grace Conrad '16, officially a junior at Lafayette, continued her winning ways this fall for the Leopards. Playing #5 singles she won against Rider. At the #2 singles spot she won over both Monmouth and Moravian. While not as successful in doubles play, she consistently excelled in singles competition, finishing in seventh place at the annual Loyola Invitational.

Congratulations to all these St. Mark's Lions who have gone on to contribute their talents to college and university athletic programs.