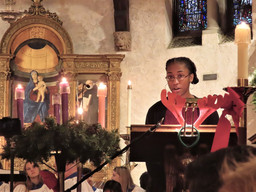 This past week, St. Mark's held its annual Service of Lessons and Carols on Thursday evening, December 12, and again on Sunday afternoon, December 15. The service is considered a traditional Christmas event at many (if not all) Episcopal boarding schools, as well as numerous colleges and churches around the world.

The service was introduced at St. Mark's during the tenure of music teacher J. Stanley Sheppard (at SM from 1942-1976), but came into its own under Tom Berryman, director of music from 1983 to 2013.

The format of the "Festival of Nine Lessons and Carols" (as it is formally known) is fairly standardized. The Nine Lessons, which are the same every year, are read by representatives of various constituencies at the School. The singing is divided into "carols" which are sung by the choir and "hymns" sung by the choir and congregation. The carols vary from year to year, although some music is repeated.

Traditionally St. Mark's has presented the Service of Lessons & Carols in its own Belmont Chapel, usually twice, in order to accommodate audience demand. In 2015 there was a single service, at Trinity Church, Copley Square, Boston, to celebrate the School's 150th year. Since then, the service has returned to Belmont Chapel, again on two different dates each year. The first for the School community (students and faculty) and the second open to the public.

Once again this year, the St. Mark's School Choir, under the leadership of Mr. James Wallace, director of music and Art Department chair at the School, presented a beautiful series of festive carols. These included the "Sussex Carol" (18th century), "I Wonder as I Wander" (20th century), "Torches" (traditional, from ancient Galicia), "Joys Seven" (from Medieval England), and "It was the Winter Wild"—an original piece by Mr. Wallace, with lyrics adapted from John Milton (17th century).

The entire School community filled the Chapel for the Thursday evening service, while more than 150 guests—alumni, faculty, families, and friends— attended on Sunday. That service was followed by a reception in the Hinkle Room. What a wonderful tradition celebrating the spirit of the season at St. Mark's!