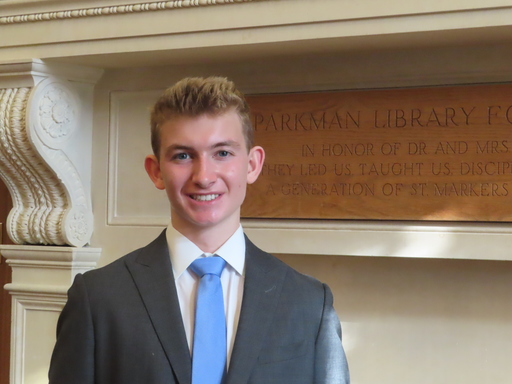 In April 2019, Charles Brookby '20 received an Anthony A. Jones Family International Studies Grant to fund a proposed trip to Germany. There, said Brookby, "I will 'walk' Martin Luther's path of Protestant reformation." Upon returning to campus this past fall, Brookby asked Head of School John C. Warren '74 to oversee an independent study project (ISP) researching Luther and other protestant writers and theologians in a special course.

Brookby, a boarding student from Mission Hill, Kansas, was prompted to pursue these experiences when, during his V Form year, he took an advanced religion course at St. Mark's. In the course, he would later write, "I was surrounded by very intelligent atheists who would give many different convincing arguments as to why the God I had come to know could not exist. I began to question my beliefs and I found myself experiencing a great deal of doubt in the God I had grown up with."

After the tragic loss of a personal friend, he began reading C.S. Lewis' book A Grief Observed. "I read the whole book in one sitting," Brookby recalls. "When I finished the book, I tried to apply Lewis' logic to my personal situation. At this point, faith began to find its way back into my life. I knew in that moment that I did not want to let go of what I had found, but rather develop it to become something I hold dearly and know deeply. At that moment the idea of my independent study was born."

Brookby designed a course where he would write a series of essays reflecting on his trip, and also critiquing Martin Luther's works. He would not only analyze his writings and opinions, but also share some of his own thoughts. "Though reason can only take you so far in a journey of faith," he said at the time, "I am eager to read the works of Luther, Lewis, Kierkegaard, and other theologians in an attempt to come to know my own beliefs better. By the end of this journey, I hope to find fulfillment in my own work, and peace of mind that my friends and other loved ones have found their peace."

Over the summer, Brookby visited historic sites, museums, and churches in Germany, following Martin Luther's footsteps and tracing the life and teachings of the father of the Protestant Reformation.

Back at St. Mark's, he read extensively: Luther's Concerning Christian Liberty: C.S. Lewis (Mere Christianity, The Screwtape Letters); writings of Ravi Zacharias, Soren Kierkegaard, and others. One-on-one discussions with Mr. Warren and further reading and research led to Brookby's writing a series of in-depth essays and reflections on individual works and topics such as "free will" and "the problem of evil."

On Thursday, January 16, Brookby gave a lecture and presentation on his summer travels and his research and insights to interested members of the St. Mark's community in the Library's Parkman Room. Afterward, he answered questions from the audience. It was the culmination of almost a year of thoughtful consideration, enterprising travel, intense research, and discovery both academic and philosophical.

"I am very impressed by the way Charles has continued to reflect constructively on what he studied during his Advanced Religion Class as a V Former, and on what he experienced during his time in Germany last summer," said Warren. "The independent course has provided an excellent vehicle for Charles' continued reflection because of the reading and the writing that Charles is doing. The depth of thought that Charles is displaying both about his chosen texts and about his personal experience of faith is truly extraordinary."

Thanks to the Jones Grant, Brookby was able to pursue a course of study that combined a personal quest with an academic interest, ultimately leading to a special independent experience uniquely available to a student thinking big in an intentionally small community.

The Anthony A. Jones Family International Studies Grants are intended to help finance "activities which are deemed by St. Mark's School to be educationally stimulating" in keeping with the wishes of the A. A. Jones family "to inspire international educational initiatives among current St. Mark's students.