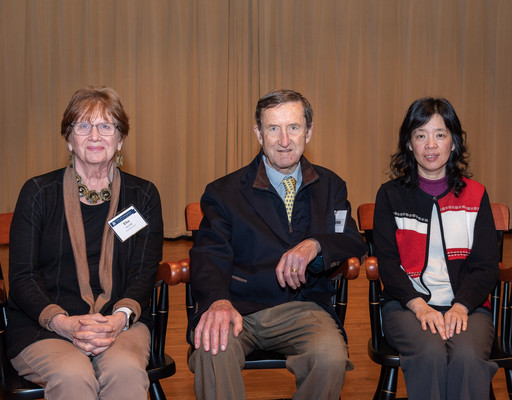 On Friday evening, January 24, St. Mark's faculty member Showjean Wu was installed as the first holder of the new Antony and Elsa Hill Asian Studies Chair at a ceremony in the Putnam Family Arts Center's Class of 1945 Hall.

The evening began with a musical prelude by Lanruo Lora Xie '20, a VI Former from Chengdu, China. She played the guzheng, a traditional Chinese stringed instrument similar to a zither, autoharp, or fretted dulcimer. The Right Reverend J. Clark Grew '58, clerk of the School's Board of Trustees and a St. Mark's grandparent followed with the opening prayer. Head of School John C. Warren '74 then welcomed the entire St. Mark's community.

Dr. Laura Appell-Warren, director of St. Mark's Global Citizenship program, introduced the keynote speaker, Kate Lynn Lindsey, assistant professor of linguistics at Boston University. After Lindsey's address, Mr. and Mrs. Hill, Mr. Warren's predecessors as heads of school at St. Mark's, came to the stage, along with their granddaughters, Ingrid and Ilsa Schrag. They shared their reflections on this momentous occasion.

Mr. Warren then presented the new chair in Asian Studies to Ms. Wu. Showjean Wu began the Chinese language courses at St. Mark's in 2011 and taught at the School through 2015. She then spent four years teaching Chinese immersion classes at the International School of the Peninsula in Palo Alto, California, before returning to Southborough this past fall to again teach Chinese I through Chinese V in the St. Mark's Modern Languages Department. A native Chinese speaker, she holds master's degrees in education and computer science.

A number of alumni and friends of the School, including members of the Class of 1958 in honor of their reunion, contributed to establishing the Antony and Elsa Hill Chair in Asian Studies.

During their 12 years in Southborough (1994-2006), Tony and Elsa Hill brought St. Mark's School into the 21st century. As co-heads of school, they oversaw an increase in enrollment, the renovation of significant spaces on campus, and the construction of both a new residential facility and a modern center for the arts. They fostered the work of talented faculty to introduce and implement modern communications technology throughout the campus. Indeed, they were responsible for bringing on board a number of outstanding educators, including eight who stayed at St. Mark's for 20 years or more and a dozen who are current members of the School's faculty.

Under the Hills, the curriculum became deeper and richer, and St. Mark's benefitted from a successful campaign which more than doubled the School's endowment. The Hills strongly supported diversity at St. Mark's, reaching out beyond the campus with endeavors such as the Friday Seminar Series and promoting international connections, particularly in Asia. On the occasion of their retirement in 2006, George Putnam III '69, president of the St. Mark's Board of Trustees at the time, said the Hills "left their mark on all aspects of St. Mark's. All their achievements, were accomplished without diminishing what has long been the School's greatest strength—its sense of community." Tony and Elsa Hill, he concluded, "have been the very epitome of the School's motto: Age Quod Agis."