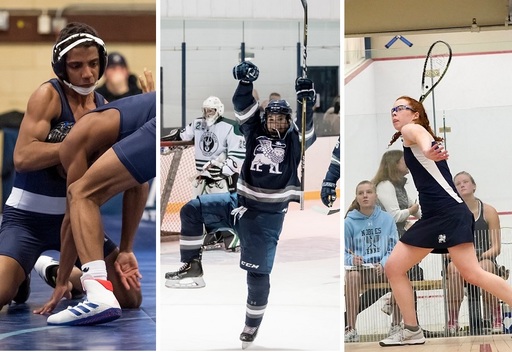 Heading into the midpoint of the winter sports season at St. Mark's, six varsity teams have posted records of .500 or better to date, and overall the School's varsity programs have a record of 43-30-2. Wrestling, boys' and girls' ice hockey, girls' squash, and boys' basketball are all looking strong.

Wrestling, captained by VI Form veterans Will Appell, Tom Banse, Louis Lyons, and Luis Perez, is currently 9-2 so far this winter, with six regular season meets remaining before the Graves-Kelsey Tournament, the New Englands, and the Nationals. Wrestling is one of only two officially co-ed sports in the Independent School League (ISL), and a special highlight of the 2020 campaign took place at the seventh annual Phillips Academy girls' wrestling tournament. Two St. Markers placed there in a record-setting field of 74 female wrestlers. Bethany Batista '21 came in second in her weight division, while Jiayi Yu '23 took home a third place medal in hers.

Boys' varsity hockey is also looking strong, sitting at 9-2-1 on the season as of January 28. Coach Carl Corazzini's potent offense is averaging 5.4 goals per game, and the team is currently tied with Rivers for first place in the ISL Eberhart Division. The Lions have yet to play Rivers (an earlier meeting between the top two Eberhart teams was postponed until February 10) but Groton already fell to St. Mark's 7-6 in the first of two scheduled games this season between the longtime rivals. There is strong leadership from co-captains Tucker Hartmann '20 and Danny Ciccarello '20 and assistant captains Von Mabbs '20 and Ian Moore '21.

Girls' varsity hockey has had excellent goaltending from both Lydia Rascher '20 and Erin Murray '21, together allowing only 1.92 goals per game. The offense could be a little more potent, but coach Casey Bates '09 is pleased with the effort, attitude, and progress of her team. Currently 7-6-1 with 12 games to go, St. Mark's girls' varsity hockey has a bright future ahead. The JV team is now 6-2, averaging 5.3 goals per game while allowing just 2.6 per contest, for an overall program mark of 13-8.

With a 6-4 record as of January 28 and just nine games to go, girls' varsity squash has been solid for head coach Shelley Killeen. Samantha Leslie '20 has played well at #1 throughout the campaign, and provides impressive leadership as a tri-captain with Paula Hornbostel '20 and Charlotte Galusza '20. The JV and 3rds teams, at 4-3 and unbeaten 3-0 respectively, have also been winners, and the overall girls' squash is the most successful athletic program at St. Mark's this winter, with a combined record of 13-7.

The overall boys' basketball program also has 13 victories (13-11 total), thanks in no small part to a winning varsity team currently 6-5. Head coach Ilya Nicholas has fashioned a more-than-respectable contingent of relatively young players. There are only three VI Formers on the roster: co-captains Bobby Sommers and JB Clarance and center Jordan Uzochukwu. They provide leadership and maturity as the Lions' basketball boys are off to their best start in five years. The team has already surpassed the entire win totals of any of the past four campaigns. The JV team is flirting with .500, while the 3rds team is going strong at 4-2.

Boys' varsity squash, second in the nation last year, is hanging tough at 3-3. In his 32nd year as head coach, Dan Shartin has the talents of VI Formers Ryder Henry, Dom Mongillo, and Connor Flaherty to draw on, ably abetted by V Former Preston Dotson (Co-captain with Henry). Both JV and 3rds are also around .500.

Girls' varsity basketball has a new coach—Joe Dicrutallo—and veteran leadership from tri-captains Ava Limonciello '20 (three-time St. Mark's MVP and three-time All-ISL), Niki Noel '20, and Brooke Farrell '20. Just 3-8 so far, the team has made excellent progress and the majority of games have been close and hard-fought.