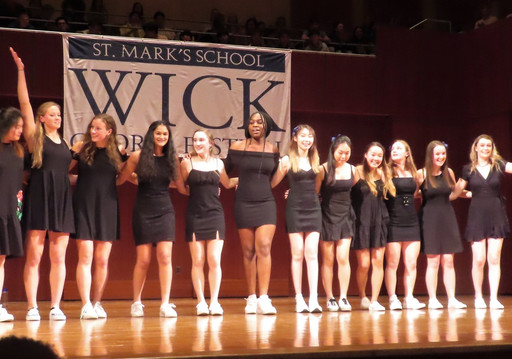 A capella music reigned at St. Mark's on Friday, January 30, and Saturday, February 1, as the 28th Annual Wick Choral Festival took place in the Putnam Family Arts Center's Class of 1945 Hall. Over both nights, the two St. Mark's a capella groups—the Royal Blues and the Marksmen—were joined by guest performers from both high school and college. Among the visiting acts were several talented St. Mark's alumni. 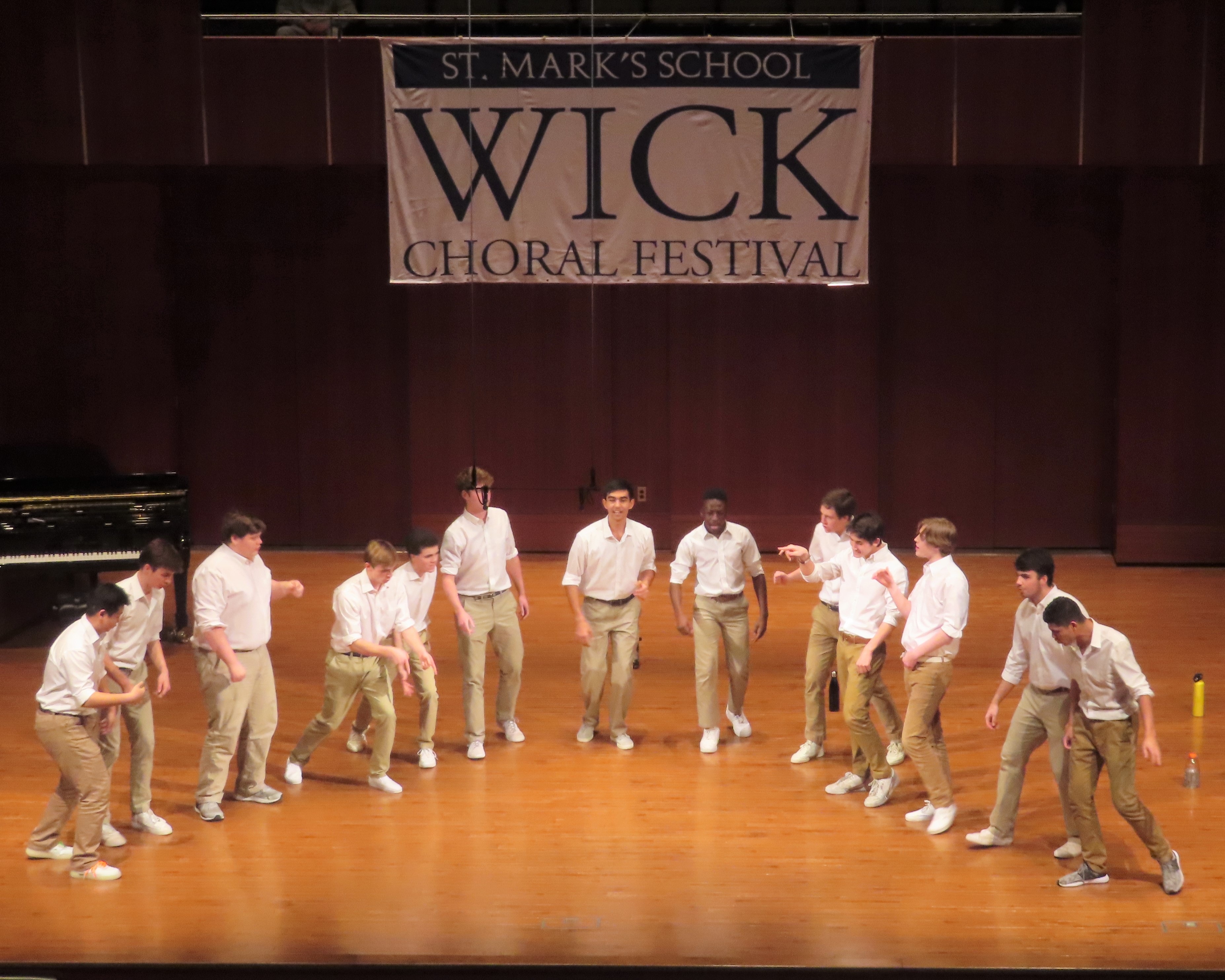 On Friday evening, after a welcome from Head of School John C. Warren '74, the music got underway. James Wallace, director of music at St. Mark's and chair of the School's Arts Department, introduced a series of talented a capella acts. In addition to well-received harmonious performances by the Marksmen and the Royal Blues, singing groups from Northfield-Mount Hermon (NMH), Algonquin Regional High School, and the Wheeler School were also featured.

From NMH came Hogapella (a male a capella group) and the Nellies (a female a capella group), back at the Wick Festival after missing last year. Members of both acts then combined as Northfield Mount Harmony. Algonquin returned to the Wick in style, presenting both Ladies First and Algoncapella, two entirely student-run acts made up of local students from Southborough and Northborough. Wheeler then brought to the stage the colorful and creatively choreographed 18 Wheelers: always a crowd-pleaser.

As is traditional at the Wick Festival, a visiting collegiate group closes out the evening with a featured set of several songs. On Friday it was the Buffers of Hamilton College, featuring St. Mark's alumnus Jonathan Shakespeare '18, a veteran of the Marksmen and now a sophomore at Hamilton. In addition, the Buffers invited another St. Mark's alumnus up to sing with them. Matt Golding '13, who sang with the Buffers during his time at Hamilton and with the Octet under former music director Tom Berryman while at St. Mark's, joined the college contingent on two songs. He currently works in advertising in Boston. The audience loved the Buffers and Friday night was very successful overall.

On Saturday, with Mr. Wallace ill, this year's Wick Festival's stage manager, Nolan Willoughby '21, took over the duties as Master of Ceremonies. The V Former from Midland, Texas, impressively garbed in a magenta suit, effectively introduced each high school act. This time the Royal Blues led off, their heavenly harmonies followed by the musical magic of the Marksmen.

Cushing A Capella from Cushing Academy then made its Wick Festival debut with some impressive vocal offerings. Directing the Cushing group was St. Mark's alumnus Josh Quinones '08. Quinones, who sang for Mr. Berryman in several Wick Festivals while at St. Mark's, returned to the School in 2013 to help run the Wick Festival. Now a member of the English faculty at Cushing Academy, he also guides their co-ed a capella efforts.

Returning to the Wick Festival stage were groups from Roxbury Latin and Middlesex. The Latonics of Roxbury Latin impressed the audience, as did Bateman's Bullfrogs and the MXolydians. The latter two groups then combined as the Middlesex Small Chorus. Also back to entertain the Wick Festival audience were the Nobleonians of Noble & Greenough School.

This time it was a female a capella group from Hamilton College—The Tumbling After—which capped the evening. Among the dazzling singers from Hamilton was St. Mark's alumna and honorary Southborough School graduate Kaela Dunne '18.

On each night, after the high school groups had performed and before the collegiate acts went on, all the performers gathered onstage for a Wick Festival tradition: to sing Meredith Wilson's "Lida Rose," a favorite song of the late Myron Wick, St. Mark's Class of 1933.

The Myron A. Wick, Jr. Choral Festival is offered annually in memory of SM alumnus Myron A. Wick '33, and in honor of his lifelong enjoyment of singing. It was established in 1992 through the generosity of the Wick family and friends.

On both nights of the 28th annual Wick Choral Festival, the Class of 1945 Hall was packed and a capella harmonies reigned supreme for close to three hours each evening.

For photos of the Marksmen and the Royal Blues at the 28th annual Wick Festival, click here.

For photos of all the guest groups at the 28th annual Wick Festival, click here.

For photos of the St. Mark's alumni who participated in the 28th annual Wick Festival, click here.