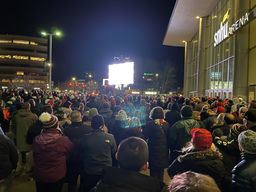 The St. Mark's New Hampshire Primary Club has continued its activities during the 2020 presidential primary season.

Early in February, students attended a rally for Minnesota Senator Amy Klobuchar. Their experience was covered by the MetroWest Daily News. Click here for that story.

More recently, some 25 St. Markers accompanied longtime history department faculty member David Lyons to a rally for President Donald Trump on the campus of Southern New Hampshire State University. While they were unable to enter the arena, they watched the proceedings among a crowd of close to 2000 people outside on a big screen.

In addition to rallies for Klobuchar and Trump, the St. Mark's NH Primary Club has been able to attend events for candidates Andrew Yang, Joe Biden, and Bernie Sanders. This has been a fascinating experience for St. Markers, now on the eve of the first-in-the-nation New Hampshire Primary.