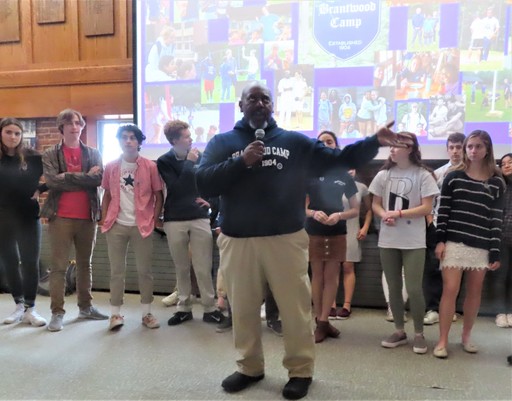 On Wednesday, February 12, Douglas Sutherland, the new executive director of Brantwood Camp, visited St. Mark's. He addressed the St. Mark's community at the all-school meeting that morning, and he made himself available for questions and conversation at lunch.

Brantwood is a summer camp in southern New Hampshire, originally founded in 1904. In 1920, St. Mark's began its involvement with Brantwood, and for the past 100 years, more than 1,200 St. Markers have spent time up at Brantwood as volunteer counselors, working primarily with low income and/or inner-city youth from the Northeast. Many St. Markers have gone on to become members of the camp's permanent staff, while more than two dozen have served as director, associate director, or assistant director at Brantwood Camp over the years.

Brantwood campers engage in athletic competition; work on achievement "challenges" involving first aid, swimming, and other aspects of camp life; and prepare their cabins—called "shacks" in the Brantwood tradition—for daily inspection. Spirit and collaborative teamwork are important parts of the overall experience, and campers are active on ropes course elements and enjoy hikes, visits to Brantwood's property on Silver Lake in Nelson, New Hampshire, and enthusiastic singing at campfire gatherings each evening. The Five Brantwood Ideals—Honesty, Loyalty, Cooperation, Good Sportsmanship, and Unselfishness—are emphasized throughout. St. Mark's students are among those serving as counselors, energizing their leadership skills at the camp.

On Wednesday, St. Mark's staffer Nick Noble '76—former Brantwood director and current Brantwood Trustee—introduced Mr. Sutherland and the 10 current St. Mark's students who have worked as Brantwood volunteers. Mr. Sutherland spoke about the camp and his belief in the strength and importance of its relationship with the School. He invited St. Markers to volunteer at Brantwood this coming summer. Two VI Formers—Nathaniel King and Catherine Pellini—then encouraged their fellow St. Markers to become involved at Brantwood. Both Pellini and King spent portions of the past two summers as Brantwood volunteers. Other current St. Mark's students who have volunteered as Brantwood counselors are Preston Dotson '21, Alie Hyland '20, Samantha Leslie '20, Mateo Macri '21, Jeremiah Ojeah '21, Will Osborne '20, Reily Scott '21, and Sarah Winters '21. All wore St. Mark's-Brantwood Vision 2020 buttons, celebrating a century of connection and collaboration between the two institutions.

At lunch, Mr. Sutherland, Mr. Noble, and Rev. Talcott sat down with St. Markers to talk about Brantwood. In addition to Mr. Noble, St. Mark's Chaplain Barbara Talcott and Head of School John C. Warren '74 serve on the Brantwood Board from the School. Mr. Noble is also the camp historian, having written two books about Brantwood. Additionally, nine other SM alumni/ae are Brantwood trustees. Heading into his eighth summer as a full-time member of the permanent staff at Brantwood Camp is SM alumnus Max Hinkley '15.

The Brantwood facility is certainly familiar to younger St. Markers. In each of the last three years, the entire III Form spent five days at the camp as part of Lion Term. This coming May, the current III Form will travel up to Brantwood for an important part of their Lion Term experience.

Current St. Markers interested in serving as volunteer Brantwood counselors for a sixteen-day session this summer should see Rev. Talcott for application materials. You must be sixteen or older by June 1 to apply.

Today, both Brantwood for Boys and Brantwood for Girls are thriving successfully on the slopes of North Pack Mountain in New Hampshire, exemplifying the spirit of service to others that has been the hallmark of St. Mark's School for almost a century-and-a-half.