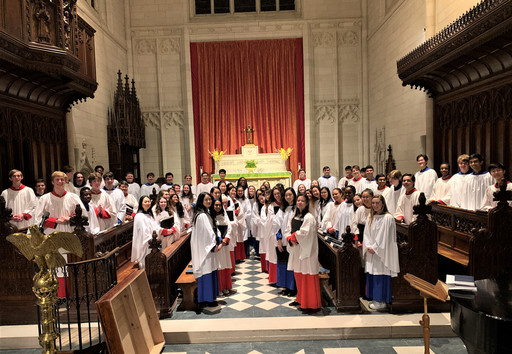 Together, the two choirs performed the Magnificat and Nunc Dimittis in B Flat by Charles Villiers Stanford (1852-1924) and Evening Hymn by H. Balfour Gardiner (1877-1950). Anglican Chant by Charles Macpherson (1870-1927) was the setting used for the Psalm, and the Invitatory, Prayers, and Responses were sung to settings by Richard Ayleward (1626-1669).

James Wallace, director of music and head of the Arts department at St. Mark's directed the St. Mark's choir. The Groton choir was led by that school's choral director, Dan Moriarty, holder of Groton's Harold I. Pratt Chair in Music.

The next night, on Monday, February 24, the same music was repeated for the St. Mark's community by Mr. Wallace's choir at the monthly evening service in Belmont Chapel.