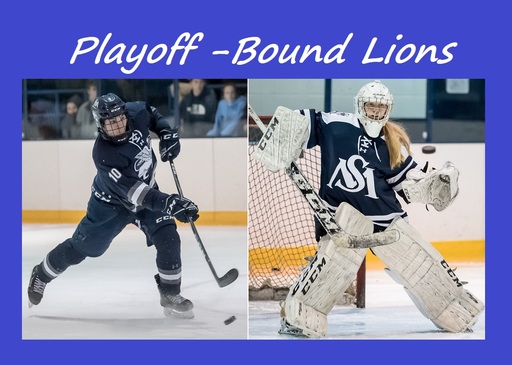 Boys' varsity hockey's dramatic 5-4 win over Groton gave the Lions its best-ever regular season 22 victories and the championship of the Independent School League's Eberhart Division: St. Mark's 29th league title in the 120-year history of the sport at the School. At 22-4-2 on the regular season, averaging 4.92 goals scored per game and allowing 2.57 per game with three shutouts, the Lions are seeded first in the Piatelli/Simmons (small school) NEPSAC tournament. St. Mark's will host 8th seed Pomfret in the first round on Wednesday, March 4, AT THE NEW ENGLAND SPORTS CENTER IN MARLBORO. Pomfret is 15-8-3 on the season (scoring 3.96 gpg and allowing 2.69 gpg with a single shutout). The game starts at 6:15 p.m.

Girls' varsity hockey blanked Groton 5-0 to end its regular season campaign at 14-10-2. Defense has been the key to the Lions' success this year. While they are averaging 2.5 goals scored per game, they are giving up only 1.88 per game and have seven shutouts. The St. Mark's girls are seeded third in the Dorothy Howard (small school) NEPSAC tournament (the Lions' first post-season berth in 22 years). They will host 6th seed Cushing Academy on Wednesday, March 4, AT THE NEW ENGLAND SPORTS CENTER IN MARLBORO. Cushing is 17-14-2 this winter (averaging 3.42 goals per game and allowing 3.39, with three shutouts). The game starts at 4:00 p.m.