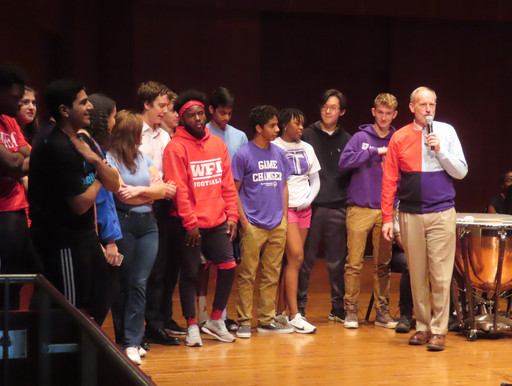 The 2020 St. Mark's Quad Games kicked off on Monday, March 2, with an all-school lunch. Students and faculty were seated by teams, as teams Large, Phoenix, and Thayer get ready to attempt to topple defending champion Fearing. Lunch was followed by an official opening in the Putnam Family Art Center's Class of 1945 Hall. following a performance by the St. Mark's Orchestral. Head of School John C. Warren '74 declared the 2020 Quad Games underway, and the very first event-- the paper airplane competition-- was won by Team Phoenix.

Established in 2014, the Quad Games marked the return to an old St. Mark's tradition, long abandoned and now revived, albeit with a new take for the modern era. As far back as 1898, the student body at St. Mark's had been divided up into intramural clubs—at first just two, known as Brotherhood and Fearing. They would compete with each other for points in a schoolwide intramural tennis tournament in the fall and a schoolwide intramural track meet in the spring, as well as in games between club teams in football and baseball. In 1921, to accommodate a growing enrollment, a third club—Thayer, named after Headmaster William Greenough Thayer—was added, and over the years club competition was added in hockey, squash, and on occasion both cloisterball and Fives. In later years, points were also awarded to teams for members earning varsity letters and for competitive participation in a number of other events and activities. By 1995, however, the St. Mark's intramural club competition had ended, with Brotherhood having won laurels for a given year 31 times (with three ties), Fearing with 21 victories (also three ties), and Thayer 21 winning years (with two ties).

Almost 30 years after the last intramural club competition, Dean of Students David Vachris decided to revive the tradition. In the interim, there had been House competitions between dormitories for points, but there was an unfair unevenness to that system. So four teams were created. Two of them—Team Fearing and Team Thayer—bore the names of those earlier clubs. New to St. Mark's were Team Large—named after longtime St. Mark's Senior Master (and current football and baseball assistant coach) Henry Large; and Team Phoenix—named in honor of the Southborough School for Girls, which coordinated with St. Mark's for five years in the 1970s and had as its symbol the Phoenix rising through the flames. These four teams now compete annually in the new Quad Games at St. Mark's.

It is now a weeklong event, with the entire St. Mark's community competing in a variety of games and activities to see which team can amass the most points. Students and faculty really get into the spirit of the occasion, making posters and banners for the event, and rallying enthusiastically in support of each other and the School. Cageball, basketball, chess, indoor soccer, cook-offs, checkers, dodgeball, cloisterball, spelling bees, tug-of-war, broom ball, rock-paper-scissors, volleyball, name that tune, hold 'em poker, poetry, coloring, table tennis, egg-tossing and more highlight the week. Points are awarded not just for winning, but for attendance at optional school events and performances, and for spirit and sportsmanship, as determined by a panel of roving faculty judges. The Quad Games are a central component of the School's residential life program during the winter term.

Teams Large, Fearing, and Thayer won the first three Quad Games, before Phoenix, with its rallying cry "We Will Rise!" took back-to-back laurels in 2017 and 2018. Fearing, the oldest of the current Quad Game teams, earned its second Quad Games championship in 2019.