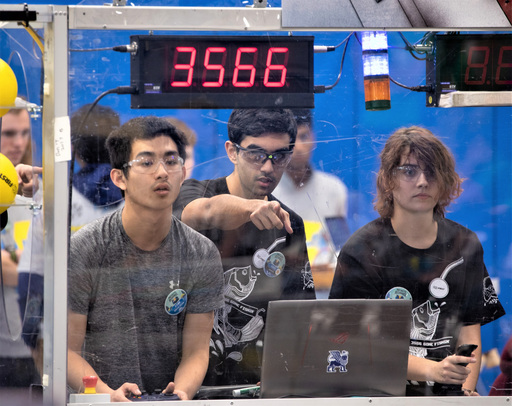 The St. Markers did very well in the opening round-robin phase of the competition. They managed to defeat last year's gold medalists—Mechanical Mayhem, a team of homeschoolers from Southern New Hampshire—and went 8-4 overall, ending up ranked 10th out of 40 teams going into the alliance round.

St. Mark's was chosen to captain the seventh seed contingent in the allied tournament, and in the quarterfinals they defeated the Outliers—perennial champions from Baxter Academy for Technology and Science in Portland, Maine—before losing by just a couple of points in the semifinal round to the top-seeded Alliance 3 team.

At the closing ceremony, the St. Mark's team was presented with the Innovation and Control Award, sponsored by Rockwell Automation. The award recognizes an innovative control system or application of control components to provide unique machine functions. The judges felt that St. Mark's use of a multi-camera control system was truly impressive. "They (St. Mark's) visualized their way to success," the judges declared.

This was an auspicious start for the 2020 St. Mark's robotics program. Currently ranked 14th out of 213 teams in New England, Gone Fishin' #3566 will continue to pursue competition at the New England District event in Waterbury, Connecticut from March 6 through March 8.