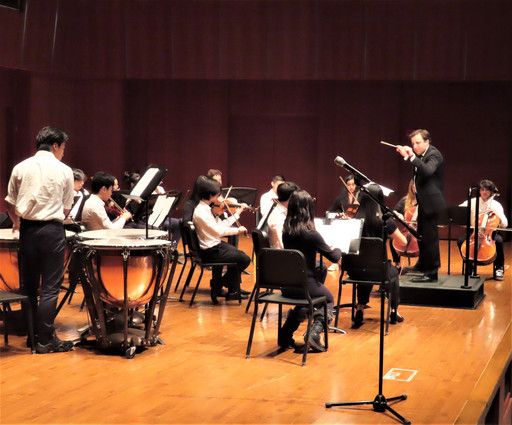 On Monday, March 2, the St. Mark's School Orchestra, conducted by director Nathaniel Meyer, performed a concert for the entire School community in the Putnam Family Arts Center's Class of 1945 Hall.

After an introduction by Arts department head and Director of Music James Wallace, the concert opened with the first movement of Capriccio Espagnol, Op. 34, by Nikolai Rimsky-Korsakov (1844-1908). This was followed by the overture from The Beautiful Galatea by Franz von Suppé (1819-1895) and the famous "Unfinished Symphony"—Symphony No. 8 in D Minor—by Franz Schubert (1797-1828).

Mr. Meyer then introduced The Blue Danube Waltz by Johann Strauss II (1825-1899) and encouraged ballroom dancing. Rumor has it that there were indeed some dancers in the back of the auditorium during the St. Mark's orchestra's rendition. The only modern piece of the afternoon—the theme from the 1981 film Chariots of Fire, composed by Evángelos Odysséas Papathanassíou (Vangelis, b. 1943)—was then performed.

The concert concluded with a rousing rendition of the climactic movement from the overture to William Tell by Gioachino Antonio Rossini (1792-1868). It was the perfect way to segue into the official opening of the 2020 Quad Games.

The St. Mark's orchestra was re-established in 2014 by combining the School's string and wind groups. The orchestra performs major concerts for the school and public, and also does one run-out concert to a retirement community each year.

Director Nathaniel Meyer is a Boston native who began his musical career as an award-winning trumpeter. He attended Yale and has studied conducting both in the U.S. and abroad. He was the winner of the inaugural Vincent C. LaGuardia Conducting competition and was a finalist and prizewinner of the American Prize in Conducting. In addition to directing the St. Mark's orchestra, Meyer is also conductor of the Boston area Belmont Festival Orchestra and the DuBois Orchestra at Harvard.