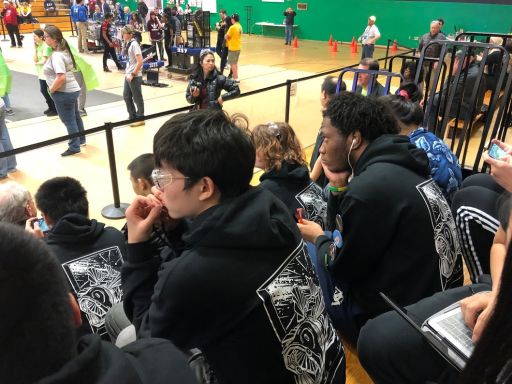 With an overall record of 22-14-0 so far in 2020, the St. Mark's robotics team is ranked second in New England with 86 total points in the region's FIRST Robotics standings.

The Lions, ranked 11th in New England going into the event, roared through the first round, making it into the quarterfinals while teamed with the Pomfret School and Milford, Connecticut in Alliance 2. In the quarterfinals, the St. Mark's alliance dominated three Connecticut teams (Nonnewaug High School from Woodbury, Mercy High School from Middletown, and Granby Memorial from Granby). In the semifinals, Alliance 2 was equally impressive, beating two more Connecticut schools (Wolcott High School and Xavier from Middletown) and a talented contingent from Massachusetts' Agawam Senior High.

In the finals, St. Mark's and Alliance 2 faced off against Alliance 1, featuring Connecticut teams from South Windsor, Windsor Locks, and Redding. The action was fast and furious, close and competitive. In the end, St. Mark's and its two allies came in second for the silver medal.