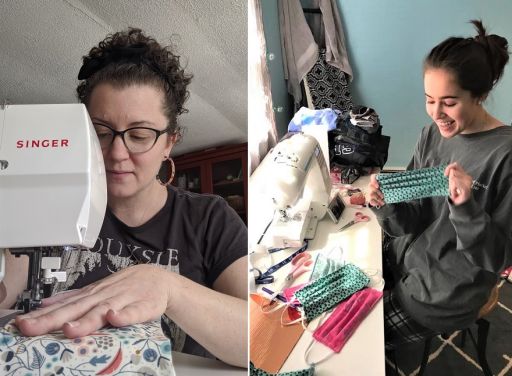 Members of the St. Mark's Community Making a Difference
Mar 25 2020

While remaining at home like so many others during these challenging weeks, some members of the St. Mark's community are using their time to help make a difference. Two from St. Mark's—a student and a staff member—are among those making face masks to help address the shortage of those essential items, supporting the needs of health care workers and medical facilities. 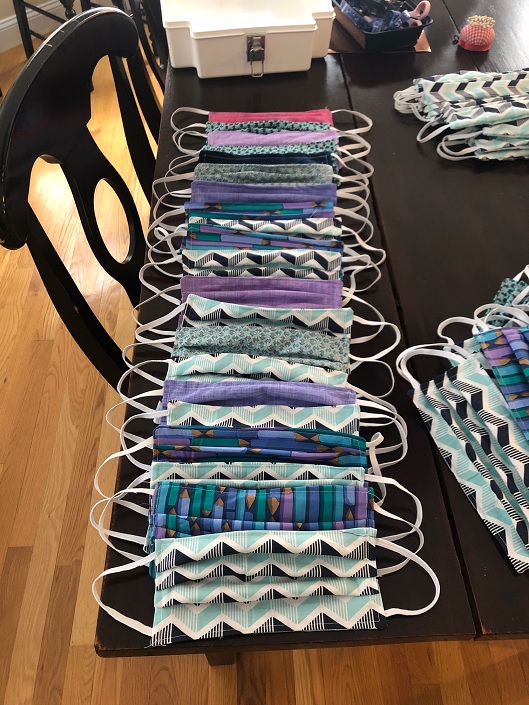 "I was just sitting around at home, with nothing to do," said Ames Scott '23, when her mother called her attention to the Emerson Hospital website. "They said they were running out of masks and were asking for help," Ames explained.

"I took sewing lessons in middle school," she continued. "I was in the sixth grade. I had gone to a friend's house and she was wearing this really nice dress. I complimented it and she said she had sewn it herself. I thought that was pretty cool. She told me who had taught her, a woman named Martha, and so my Mom arranged for Martha to come to our house and teach me." Now, three years later, here was an opportunity to put those skills to productive use. "The Emerson website had a tutorial on how to make the masks," she said. So she got to work.

Ames had plenty of fabric left over from her sixth- and seventh-grade sewing experience. She set a goal of making 100 masks. She soon ran out of the quarter-inch elastic needed to hold the masks in place. When she discovered that there was no more quarter-inch elastic to be found anywhere, she bought one-inch elastic and carefully cut each strip into fourths. "That took time," she said, "but pinning the fabric to make each mask was the most time-consuming part of the process." By March 25 she had completed 50 masks: halfway to her goal.

The intrepid III Former from Concord, Mass., is the daughter of St. Markers—Alys Reynders Scott '85 and George Scott '84—and with the example of her thoughtful and general response to a national crisis she is carrying on their legacy and the St. Mark's tradition of leadership and service.

Melissa Anderson, associate director of advancement services at St. Mark's, is also making masks. A member of the St. Mark's staff since 2010, Ms. Anderson is also staying at home, in Worcester. "I needed to feel that I was doing something," she said. "Something to give me purpose in the middle of all of this." She had seen posts on social media from Beth Israel Deaconess Medical Center in Boston, and a friend, a nurse at the Lahey Clinic, told her about the shortage of face masks for healthcare workers and sick patients.

"I started looking for local places," explained Anderson. She reached out to the Mutual Aid Worcester Facebook group, and she saw Worcester City Councilor Kate Toomey's plea for folks to make 1000 facemasks for St. Vincent's Hospital. So she got to work.

She began on March 19, collecting material for 50 masks. She, too, ran into the elastic shortage difficulty, and like Ames she began cutting larger elastics into narrower strips. Anderson describes the experience as "more than just a welcome distraction" from solitude and isolation. "It gives me a sense of community, despite the isolation," she declares. "It's so important that we be a part of something that can make a difference."