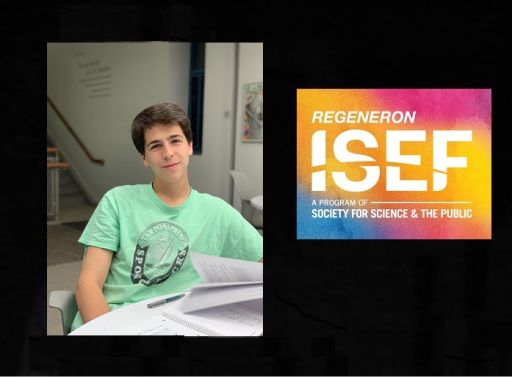 Jack Griffin, a VI Former from Shrewsbury, Massachusetts, has been selected as a delegate to the Society for Science and the Public's 2020 Regeneron International Science and Engineering Fair (ISEF) for his project on polymer science.

Griffin has been researching polymers as part of this year's Taft STEM Fellowship program at St. Mark's. He traveled weekly to UMass-Amherst to work at the university's Center for UMass/Industry Research on Polymers (CUMIRP) laboratory. He researched, synthesized, and observed a material called 'Photo-Actuated Liquid Crystalline Elastomers.' "It's just a fancy term for a polymer that expands and contracts when exposed to light," explained Griffin. "I would create a sample, test it, take notes, and find ways to improve it before going through the cycle again. This process is called the Engineering and Design Cycle, which I learned from Ms. Lohwater and Mr. Loomer. The goal of my testing was to maximize the materials contraction while maintaining its strength because of the material's potential applications."

Jack first became interested in this material while reading about how it could be used in the structure of a solar panel to increase the panel's efficiency. "Think of it like a table," he said, "with this polymer as the table legs and the solar panel on top. As the sun travels its path through the sky, the polymer legs closest to the sun will contract, naturally tilting the solar panel towards the sun, allowing it to catch more sunlight, just like sunflowers do! They already have mechanical systems that can adjust solar panels, but expending energy in order to make more energy feels counterintuitive. This polymer, after further research, could accomplish the same task without using energy. It would only change based on the sunlight. A convenient, sustainable solution."

Despite the possibility that this year's ISEF, originally scheduled for mid-May in Anaheim, California, may not happen, Griffin says that he is " very honored that the ISEF committee chose me. This project has been one of my favorite parts of senior year. I looked forward to visiting the lab at the end of every week in order to try and help create a sustainable solution, rather than just learn about 'being green' or 'saving the Earth.' It's an opportunity that most do not have, certainly not until college, and yet St. Mark's has already provided me with the opportunity to take learning beyond the classroom, where I get to create new knowledge instead of just learning about someone else's discoveries."

Jack's achievement, says St. Mark's Science Department Chair Lindsey Lohwater, "is especially wonderful as it marks the fourth year out of the last five that we have had a Saint Marker selected for ISEF!"