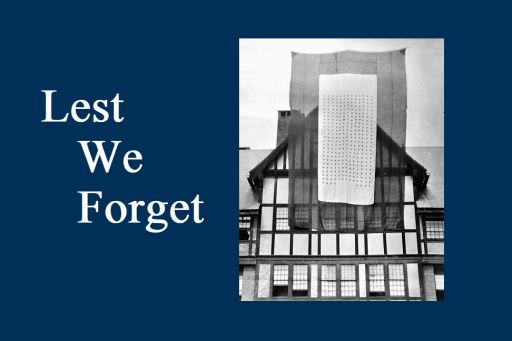 The first St. Mark's graduation ceremony, really a formal Baccalaureate service in Southborough's St. Mark's Episcopal Church where seven young men received diplomas (and none of them would go on to college), was held on Saturday, June 9, 1866. One month before, more than 300 miles to the west and north, in the small town of Waterloo, New York, a community-wide event took place, with businesses closing and the residents decorating the graves of their Civil War dead with flowers and flags. It was the first celebration of what would come to be called Memorial Day.

It was officially established as a holiday, initially called Decoration Day and set at the end of May, in 1868. On May 30 of that year, Major General James A. Garfield (Congressman and later President of the United States) delivered the keynote address for the inaugural tribute in Arlington National Cemetery, where 5,000 participants decorated the graves of 20,000 soldiers.

In attendance at that first St. Mark's graduation service two years earlier was 15-year-old Charles E. Fox, who would go on to attend (and ultimately preside over) many such tributes during a 40-year career as a Naval officer (graduating from the U.S. Naval Academy in 1872, he retired as a Rear Admiral in 1911).

Fox was the first of more than 1,400 St. Markers to serve in the United States military over twelve decades of armed conflicts, with 60 St. Markers and one faculty member losing their lives in wartime service.

The first of those conflicts was the Spanish-American War in 1898. Lieutenant Edward Fox commanded the U.S.S. Morris, an early torpedo boat, and 35 other St. Mark's graduates were also in uniform. Eight St. Markers charged up San Juan Hill with Theodore Roosevelt's Rough Riders. Two alumni died. Sergeant William Tiffany, SM Class of 1886, was wounded in action during the Rough Riders' assault on Kettle Hill, but it was typhoid and yellow fever which killed him and Private Hubbard White, SM Class of 1872, in the aftermath of the fighting: the first from St. Mark's to make the supreme sacrifice. Their names are inscribed on the plaque outside the School's main dining hall.

A total of 499 St. Markers served in the First World War, wearing the uniforms of Great Britain and Canada as well as the United States. A dozen former or future faculty members also served. One alumnus, George McMurtry, SM Class of 1896, who had been barely 20 when he left Harvard to join Colonel Roosevelt's Rough Riders in the previous war, was 40 and a newly re-enlisted Captain in the U.S. Army when he was awarded the Congressional Medal of Honor for "conspicuously by gallantry and intrepidity at the risk of his life above and beyond the call of duty" in the Argonne Forest. Twenty St. Markers gave their lives in 1917 and 1918. Their photographs can be found in the vestibule outside the entrance to the Hinkle Room. The picture at the top of this story shows the St. Mark's Service Banner overlooking Belmont Field in mid-1917: one star for every St. Marker in uniform, with a gold star for each of the fallen. There would be even more stars on the banner before the war's end in November of 1918.

Almost 600 from St. Mark's were in uniform during the Second World War. Stephen Galatti, SM Class of 1906—the first director of the School's alumni office and head coach of the St. Mark's varsity football team for several years—who had supervised the American Field Service ambulance corps in WWI, returned in that role again. Eighteen St. Markers served under him from 1940 through 1945, driving ambulances through combat areas, often under fire, carrying wounded soldiers to safety. One of them was Cameron Burrage '37 who, on the road to Brest in Brittany, crawled through the mud under heavy fire to rescue wounded French soldiers. He was awarded the Croix de Guerre by the French government. When the United States entered the war, Burrage traded his ambulance for the uniform of a U.S. Army artillery officer, and on August 9, 1944, on that same road to Brest, the 24-year-old captain was killed in action within sight of the place where he had won his Croix de Guerre four years before.

Burrage was one of 32 St. Markers who lost their lives in WWII. He fell just two months after nineteen-year-old Private Bulkeley Livermore Wells '42, who was killed after parachuting into Normandy on D-Day, June 6, 1944*. Among the last St. Markers to make the supreme sacrifice in WWII was Lieutenant Robert Taft Whitman '34. An officer aboard the U.S.S. Indianapolis, Whitman went down when the ship was torpedoed and sunk in shark-infested Pacific waters only days after delivering crucial components of the atomic bomb to the island of Tinian. It was a particularly brutal time for the St. Mark's Class of 1936, which lost six of its number—almost 20 percent of the entire class—including two young men who had played significant roles in the history of Brantwood Camp: Warren Winslow and Henry Nichols Ervin. One faculty member, Hale Very, was also killed in the war. Sergeant Very, who taught music at St. Mark's from 1939 to 1941, was on board the British troopship Rohna crossing the Mediterranean when it was destroyed by one the first guided missile attacks, in November of 1943. Photos of all 33 from St. Mark's who died in service during WWII can be seen on the walls of the Hinkle Room.

Close to 100 St. Markers saw military service in the early 1950s, many of them deployed in the Korean War. Four lost their lives during that conflict. Two of them—Bruce Bromley '44 and Douglas Bradlee '46—were each posthumously awarded the Silver Star for gallantry in action. Photos of all four, along with the School's only Vietnam casualty, hang in the Hinkle Room lobby. Among the more than 50 St. Markers in uniform during the Vietnam War was David Webster '47. One of the first St. Mark's day students and veteran of the Korean conflict, Webster was a Marine Corps helicopter pilot based at Da Nang. In March of 1963, Major Webster set out on a mission to rescue the crew of an Army helicopter shot down near Quang Ngai, and he was killed when his own chopper went down under fire.

Since Vietnam, only one St. Marker has been numbered among the fallen. In the summer of 1992, Navy aviator Tristram Farmer '84, a veteran of Operation Provide Comfort, was aboard the carrier U.S.S. John F. Kennedy. Having participated in Operation Desert Shield and Desert Storm, the Kennedy was on its way to a deployment to another hotspot, Bosnia, when Lt. Farmer's plane crashed in the Atlantic. His portrait, along with the flag that was flown over the Pentagon in Farmer's memory, hangs on the wall to the left of the Hinkle Room fireplace.

In 1920, St. Mark's Belmont Chapel was renovated and expanded as a memorial to those who served in the First World War. Since then the names of all the fallen have been inscribed on plaques to either side of the altar. This Memorial Day week we remember those 61 from St. Mark's who have made that supreme sacrifice, and we continue to honor that memory—lest we forget.

*Wells is buried in the Normandy American Cemetery at Colleville-sur-Mer, France: plot E, row 18, grave 19. He has twice been visited by St. Mark's students over the past few years.