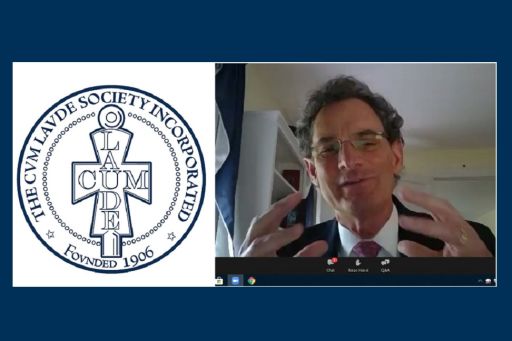 Mr. Umiker opened with a passage from St. Paul's Epistle to the Philippians. He then used the metaphor of teaching a child to ride a bicycle to talk about letting the young take off in their lives. Describing his growing up in a time of racial discord and even pandemic in the late 60s and early 70s—in the words of musician Gil Scott Heron: "Winter in America"—he compared then to now. He urged students to hold on to moral and ethical measures of greatness. "Housing, food, health, education, and justice," he said, "these are the things that are true, honorable, just, pure, loving, and commendable." This gives us "hope over fear and unity over division." He concluded by saying "We can and must do better by caring for each other" and he recognized the unique opportunity inherent in an "intentionally small" St. Mark's community. He also reminded his listeners that humor and laughter also have an important place in our lives, no matter the challenges.