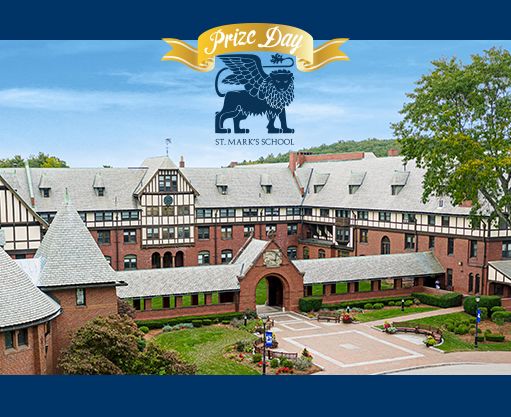 Head of School John C. Warren '74 welcomed the audience before the first prizes were awarded.

HENRY NICHOLS ERVIN '36 PRIZES – given to a member of the lower teams whose play has been characterized by both cooperation and consideration for others.

DALE FABYAN MEMORIAL FUND PRIZES – For athletic equipment, to one or more deserving III and IV Formers, who in the opinion of the coaches has demonstrated , through hard play, co-operation and good sportsmanship, those qualities of a happy student life as exemplified by Dale Fabyan '61.

MANAGER OF THE YEAR – for the best student manager at the varsity level.

ISL AWARD OF EXCELLENCE – The Independent School League award is presented by each of the 16 schools to a deserving VI Form female and male who embraced the league's ideals of unquestionable integrity, sportsmanship and fair play while having participated as a multi-sport athlete throughout their career at St. Mark's.

WILLIAM T. WHITE PRIZES – To those young men and women in the VI Form, excluding the captains, judged by the coaches and captains of all varsity sports, to have made a particular contribution to the success of the season because of their enthusiasm, determination and unselfishness in any varsity sport.

PETER M. COY PRIZES – To that VI Form male and female athlete who has shown, in more than one varsity sport, surpassing intensity and determination, whose exceptional conditioning and physical courage, whose desire to excel regardless of injury or adversity and whose tenacious devotion to the success of his or her teams exemplify the spirit and joy of competition.

THE GEORGE HOWELL KIDDER FACULTY PRIZE, established by his children at the time of Mr. Kidder's retirement from the Board of Trustees. This prize is awarded by the Head of School to a member of the faculty who has contributed to St. Mark's above and beyond the ordinary and who has shown the same love of learning, compassion and commitment to excellence which marked George Howell Kidder's life.

THE CLASS OF 1961 FREDERICK M. BURR STAFF PRIZE, established by the Class of 1961 on the occasion of their 40th reunion to honor one of their teachers, Fred Burr, and his emphasis on the contribution of staff to the quality of the education provided by St. Mark's. Fred Burr considered himself one—like so many staff members—who enthusiastically supported the work of adults and students while working outside the limelight. The Burr Prize is awarded annually by the Head of School to a member of the staff who demonstrates extraordinary support of the work of St. Mark's adults and students, the approach the Class of 1961 sought to honor.

THE JOHN A. CAREY PRIZE is given in recognition of and appreciation for the 36 years of loving service John Carey gave to this School. It is given to that student who has contributed the most to the visual arts at St. Mark's and who has excelled in more than one art form.

THE CARLETON BURR RAND PRIZE is given in memory of Carleton Burr Rand, Class of 1946, and is awarded for excellence in journalism.

THE COLEMAN PRIZE IN ENGLISH is awarded to that student, who, in the judgment of the English Department, has submitted the outstanding essay during this academic year.

THE WILLIAM OTIS SMITH PRIZE FOR ENGLISH VERSE is given in memory of a member of the Class of 1907 and is awarded to that student, who, in the judgment of the English Department, has submitted the outstanding verse during the past year.

THE REDMOND PRIZE FOR ENGLISH NARRATIVE is awarded to the student, who, in the judgment of the English Department, has submitted the outstanding piece of narrative during this academic year.

THE FREDERICK A. CAMMANN '47 MUSIC PRIZE is awarded to that student who demonstrates the most talent in musical theory and composition.

THE J. STANLEY SHEPPARD MUSIC PRIZE is given in recognition of Stan Sheppard's 34 years of faculty service to the music program at St. Mark's and is awarded to that student who has contributed the most to the musical life of the School during the current year.

THE WALTER IRVING BADGER PRIZE IN DRAMATICS is given in memory of Walter Badger's 13years of service to the St. Mark's drama program and is awarded to the member of the VI Form who, during his or her St. Mark's career, has contributed the most to drama at the School.

THE FREDERICK R. AVIS AND ANNA M. PLISCZ SCIENCE PRIZES honor two revered St. Mark's biology teachers whose love of teaching and learning set examples for both colleagues and students. The Avis-Pliscz Science prize is awarded to a student who, through curiosity, determination, passion and practical application of ideas have acquired a deeper understanding of particular scientific processes.

THE PHILIP GALLATIN CAMMANN '14 STEM PRIZE is awarded to that student who has most successfully pursued breadth and depth of study in Science, Technology, Engineering and Math courses.

THE EDWARD A. TAFT '69 COMPUTER SCIENCE PRIZE is awarded to that student who by interest, curiosity, original thought, and practical application of ideas has acquired a deeper understanding of the field of computer science.

THE JOHN SUYDAM MATHEMATICS PRIZE is given in memory of a member of the Class of 1904 who taught mathematics at St. Mark's for many years. It is awarded to that Sixth Former who has done the best work in mathematics, having also studied physics.

THE ROY IRVING MURRAY PRIZE FOR EXCELLENCE IN SACRED STUDIES is given in memory of a St. Mark's chaplain in the 1920s and 1930s.

THE H. CASIMIR DE RHAM PRIZE FOR EXCELLENCE IN FRENCH is given in honor of a member of the Class of 1914.

THE JOHN RICHARD WHITE PRIZE FOR EXCELLENCE IN GERMAN is given in memory of a member of the Class of 1899 who also taught German here.

THE PETER BRYCE APPLETON PRIZE FOR EXCELLENCE IN SPANISH was given by Francis Appleton, of the Class of 1935, in honor of Peter Bryce Appleton, a member of the class of 1961.

THE CHINESE LANGUAGE PRIZE is awarded to a student who has demonstrated extraordinary aptitude and passion for the study of Chinese during his or her career at St. Mark's.

THE HENRY P. KIDDER PRIZE FOR EXCELLENCE IN LATIN is given in memory of a member of the Class of 1914. Henry Kidder is also the grandson of the founder of St. Mark's School.

THE MORRIS H. MORGAN PRIZE FOR EXCELLENCE IN GREEK is given in memory of a member of the Class of 1877 and for many years a professor of Greek at Harvard.

THE FREDERIC A. FLICHTNER PRIZE FOR EXCELLENCE IN HISTORY is given in memory of a member of the faculty for 35 years.

THE GEORGE HALL BURNETT PRIZE IN HISTORY is given to commemorate the graduation in 1902 of a grandson of the founder. It is awarded on the basis of a special essay in American History

THE ELY PRIZE IN PUBLIC SPEAKING was originally given by a member of the Class of 1892, and is presented to the student who gave the best speech in the Global Seminar Public Speaking Competition.

THE WILLIAM G. THAYER SCHOLARSHIP FUND PRIZES were established by the alumni to honor the Thayers' first twenty-five years of service to St. Mark's. It is awarded each year to those students in each form with the highest academic average for the year.

THE DR. AND MRS. WILLIAM THAYER SCHOLARSHIP is awarded to the student, not in the graduating class, with the highest academic standing in the School.

THE BRANTWOOD PRIZE celebrates the strong bond that has existed for close to a century between St. Mark's School and Brantwood Camp. This prize is awarded each year to the St. Markers who have done the most for Brantwood.

THE HEAD MONITOR PRIZE, is presented to the male and female Head Monitor in recognition of exemplary devoted service to St. Mark's. Both in their public roles and behind the scenes they have been outstanding leaders. The gift of these gavels honors everything our Head Monitors have given to St. Mark's in this role.

THE JOHN AND ELIZABETH MUNROE PRIZE, first given in 1949 in memory of a member of the Class of 1902, was renamed in 1990 to include his wife, a distinguished and inspiring figure in the field of social work. The prize is awarded each year, by vote of the faculty, to the underformer who has shown the greatest promise of intellectual leadership and who by his or her example has best fulfilled the ideals of St. Mark's School.

THE ASSOCIATION OF ST. MARK'S SCHOOL PRIZE is awarded by vote of the faculty to that Sixth Former who best represents the ideals of St. Mark's School and who, through his or her service to the broader community beyond the St. Mark's campus, enriches both his or her own life and the life of the greater School.

THE CHARLES WILLARD BIGELOW PRIZE is given in memory of a member of the Class of 1891. It is awarded for promise of character by vote of the faculty to the Fifth Former who, throughout his or her St. Mark's career, has shown unusual determination in all his or her undertakings and who has continuously been willing to go beyond the call of duty to get the job done.

THE HENRY NICHOLS ERVIN SCHOLARSHIP is named for a member of the Class of 1936 who was killed in World War II. It is awarded by vote of the faculty to that student who best exemplifies the character of Henry Ervin who, while at St. Mark's, at Brantwood, at Harvard, and in service to his country, seldom missed an opportunity to do a kindness or lend a hand.

THE PIERSON F. MELCHER PRIZE is given in honor of the founding Headmaster of the Southborough School and is awarded by the St. Mark's faculty "to that girl who through clarity of expression, effectiveness of logic, and sense of community well-being best exemplifies the tradition and spirit of the New England town meeting".

THE DOUGLAS H. T. BRADLEE SCHOLARSHIP is named for a member of the Class of 1946 who was killed in the Korean War. It is awarded by vote of the faculty to that student who best exemplifies the qualities of Douglas Bradlee. In the words of his Headmaster, what was special "was not so much (Douglas Bradlee's) keen mind or his frankness or his...physical courage or even his firm forthright moral courage; it was his spiritual strength."

THE DANIEL B. FEARING ATHLETIC PRIZES are awarded to the boy and girl who best combine athletic ability with good spirit, good team play, and sportsmanship. The prize was established to reward both the winners' contribution to the success of their teams and their wholesome and positive effect on the athletic life of the School.

THE HAROLD HAYES PRIZE, named for a member of the Class of 1907, is awarded by vote of the faculty to the member of the graduating class who has been of greatest service to the School.

THE ST. MARK'S PRIZE FOR EXPERIENTIAL LEARNING selected, by vote of the faculty, goes to that VI Former who has demonstrated, through action and reflection, a particular passion for applying knowledge gained in St. Mark's classrooms to challenges existing in the larger world beyond our campus.

THE WILLIAM TOWNSEND WHITE SCHOLARSHIP is named for a member of the Class of 1886. It is awarded by vote of the faculty to a deserving student based upon academic achievement.

Congratulations to all the prize recipients!