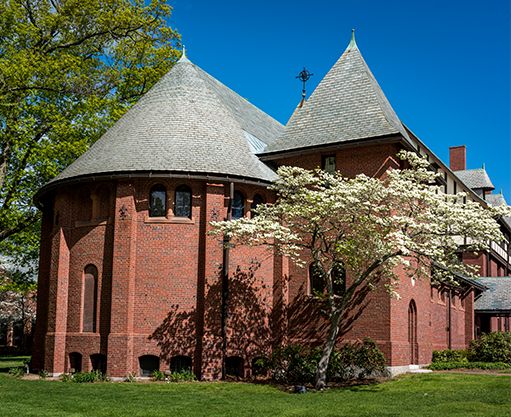 The School's head chaplain—the Rev. Barbara Talcott—and associate chaplain—the Rev. Katie Solter—presided over the service. A musical prelude from director of music James Wallace and the hymn "For the Splendor of Creation" began the ceremony, followed by a welcoming salutation and opening Collect.

After welcoming everyone to a virtual Belmont Chapel, Rev. Talcott held up a copy of the St. Mark's Chapel prayer book and told the Class of 2020 that the School would be giving each of them a copy: "a little bit of Belmont Chapel for you." She also said that Belmont Chapel would always be there for them, ready to give them a happy welcome with open arms. She then offered a prayer for the class.

As in the past, there were scripture passages in different languages read by St. Mark's VI Formers: Lora Xie (from Deuteronomy, in Hebrew), Illia Rebechar (from Ecclesiastes, in Greek), and Emily Taylor (from Philippians, in Latin).

Ms. Adams then delivered the traditional Baccalaureate address. "In the midst of all of this," she said to the Class of 2020, "you were called for a time such as this." She used the words of St. Teresa, James Baldwin, and Jill Scott to fashion "a swan song in three movements" – grace, action, and love. "Grace is rooted within you," she said. She praised students for caring for each other. "That, more than any building," she said, "is St. Mark's. And you are St, Mark's." She went on to tell the VI Formers: "Don't ever put limitations on yourself as an individual, and certainly not as a community." Community, she said, is the strength of St. Mark's intentionally small boarding community. "You can't pick up your ball and go home, because the person you are wrestling with is on your team, is in your dorm; you see them in the dining hall; you pass them in the hallways. . . this is a really good recipe for finding ways to be in community with each other. Showing up is love in action. And you do that so well." She concluded by declaring that "You are connected, you are powerful, you are amazing, and you are loved."

An anthem—Christopher Tin's "Baba Yehu"— from "the St. Mark's virtual choir, through the miracle of technology" continued the service, followed by prayers and reflections, again from VI Formers reading in different languages: Becca Porter (the Lord's Prayer in Italian), Jenny Tanh (a prayer of Thanksgiving in French), Emma Viens (in German, from a poem by Ranier Maria Rilke), Helen Huang (a Taoist prayer in Chinese), and Will Bundy (in Spanish, from a poem by Antonio Machado.

A Collect for Graduation, the School Prayer (led by Head of School John C. Warren '74), the School Hymn, a benediction, and an organ postlude concluded the service.

The Baccalaureate Service is the oldest end-of-year tradition at the School. The first was held in June of 1866 and doubled as a commencement ceremony the School's very first graduates. Indeed, from 1866 through 1876, the first eleven graduation ceremonies were simply part of a traditional Baccalaureate liturgy, all held in Southborough's St. Mark's Episcopal Church, as there was no chapel on the School's first campus.

There is a chapel today, of course: Belmont Chapel: first opened in 1890 and pictured above. This year's 2020 chapel may have been virtual in reality, but in spirit it was again an annual offering of community from Belmont Chapel, continuing the tradition of the St. Mark's family.