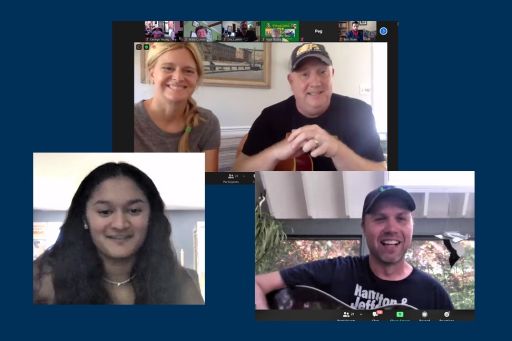 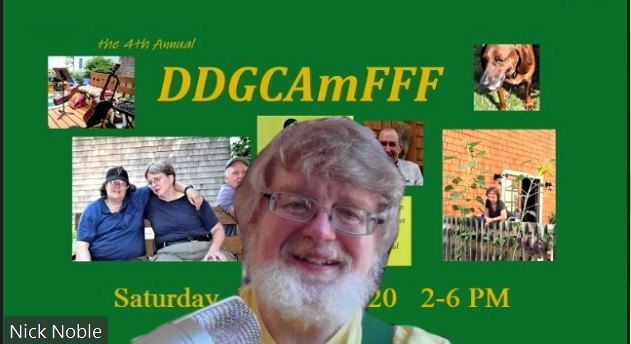 Originally established in 2017 by St. Mark's staffer and alumnus Nick Noble '76 (left) and Southborough School alumna Mary Currier '76, for three summers it was a six-to-seven hour live event held on Currier's porch at Callender Avenue in Newport, Rhode Island. With COVID-19, a live festival was impossible in 2020. Thanks to St. Mark's School providing its Zoom license for the event and the guidance of St. Mark's technical facilitator Ron Boston, the fourth annual DDGCAmFFF was able to happen as a virtual event. 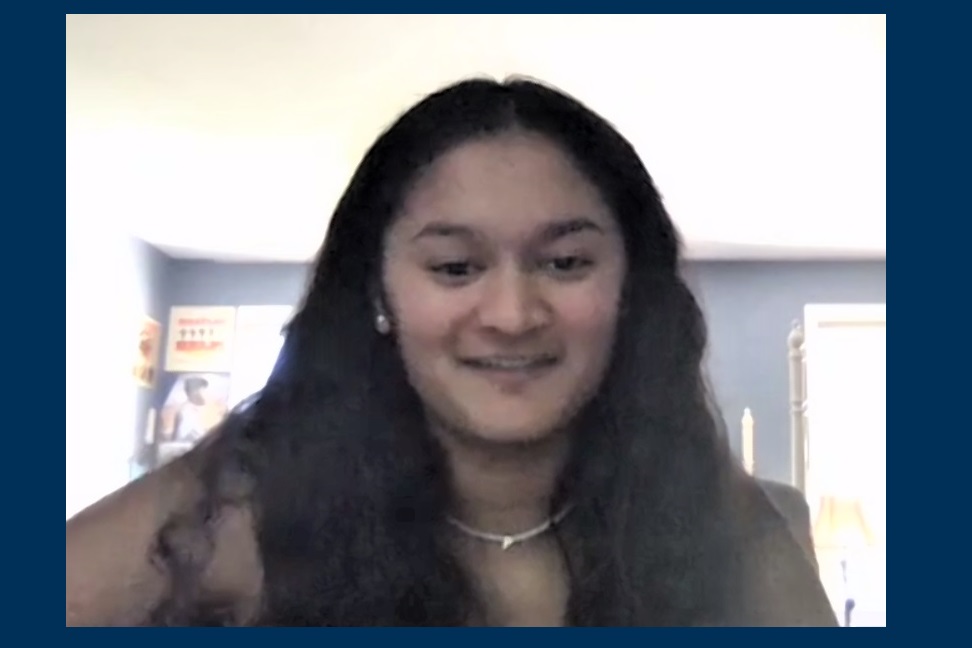 Among the performers was Padma Mynampaty '22 (right), a rising V Form day student from Southborough. A talented singer-songwriter, Padma shared two original songs—"Evermore" and "Currents"—singing and playing the guitar from home. Two St. Mark's faculty members— Jason Eslick (veteran English teacher) and Sarah Eslick (associate director of the School's Center for Innovation in Teaching and Learning) are also the husband-and-wife folk duo Old Horse (below left). From Cape Cod, they performed "Colorado Moon," a Jason Eslick original. Another faculty member, Chris Kent (below right), director of the St. Mark's theater program, is a fine singer-songwriter as well. Following a picnic outing with his family in Maine, he joined the Zoom festival to present two of his own songs: "Red Bird" and "I Miss the Mountains."

Others with St. Mark's connections performing at the festival were former faculty member Chuck Greene (two original songs: the COVID-themed "TP and Holy Water" and the powerfully topical "Burn it Down") and Casey Cole, daughter of alumnus Rick Cole '74, who sang covers of songs by Katy Perry and Ben Folds, accompanying herself on the ukulele.

Mary Currier (at left), Southborough School Class of 1976, co-founder and co-host of the event, sang the traditional sea chanty "Hello, Somebody" from her Callender Avenue home in Newport, overlooking the real Do Do's Garden. Co-host and master-of-ceremonies Nick Noble, St. Mark's and Southborough School Class of 1976, performed Steve Earle's "Jerusalem" and later closed out the festival with "As I Ride By Away," a song written by John M. Kernochan, Class of 1937. Noble is also the host of the weekly FOLK REVIVAL program on WICN (Worcester Public Radio).

A handful of St. Mark's and Southborough School grads, families, and former staffers also tuned in. In addition to the performers with St. Mark's connections, 15 other acts were on the bill, representing practically every New England state and with one folk duo appearing remotely from Illinois. The festival's third co-founder and co-host, George Young, St. George's Class of 1976, captured screen shots of each performance.

During an unprecedented time of quarantine and isolation, being able to gather remotely in song is a treasured opportunity.

To check out the entire fourth annual DDGCAmFFF, including all the St. Mark's performances, click here.