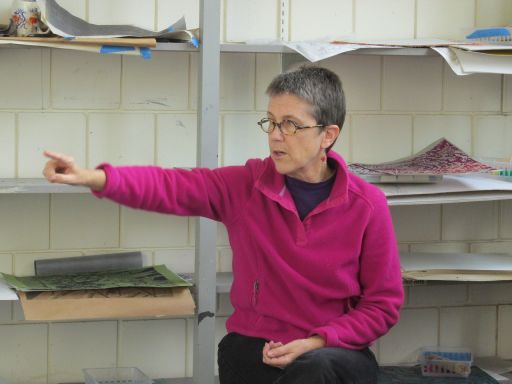 This fall, veteran art teacher Barbara Putnam—entering her 42nd year on the St. Mark's faculty—assumes the mantle of Senior Teacher. This is an historic transition for the School, as Ms. Putnam will be the first woman to hold that title in the 150-plus-year history of St. Mark's.

Putnam is an internationally renowned artist, whose work appears in the collections of Finland's Jyväsklyä Museum of Art; Hanoi's National Museum of Fine Art; Portugal's Museu do Douro in Peso de Règua; and in museums libraries, and foundations in twenty different U.S. cities. She has exhibited and participated in art programs around the world in Romania, Finland, Portugal, Argentina, Japan, Canada, China, and the Netherlands, and in more than two dozen cities and towns across the United States. She was Coastal Studies Artist-in-Residence at Maine's Bowdoin College in 2012-2013 and twice Artist-in-Residence at the Delta Wetlands and Waterfowl Foundation in Manitoba, Canada. Her abiding interest and involvement in the connection between art and science played an important part in both ventures. At St. Mark's she has worked to make her Studio I class link with STEM so that students can see how close observation works in both art and science. Each year her classes research an ocean topic, applying developing skills to a real-world problem with scientists working in the field. For example, this year's Studio I class will "travel" to Hawai'i to work with a National Oceanic and Atmospheric Administration biologist on rare pinnipeds and their rehabilitation.

Barb Putnam has held the William Wyatt Barber Jr. Faculty Chair at St. Mark's since 1997. She teaches Advanced Art History, Studio Art from beginner through Advanced, drawing, painting, and printmaking. At St. Mark's she has developed a printmaking program that extends the possibilities of drawing and incorporates the medium into her classes, and that has allowed students to do portfolio exchanges and shared assignments with colleges such as Wellesley, Bowdoin, Iowa State University, and the University of Wyoming. From 1986 through 2012 she chaired the St. Mark's Art Department. She has also taken up the mantle of the late Jay Engel by organizing and leading the annual Opera Trip over the past two decades. 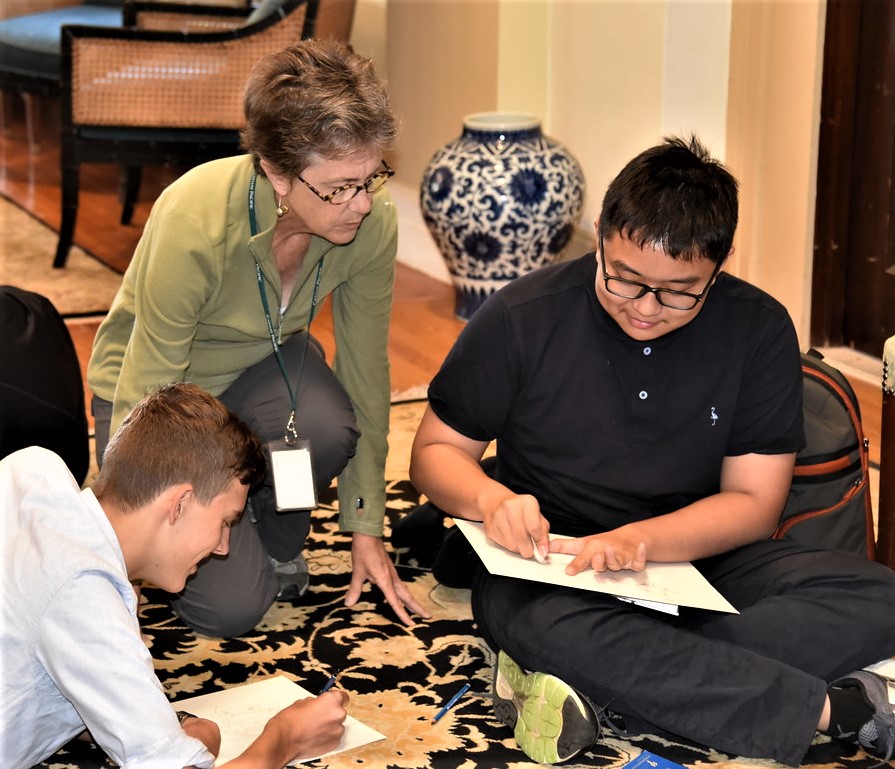 "Philosophically," she says, "I don't see any separation between what I do as a teacher and what I do as an artist. I bring exhibitions to school of people I meet professionally and try to connect students with relevant artists in colleges and universities that might be responsive to their work. Being a practicing artist makes me a continuous learner, experiencing the limits of materials, experimenting with solutions, failing and succeeding. It has always helped me to be able to honestly tell students that I struggle with a skill or concept, and watch them push past what they thought of as the borders of their imaginations and discovering solutions I could not possibly have imagined is a source of ongoing joy and fuels my desire to work hard with and for each of them."

At St. Mark's 2020 Convocation ceremony, held virtually on Friday evening, September 11, Head of School John C. Warren '74 recognized Ms. Putnam, saluting her ascension to position of Senior teacher—a role that has played an important part in the history of the School.

The tradition of the Senior Teacher at St. Mark's goes back almost to the School's beginnings. The first Senior Tutor—as the position was originally called—was the Rev. Frank Bradley Lewis. In only his second year at St. Mark's, Lewis was indeed the most senior member of the faculty when headmaster George Herbert Patterson appointed him to that position in the autumn of 1868. There was no assistant headmaster in those days, so the Senior Tutor was essentially second-in-command. As Patterson had not yet been ordained an Episcopal clergyman (although he was well into the process), the fact that Rev. Lewis was also qualified to minister to the spiritual needs of the St. Mark's community might also have played a role in the headmaster's decision.

From then on, with very few exceptions, the member of the faculty with the most years of service at the School would hold that title. Eight different men would serve as St. Mark's Senior Tutor during the School's first three decades, including one alumnus (Morris Hickey Morgan, SM Class of 1877, who would be Senior Tutor for just one year before going on to a long and successful career as a Classics professor at Harvard) and a pair of brothers (James Frederic Olmsted, Senior Tutor in 1887-1888, and William Beach Olmsted, who followed his brother in that role). The second Mr. Olmsted still held the position in 1894, when the title was formally changed to Senior Master.

Olmsted was succeeded as Senior Master by William Wyatt Barber Sr., who would hold that post for a record 40 years. His son, William Wyatt Barber, Jr., SM Class of 1928, would join the faculty in 1932 and become the School's ninth headmaster in 1948. The names of the Senior Masters after the senior Mr. Barber's retirement in 1937 are a litany of St. Mark's faculty greats: Baldy, Goodridge, Lawrence, Saunders, Marr, Sawyer, Gaccon, Sheppard, Wales, Rader, Engel, Large. In 2010, veteran English teacher Andy Harris made history as the only Senior Master to have begun his SM career on the faculty of the Southborough School. They were, of course, all men. Anna Pliscz, who taught science at St. Mark's for 36 years, was the first woman to have full faculty status at the School but was never its senior member.

And Barbara Putnam has not forgotten Ms. Pliscz (at right) and her legacy. "At St. Mark's I have had many mentors," she recalls. "However, Anna Pliscz stands out. She showed a new and inexperienced teacher by her example the importance of kindness along with firm and clear expectations, and she demonstrated professionalism in working with each student to unlock the potential she believed every young person has. Anna and I enjoyed a long friendship, she was the person I needed to meet when I first came to St. Marks, and I treasured her curiosity and guidance."

When longtime math teacher Rick Umiker became Senior Master in 2015, he decided that a change in its title was long overdue. . "I see the noun master as carrying an undeniable implication of the masculine," he would explain. "Beyond that, I feel responsible for explaining a tradition of referring to SM teachers as masters, despite having never worked at St. Mark's during such a time. I understand and honor the notion of teachers as masters of their craft, and even appreciate the notion of using master as an adjective, as in 'master teacher.' That is something to which all can aspire. However, we have reached an era, in this century, for which the word master, in reference to our classrooms, too likely connotes leadership that is domineering." And, as he noted, male-centered. As the next most senior faculty after Mr. Umiker was Ms. Putnam, he felt that the title should clearly reflect the potentiality that one day a female faculty member would hold that position. "I also fear," said Umiker, "that the word is laden with so many other negative connotations that the work that I have done in making St. Mark's a more gender and racially diverse place is somewhat undermined by my acceptance of such a title. In 2015, our teaching faculty respectfully refer to themselves and our colleagues as teachers, not masters. Therefore, I believe it is time to refer to the most senior member of that group as the Senior Teacher." 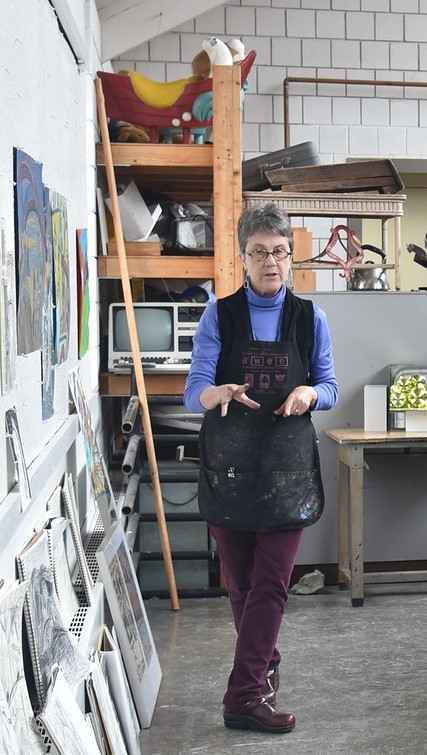 So with Rick Umiker's retirement, Barbara Putnam becomes the School's new Senior Teacher. Since the 1970s, the role has been essentially symbolic. The Senior Teacher has a special seat in Chapel, has the right to speak first at faculty meetings, and is relied on by younger faculty and administrative leadership to provide perspective, insight, and advice. But Ms. Putnam's elevation to the position in the autumn of 2020 is more significantly symbolic than just custom and tradition. Young women have attended classes at St. Mark's since 1972, and St. Mark's has been a fully coeducational institution since 1977. Now, almost fifty years after the first girl set foot in a St. Mark's classroom, a woman is the School's Senior Teacher.

"The School has changed so much over the years," said Ms. Putnam at the 2020 virtual Convocation ceremony. "St. Mark's has encouraged me to broaden my teaching. We are all learners, bringing our curiosity and tenacity to problem solving." She acknowledged the value in the interrelated nature of experiences at St. Mark's. "Let the intersections between disciplines reform and shape your interests," she advised the students attending the event.

"Ever since I began as Head of School in 2006, Barb Putnam has provided me with wise counsel and important perspective," says John Warren '74. "Barb is such a splendid role model for so many at St. Mark's. Her commitment to our School, to our students and her colleagues, and the extraordinary quality of her teaching are truly inspiring. Just as Barb learned the essence of what makes St. Mark's St. Mark's from veteran teachers when she started out, Barb is providing that same insight to recent generations of new teachers."