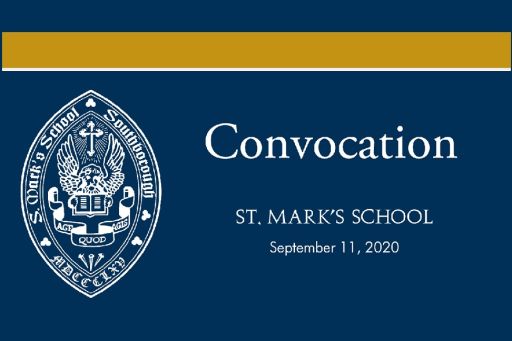 New faculty members were then introduced to the community (see below), and veteran math teacher Scott Dolesh was welcomed back from his sabbatical year.

Head of School John C. Warren '74 then delivered the Convocation address, entitled "Becoming Truly an Anti-Racist School." In it, he quoted author Ibram X. Kendi's powerful book How to be an Antiracist (One World Press 2019) which many in the St. Mark's adult community read this summer: "To be antiracist is to view national and transnational ethnic groups as equal in all their differences . . . To be antiracist is to view the inequities between all racialized ethnic groups as a problem of policy . . . Being an antiracist requires persistent self-awareness, constant self-criticism, and regular self-examination." He also quoted from Barbara Brown Taylor's Holy Envy: Finding God in the Faith of Others (HarperOne 2019)—"God created the conditions for multiple interpretations of everything that required speech to describe. There was no longer one right way to say a true thing. There were many ways to say it. Torah. Veda. Dharma. Gospel. Qur'an. Even when those words pointed to different things, you could see how much they meant to the people who said them"—and he committed himself and the School to creating an anti-racist community at St. Mark's.

Dean of Academics Nat Waters then announced the returning students who earned honors as Scholars and St. Mark's Scholars (see below). Some 200 students from last year's III, !V, and V Forms were so recognized.

Current VI Formers Libby and Tommy Flathers then led the virtual crowd in the hymn "Promised Land" (their performance pre-recorded in St. Mark's Belmont Chapel). This was followed by Assistant Head of School and Dean of Faculty Samantha Brennan recognizing faculty milestones for years of service to the School (see below).

Mr. Warren honored Barbara Putnam, beginning her 42nd year on the faculty, as the School's new Senior Teacher, recognizing the historic significance of the occasion, as Ms. Putnam is the first woman to hold that position. Ms. Putnam then announced the installation of two faculty members as honorary St. Mark's alumni (see below).

Selected by a vote of the faculty to a rising VI Former who embodies the intellectual and community service priorities characterized by Dr. Clair's life and career. A celebrated medical researcher, practitioner, and innovator, Dr. Clair has worked tirelessly to enhance the educational and economic opportunities for underserved members of his community.

Selected by a vote of the faculty to the rising VI Former who best embodies the global citizenship priorities that distinguish Ms. Hung's life and career. The founder and director of a highly successful international business operating on multiple continents, Ms. Hung has been instrumental in the establishment of a St. Mark's partner school relationship in China.

Selected by a vote of the faculty to the rising VI Former who best embodies both the academic and the community and equity priorities that characterize Dr. Saccio's life and career. A leading Shakespearian scholar, who has participated in and steadfastly supported the arts, Dr. Saccio has been a strong voice for diversity, and a thoughtful source of support for students, particularly those in the LGBTQ community, throughout his career at Dartmouth College.

Selected by a vote of the faculty to the rising VI Former who best embodies the character qualities inside and outside the classroom that Ms. Anderson emphasized during her tenure on the St. Mark's faculty. The first woman to teach advanced math courses at St. Mark's and the coach of numerous ISL and New England championship teams, Ms. Anderson steadfastly inspired collaboration, resilience, and rising above one's own expectations.

Given in memory of Peter M. Schuh '92, awarded each year to a rising VI Former based on the following criteria:

•Participation in more than one varsity sport

•Exhibition of leadership as a Monitor, Editor, Prefect, Peer Discussion Leader or other similar position and

• If each of the first three qualities are met, the recipient shall exhibit exceptional loyalty to, and enthusiasm for, St. Mark's School The recipient of the Schuh Award is selected by vote of the Dean of Academics, the Dean of Students, and the Director of Athletics.

Given in memory of Andrew Michael Sheridan '05 and each year is awarded to the rising VI Former who best exemplifies the character of Andrew, as remembered with these words:

"Through acts of kindness, optimism, faith in God and humanity, hard work, and gentle humor, Andrew strived to do what is right and shared his joy of life with others...every day. In so doing, he encouraged us to believe in ourselves and inspired us to be our best." The recipient of Sheridan Prize is selected by a committee that includes the Dean of Students, Dean of Academics, Director of Athletics, and Chaplain.