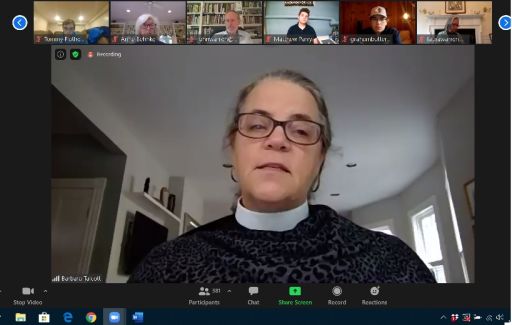 After the opening collect, Head of School John C. Warren '74 welcomed 12 new full-time faculty: Andrew Bergdahl, Franklin Chen, John Daves, David Friedman, Maggie Kelly, John Kennealy, Downing Bray Kress, Lauren Martin, Visaury Moreta, Maureen Russo, Devin Worthington, and Viva Zhao. "Each of these adults," said Mr. Warren, "brings to St. Mark's a unique set of talents and perspectives, further strengthening our School community. May we be open to their own unique ideas and ways, and continue to support them as they learn about and contribute to St. Mark's."

One by one, the newest members of the St. Mark's faculty responded affirmatively when asked "do you commit yourselves to this new trust and responsibility?" by Rev. Talcott, who then charged "charge all of you who are here this morning, students, faculty, staff and administrators, to support and uphold them in their life and work among us."

Prayers from the Rev. Katie Solter—St. Mark's associate chaplain—and from student members of the Interfaith Chapel Council, were followed by the anthem, "Baba Yetu" (the Lord's Prayer in Swahili), sung by the St. Mark's choir and recorded last year.

For the text of each reading and all of the sermon "On Dignity" see below.

The service continued with Assistant Head of School and Dean of Faculty Samantha Brennan charging the new faculty to "serve our students wisely, warmly and compassionately, with high expectations, dedication, and a ready sense of humor." Co-head monitors Tommy Flathers then asked that they "Inspire us, coach us, advise us, teach us, and learn with us. Age Quod Agis!"

Mr. Warren concluded the installation ceremony by once again welcoming the School's newest teachers and into the St. Mark's community. "May you find meaning and fulfillment," he declared, "as we work side-by-side as learners, animated by our mission to help prepare students for lives of leadership and service."

After Mr. Warren led everyone in reciting the School Prayer, Libby and Tommy Flathers sang the hymn "For the Splendor of Creation" and Rev. Solter gave the concluding blessing. The service ended with Mr. Wallace playing the conclusion of a Mendelssohn sonata on the Belmont Chapel organ.

A Reading from Socio-Political Activist Arun Gandhi: The best way to understand Gandhi's philosophy of nonviolence is to first understand the extent of the violence we practice, consciously or unconsciously, every day of our lives. We generally deny our own violence because we are ignorant about it or because we are conditioned to look at violence only in its physical manifestation—wars, fighting, killing, beating, rapes—where we use physical force. We don't, however, consider oppression in all its forms—name-calling, teasing, insulting, disrespectful behavior—as passive forms of violence. The relationship between passive violence and physical violence is the same as the relationship between gasoline and fire. Acts of passive violence generate anger in the victim, and since the victim has not learned how to use anger positively, the victim abuses anger and generates physical violence. Thus, it is passive violence that fuels the fire of physical violence, which means if we wish to put out the fire of physical violence we have to cut off the fuel supply.

A Reading from the Wisdom of Novelist James Baldwin: You've got to tell the world how to treat you. If the world tells you how you are going to be treated, you are in trouble.

This year, since March, there is nothing I have been able to anticipate or rely on. And because of the extraordinary amount of work involved in starting everything, it seems, from scratch, I find I have precious little energy left to make things "come alive." Indeed, some days it has felt like I am barely alive myself. No doubt, many of you can relate: I am not used to failing so utterly, so often. The universe, it seems, is conspiring for me to lose every shred of my dignity. And it seems to be conspiring for the people I know and love to lose every shred of theirs, as well.

I want to talk about Dignity, because it is a word I have stumbled across recently, with the help of Donna Hicks, a career specialist in conflict resolution. The right word is like the right key to unlock a door, to translate hieroglyphics, or to interpret an otherwise impenetrable chart. If you don't have the key, it is all a threatening unknown. If you do have the key, it all falls into place, the way it did for Helen Keller when she finally realized that her governess had been spelling "water" in her hand. Donna Hicks spelled "Dignity" in my hand.

Dignity is a thing that when people have it, and know they have it, and know that others know they have it, they flourish; they can go from height to height. Dignity is the thing that when people don't feel they have it, and don't feel that others are honoring it in them, they crater in ways that vary from self-destructive to explosive. And this is the important thing to remember in all this: Dignity is something that belongs to every human being, no matter what. It can't be taken away from you; you can just feel like it has. And you can't give it away, either. Because Dignity refers to our inborn value and worth. Every baby is born worthy. You were born worthy; and you remain worthy.

It is not a complicated thing to treat a person with dignity, and to make them feel that you are doing that. All it takes is respecting that person's inherent value as a human being, acknowledging their vulnerability, and being gentle with it. I'll say that again: 1) respecting their inborn worth (as equal in every way to your own); 2) acknowledging that just like you, they are fragile; and 3) acting accordingly.

Four years ago, I voted for Hillary Clinton. And I probably would again. She has so many qualities that would make her valuable in a leadership role like the presidency. And yet, I do know why she didn't win the election; I do know why the Democratic Party has had a lot of learning to do over the past four years. There has been a deficit in Dignity that was pretty well concealed until, in an unguarded moment at a campaign fundraising event four years ago, Hillary Clinton asserted that half of Trump's supporters represented "a basket of deplorables." She went on to label the heck out of them, and to describe them as "irredeemable." And there was laughter all around.

A "Basket of Deplorables." That does not signal that you recognize ANY inherent value in a person. "Irredeemable." That does not recognize and respect a person's fragility. And finally, laughter all around: apparently, this dismissive viewpoint was widespread among the members of the liberal elite who were in attendance that night. You know, I would argue that in many corners of that world it still is. Is it any wonder, then, that at the ballot box that "Basket of Deplorables" exploded in fury?

Is it any wonder that the other half of Trump's supporters (whom she was willing to accord dignity) rushed to defend them, along with many who had previously been undecided? You don't treat people that way. You don't assault their dignity like that. I don't care what party you represent; I don't care who was the first to sink to this level. Michelle Obama famously said, around the same time, "when they go low, we go high." My friends, yes they did go low; they are still going low. But that is not "going high."

Professor Hicks cites the work of Naomi Eisenberger, a social psychologist at UCLA. Professor Eisenberger has done research that shows that "social pain," such as felt assaults to our dignity, activates the same neural region that is activated by physical pain. Socially painful experience is at least as painful as physically painful experience, and it is processed in the same way. It has the same ability to cause long-lasting trauma. And yet, while we run to the aid of someone who is experiencing physical pain, we don't always run to the aid of people whose dignity has been assaulted. Unfortunately, it seems we are just as likely to pile on.

And yet those people are in real pain. When you hear a group of people asserting that "Black Lives Matter," or when you hear the assertions of self-worth on "Black at St. Mark's," you hear people asserting their Dignity--people who have had every reason to suspect that they have not been accorded it. You hear people saying what they, this school, and our world need to hear: "You do not determine my Dignity. My Dignity is a God-given thing. You may differ from me in many ways: in status, in wealth, in opportunity; but you will never exceed me in Dignity." That assertion of our Dignity is the truth that we all must speak to Power. But first, we have to speak it to ourselves. Because a person who is not sure of her own dignity will have difficulty acting in a dignified -- and dignifying -- manner. A person who does not know her own inherent worth will have difficulty acting in a worthy way. Nelson Mandela famously said, in his book Long Walk to Freedom, that the day he realized the prison guards' strategy was to deprive prisoners of their dignity was the day he knew that he would survive. "Because," he writes, "any man or institution that tries to rob me of my dignity will lose, because I will not part with it at any price or under any pressure." And he did not. And he was one of the most dignified human beings the world has ever known.

We are all giving ourselves a lot of tests these days, and there are more to come. So give yourself one more. Test your own sense of self-worth; test your own sense of Dignity. Signs that it could use some work are varied and unfortunately quite common. They include: taking the bait, trying to save face, avoiding confrontation, assuming you are the only innocent victim, resisting feedback, refusing to accept responsibility, gossiping. In a word? Going low when they go low. Please, I beg you: have more Dignity than that.

It is four years since we were so publicly encouraged to think of some of our fellow human beings as deplorable. What do you think? Can we make it through the 2020 election with more dignity than that? Can we affirm our own self worth and also the inborn worth of others? Can we admit and honor our own vulnerability, and have compassion for theirs? The late Ruth Bader Ginsburg, who seemed to have no difficulty recognizing and honoring the dignity of others (including her polar political opposite on the Supreme Court, Antonin Scalia, whom she counted as a friend), famously said: "fight for the things that you care about; but do it in a way that will lead others to join you." Can you lead others to join you? Can you make them feel that no matter your differences, you respect their inherent worth and care about their vulnerability?

COVID is hard. Hybrid teaching and learning is hard. Mask-wearing and social distancing are hard. Hearing that school will be remote on one day, and then two weeks later hearing that it will be conducted in person is hard. The upcoming election will be brutal--for all of us. The universe, it seems, is conspiring to assault our dignity at every turn. So Resist. Assert your own worth and your own vulnerability. Assert the inherent worth and vulnerability of other people, including -- maybe especially -- those who are not currently returning the favor to you. When the universe goes low, can St. Mark's go high? That chapter, my friends, is ours to write.