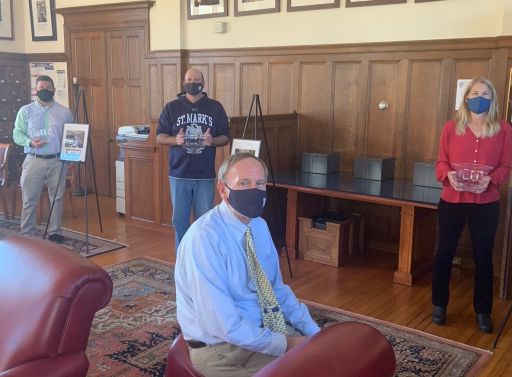 On Thursday, November 5, Head of School John C. Warren formally recognized three new members of the St. Mark's adult community for reaching the 20-year milestone for service to the School.

At a safe and socially distanced ceremony in the faculty room, Mr. Warren presented Tim Capenito, Scott Dolesh, and Kinne McBride with beautiful glass bowls commemorating their 20 years at St. Mark's. Framed photos of each were also unveiled. They will be hung along the corridor between the dining hall and the Hinkle Room, alongside the pictures of other faculty and staff who have served St. Mark's for 20 years or more.

All three arrived on campus in the fall of 2001. Tim Capenito has been the plumber in the School's Facilities Department for the past two decades. Scott Dolesh has been a member of the Mathematics Department during that time and has also coached athletic teams, including ice hockey and golf, at various levels. Another math teacher, Kinne McBride has worn many hats during her time at St. Mark's. For the past several years she has been the School's associate dean of academics and academic scheduler, and she also coaches crew.