Wednesday, November 11, 2020, was the first National Letter of Intent (NLI) signing day for high school athletes committing to play at the Division I level for college and university sports programs. Six current St. Markers have signed NLI agreements, and their names were announced virtually by Director of Athletics John Levandowski at the regular all-school meeting on the same day.

Jackson Coutu '21, a day student from Upton, Mass., has committed to play lacrosse at Providence College. An All-ISL selection, Jackson led all ISL midfielders in scoring as a IV Former, then COVID-19 caused his 2020 season to be cancelled. "A complete and gifted player, Jackson plays great defense but really shines on the offensive side of the ball," says St. Mark's boys' lacrosse coach Eric Brockett. "He combines stick skills with strong, creative dodging and high game IQ, making him always a threat to score or initiate. His deceptive speed and natural ability to run past players and see the field make him devastating in transition." Coutu is excited to be joining the Providence Friars program, which was 5-1 in its own abbreviated 2020 campaign, ranked third nationally in scoring defense, defeating Brown for its second Ocean State Cup championship in three years.

Megan Miantsoko '21, a boarder from Bronx, New York, will be rowing for UMass Amherst. "Megan is a highly competitive athlete who performs at her best when the stakes are greatest," says St. Mark's crew coach Caleb Corliss. "She is an observant, inclusive leader who pays attention to what her teammates need and challenges them to improve every day." The UMass Amherst women's rowing program has won the Atlantic-10 championship 16 times.

Trevor Neff '21, a boarder from Stow, Mass., has committed to playing baseball at Holy Cross. St. Mark's head baseball coach Rob Calagione has nothing but praise for Neff. "Trevor joined the team as a new IV Former and immediately assumed an important spot in the lineup and the pitching rotation," says Calagione. "As evidenced by his selection as a team captain for the 2021 season, Trevor is a hard worker and serves as a role model for his teammates. I am sure that he will make many meaningful contributions to Holy Cross baseball." Holy Cross is the only New England college baseball program ever to win the College World Series and the Crusaders have been regular contenders for the top spot in the Patriot League over the past decade.

Alicia Souliotis '21, a boarder from Acton, Mass., has declared her intent to play lacrosse for the University of California at Berkeley. The starting goalie for St. Mark's girls' varsity lacrosse since her III Form year, Souliotis led the Lions to ISL championships in 2018 and 2019, and she tied the School's single-season record for most lacrosse victories by a goaltender with 17 as a IV Former. "Alicia has been an amazing leader of our defense," says girls' lacrosse head coach Channing Weymouth. "She is smart, reliable, and takes responsibility for the entire defensive unit. It's nearly impossible to shake her confidence or her focus, and she is an absolute brick wall in the net. She plays athletically and shows her speed and grit outside of the crease all the time. She's encouraging toward the younger, newer players and inclusive of everyone. She loves the game of lacrosse and spreads that joy to the rest of the team. We are so proud of Alicia for her commitment to Cal Berkeley and are excited to watch her college career unfold."

Catie Summers '21, a boarder from Amherst, New Hampshire, has committed to Brown University as a field hockey player. "Catie has played an integral role on the team both on and off the field," says SM alumna and head field hockey coach Colleen Finnerty '11. "Catie has a 'team first' mentality, playing at both center midfield and center back positions depending on the needs of the team in a particular game. Catie's passion for the sport of field hockey is contagious, and her knowledge of the game has been an invaluable resource for her teammates."

Lauren Tolve '21, a boarder from Duxbury, Mass., will play lacrosse for UMass Amherst, a program which has made it into the NCAA tournament a dozen times in the 21st century. "Lauren is a fierce competitor on the lacrosse field," says Weymouth. "She has a mind for the game, with incredible vision and a wise tactical approach. She has led the team confidently and is known for her toughness, streaking fast movements, and powerful precision shots. Lauren was the third leading scorer in 2019 with 40 goals (and 15 assists), many of which were game changing points. Lauren is fast; she's fearless; and she never backs down from a challenge. Others are intimidated by her out there and rightfully so. Lauren gives everything she's got for the team and for the win. We are so proud of Lauren for her commitment to UMass Amherst and look forward to seeing her play in-person since she'll be nearby!" 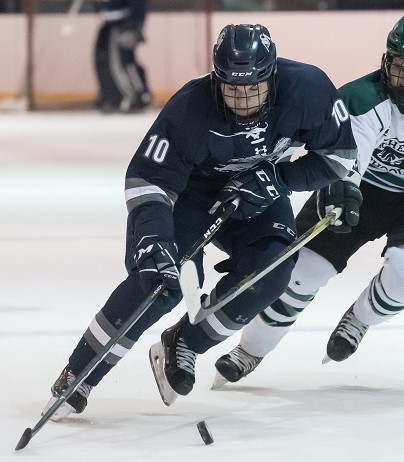 Additionally, some young alumni have lately signed with D1 programs. Most recently, Danny Ciccarello '20 (at left) has committed to play ice hockey for Rensselaer Polytechnic Institute. The RPI Engineers have been regular contenders in the scramble for the ECAC D1 crown over the past dozen seasons. "To say that he was a leader on and off the ice is an understatement," says veteran SM hockey coach Carl Corazzini "He embodies everything we try to teach at St. Mark's. He is one of the best we have ever seen for St. Mark's hockey. He is a two-time All-NEPSAC first team player, three time All-ISL, and the ISL MVP in his senior year. He graduated with 86 goals and 163 points. What an impressive career for an impressive young man. RPI is lucky!"

"It's a very special day for these St. Markers," said Mr. Levandowski. "It is the culmination of years of hard work and dedication. Their success is a real testimony to their talent and their commitment."

This spring, St. Mark's will host a ceremony recognizing all students who will be playing college and university sports next year, across all Divisions.