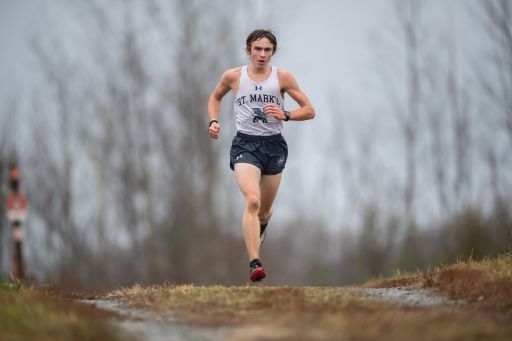 St. Mark's boys cross country has not been able to run any live races during the 2020 season because of the pandemic, but it has enjoyed some "virtual" races, where teams run on their own campus and then compare times.

Recently, St. Mark's ran such a virtual race against three strong prep competitors: Exeter, Deerfield, and St. Paul's. Each team ran a 5K on a track. While there were no official scores to report, Josh Bergers '22 ran a remarkable 15:33, which is the fastest 5K by a St. Mark's harrier in at least the last 20 years, and possibly of all time. Many others also set individual all-time 5K personal records, including Captain Nick Haugen '21, Captain James Lammert '21, James Nichols-Worley '23, Steven Zha'24, Sebastian Rome '23, Will O'Malley '24, Thanos Nicolopoulos '24, Arjun Yeraboth '23, and Jason Wang '23.

On Friday, November 13, the St. Mark's team moved from the track back onto its home course, where Josh Berger had a 16:05. It was a bit mushy from the ran, according to coach David Lyons, but it was still the second-fastest time on the current SM course, behind only the course record on that venue: 15:54, set by Liam Monheim in 2015.